The U.K. needs to act on bilateral agreements post Brexit, says new UNCTAD research: although roll-over trade deals have been agreed with several countries, about 20 percent of U.K. non-E.U. exports are at risk of higher tariffs from countries such as Turkey, South Africa, Canada and Mexico.

The new UNCTAD research shows that if these agreements are not concluded by exit day, it would cost the U.K. economy almost $2 billion in exports. Sectors such as apparel, textiles, motor vehicles and processed food products would face higher tariffs, with losses as high as $750 million in the motor vehicles sector. 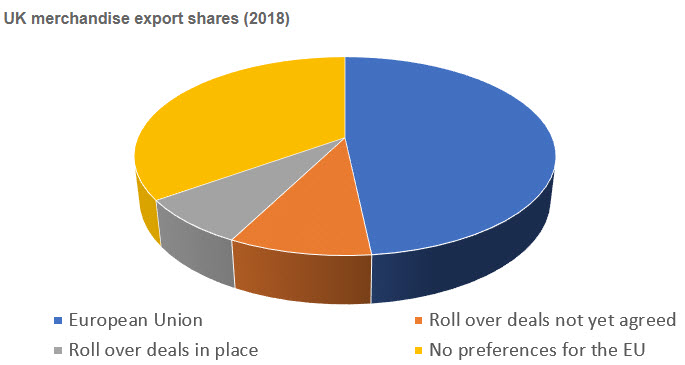 This comes at a time when the E.U. is concluding several agreements with various important partners, like Vietnam and South American (MERCOSUR) countries. These agreements, if not matched by equivalent agreements by the U.K., will result in additional losses for U.K. exporters.

However, these outcomes pale in comparison to the export losses that the U.K. will experience in the E.U. market in the case of a no-deal Brexit. UNCTAD’s research indicates that a no-deal Brexit will result in U.K. export losses of at least $16 billion, representing an approximate seven percent loss of overall U.K. exports to the E.U. Most of the U.K. losses in the E.U. market would be concentrated in motor vehicles ($5 billion), animal products ($2 billion) and apparel and textiles ($2 billion).

UNCTAD cautions that these losses would be much greater because of non-tariff measures, border controls and consequent disruption of existing U.K.-E.U. production networks.

The nearing Brexit deadline, along with increased uncertainty on outcomes, is problematic for U.K. exporters, and policy solutions are likely needed for at least short-term relief, states the analysis.

The research is available here.