The Type 45 destroyer HMS Dragon has completed her sixth drug bust on the Middle East's "Hash Highway," seizing more than two tonnes of hash in a single boarding. The sale of these drugs is a known source of funding for terrorist organisations and criminal networks.

The suspect vessel, a wooden dhow, was spotted by the warship’s helicopter during a night-time sortie. After closing in and taking a closer look, HMS Dragon decided to investigate further.

Launching her two fast sea boats, each one carrying a joint boarding team of sailors and Royal Marines, they swooped on the dhow. After questioning the master and crew, the boarding team determined that the dhow was not likely to be conducting legal activities, and they began a search. They uncovered 101 bags containing a total of about 2,000 kg of hash. 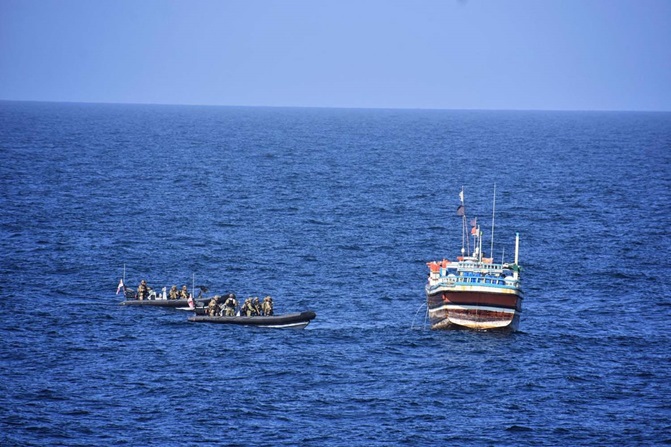 “The efforts of the boarding team in difficult conditions allowed the process to be quick and efficient, and we’re thrilled HMS Dragon scored her sixth drugs bust of the deployment,” said Lieutenant Jonathan Bennett, the officer in charge of the Royal Navy boarding team. After documenting the haul, the Dragon destroyed it and returned to her patrol.

In December, HMS Dragon intercepted $100 million worth of hash within 48 hours - a new record for the Combined Maritime Forces, the multinational organization in charge of policing the region.

"These significant seizures stop cash flow to terrorists, hurt criminal gangs who fund them and hinder the supply of harmful drugs to streets around the world, including Britain," said UK Defence Secretary Gavin Williamson in a statement.