Sweden Supports Use of Batteries and Shore Power to Cut Emissions

The Swedish government is helping to fund a demonstration project incorporated into two new tankers being built in China that will enable the vessels to eliminate emissions while arriving and departing port, as well as on berth operations. Terntank is building the vessels equipped with batteries, while the Port of Gothenburg is also proceeding with a first-of-its-kind installation to provide shore power to tankers while on berth.

Terntank told the Swedish news outlet Sjöfarts Tidningen that Swedish Environmental Protection Agency through its Klimatklivet investment fund dedicated to pursuing efforts to reduce emissions has awarded a grant for the hybrid solution. In addition to dual-fuel machinery that can be run on liquid biogas or natural gas, the two newbuilding 15,000 dwt tankers will each be outfitted with a DC Link Battery Storage System and shore power connections. The battery pack will provide 420 kW of power and can also serve as a backup power source while the vessel is at sea.

According to the company, the combination of these systems will eliminate emissions from the auxiliary machines during maneuvering to port and during cargo handling. Line executives told the news outlet that they expect to save a total of approximately 1,000 operating hours per year for the auxiliary machines, resulting in an estimated combined reduction of more than one million carbon dioxide equivalents from the batteries and shore power.

The two tankers are being built by China Merchants Jinling Shipyard, Yangzhou. Construction began on the first one in late 2020 and the second one in May 2021. Each of the vessels will be 482 feet in length, and they will operate on the Baltic and the North Sea. 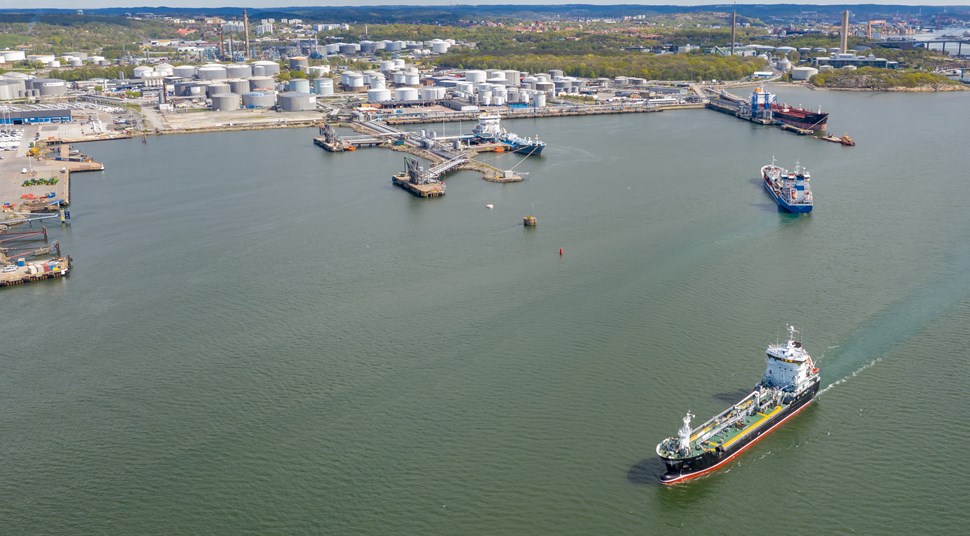 The investment in shoreside power at the Port of Gothenburg Energy Port is also partly financed by Klimatklivet, which granted the port over $1 million to support the expansion of its shore power network to meet the high-power demands of tankers. Shore power will be available at the tanker terminal in 2023. The Port of Gothenburg was one of the first ports in the world to offer shoreside power for vessels. Shoreside power is now available at the Stena Line berths and two of the berths at the Gothenburg Roro Terminal.

The Port of Gothenburg is also part of a broader initiative announced by a collation of Northern European ports to expand and coordinate their shore power supplies. The goal is to provide a consistent shore power technology, making it possible for containerships moving between the ports to have a compatible system for all their in-port operations.

The use of batteries to provide near-in operating power is drawing increasing interest from more segments of the shipping industry. North Sea and Baltic ferry operators among others are working to incorporate this capability into newbuilds.