Suspended Exporter Might Use Sister Company to Ship Sheep

Australian media reports indicate that executives associated with Emanuel Exports, the company at the center of the nation's most recent live export cruelty debate, might apply to use the license of sister company EMS Rural Exports to export 60,000 sheep stranded in Western Australia after its license was suspended in June.

Whistleblower footage released on a 60 Minutes program in April showed images on board an August 2017 voyage of the Awassi Express to the Middle East for Emanuel Exports when 2,400 sheep died of heat stress. Throughout the program, whistleblower footage from five separate voyages is aired depicting thousands of sheep suffering severe heat stress; sheep caked in melted feces and urine; injured and sick animals left to die slowly; decomposed bodies left in pens with living sheep and pregnant ewes giving birth and their lambs dying.

As a result, Emanuel Exports has become the subject of a criminal investigation and an animal cruelty investigation for breaches of the Western Australian Animal Welfare Act. The company has also been served with Show Cause notices by the Federal Department of Agriculture for recent and historical breaches of live export regulations.

Australian live sheep exports spike in demand in the lead up to the Muslim Festival of the Sacrifice in September, and if permission is granted for an EMS license, the sheep would be loaded on to the Kuwait-flagged Al Shuwaikh which is currently docked at Fremantle in Western Australia.

The government's own review, the McCarthy Review commissioned after the Awassi Express footage was aired, called for a range of stricter animal welfare controls, one of which in particular would have rendered the Middle East sheep trade unviable. However, the government did not accept the particular recommendation without further review, and if the sheep are not shipped, there is debate about what their fate might be. 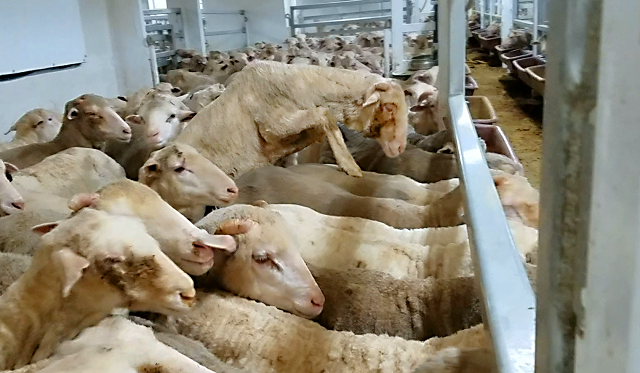 Animals Australia says it is deeply concerned about reports that the Department of Agriculture may allow an exporter at the center of an animal cruelty investigation to ship the sheep to the Middle East. If allowed, the animals would be shipped from Australia's winter-time into the height of the Middle East summer.

“This exporter has been publicly shamed. They have brought their industry into disrepute, yet rather than reflect on this, they are intent on inflicting further suffering,” said Animals Australia’s Lyn White. “The Department has the power to suspend the licenses of all related companies. The public would quite rightfully expect nothing less in the circumstances.

“The Turnbull government promised to clean up this industry. There will be public outrage if Emanuel Exports, albeit under a different name, is allowed to proceed with this shipment. It is our view that the granting of an export permit to allow this shipment to leave would be unlawful and we will be exploring all available legal options,” said White.

Graham Daws was the Director of Emanuel Exports at the time of the Awassi Express shipments. He has reportedly quit the board of the live sheep export companies he founded in a bid to smooth the way for the departure of the 60,000 sheep, leaving his son as sole remaining director of EMS.

At the end of June, a motion was passed in the Australian Senate calling on the Government to legislate for an orderly phase-out of the live sheep export trade. The motion was proposed by Senator Derryn Hinch and supported by the Australian Labor Party, the Greens, the Centre Alliance, and independent Senator Tim Storer. The motion called on the Government to provide greater certainty for the future of Australian sheep producers by compensating affected producers and investing in domestic abattoir capacity. The passing of the motion has been viewed as a strong indication of possible voting intention for the Animal Export Legislation Amendment (Ending Long-haul Live Sheep Exports) Bill 2018, which is currently before the Senate and due to be voted on in the August sitting period.