While many of the ports across Europe, and indeed around the world, are reporting strong declines in cargo traffic due to the impact of COVID-19, some ports have been reporting more positive results or even increases due to their strategy and positioning.

Rotterdam in The Netherlands and Gothenburg in Sweden are two recent examples of ports that have been able to maintain and build their traffic despite the global economic slowdown. While the 10 largest ports in Europe saw an average of a five percent decline in container volumes in the first quarter, container volumes at the Port of Gothenburg increased by eight percent. Similarly, Rotterdam reports that it has seen a strong increase in refrigerated cargo (reefer) traffic as the world’s shippers seek to adapt to the challenges of the current operating environment.

These reports are in sharp contrast to most of the world ports. For example, a research report released this week by the British Ports Association says that just 36 percent of British ports feel confident about their business outlook over the next 12 months.

Sweden chose to take a unique approach to the pandemic emphasizing social distancing measures for its citizens but not enacting the same "stay at home” measures seen around the world.

According to Elvir Dzanic, the chief executive of the Port of Gothenburg, the open approach adopted by Sweden to the world, and the fact that Swedish industry has continued to export during the COVID-19 pandemic, has contributed to the port’s performance. The Port of Gothenburg, not only experienced an increased container volume, but it also reported no canceled calls and says none are planned.

“We offer a wide range of services, a highly efficient rail infrastructure, and the capacity to remain sustainable even in more testing times,” says Dzanic. Freight flows from all over the country are increasingly being concentrated on Gothenburg as companies reassess their logistics concepts."

By being able to offer specialized services to shipper, Rotterdam has experienced an increase in traffic. According to the port, “twice as many reefer ships with conventional cargo are currently arriving at the Rotterdam Fruit Wharf in the Merwehaven. The measures taken in response to COVID-19 mean shipping companies have been unable to put enough reefer containers in the loading ports of South Africa. Consequently, these conventional reefer ships - with containers on deck and pallets in the hold - have become considerably more popular.”

A total of 36 reefers with 2,482 pallets of South African fruit, including grapefruit, oranges, pears, and lemons, were transshipped at the Rotterdam Fruit Wharf on May 17 and 18. Loading in the South African ports of Durban, Port Elizabeth, and Cape Town, these ships transported citrus fruit in containers both on deck and below deck to Rotterdam and St. Petersburg. It was the second in a series of four arrivals Rotterdam is expecting in May.

“This kind of ship usually arrives in Rotterdam once every two weeks and the number of pallets it has in the hold is considerably less,” says Peter van de Laar, commercial manager at the Rotterdam Fruit Market. He believes that a current shortage of 40 TEU reefers is contributed to the higher than normal demand for this service. “Currently, almost all fruit is transported in reefer containers. We are the only terminal in Rotterdam that is still properly equipped to receive conventional reefer ships. No one else has a cold store right on the waterfront like we do.” 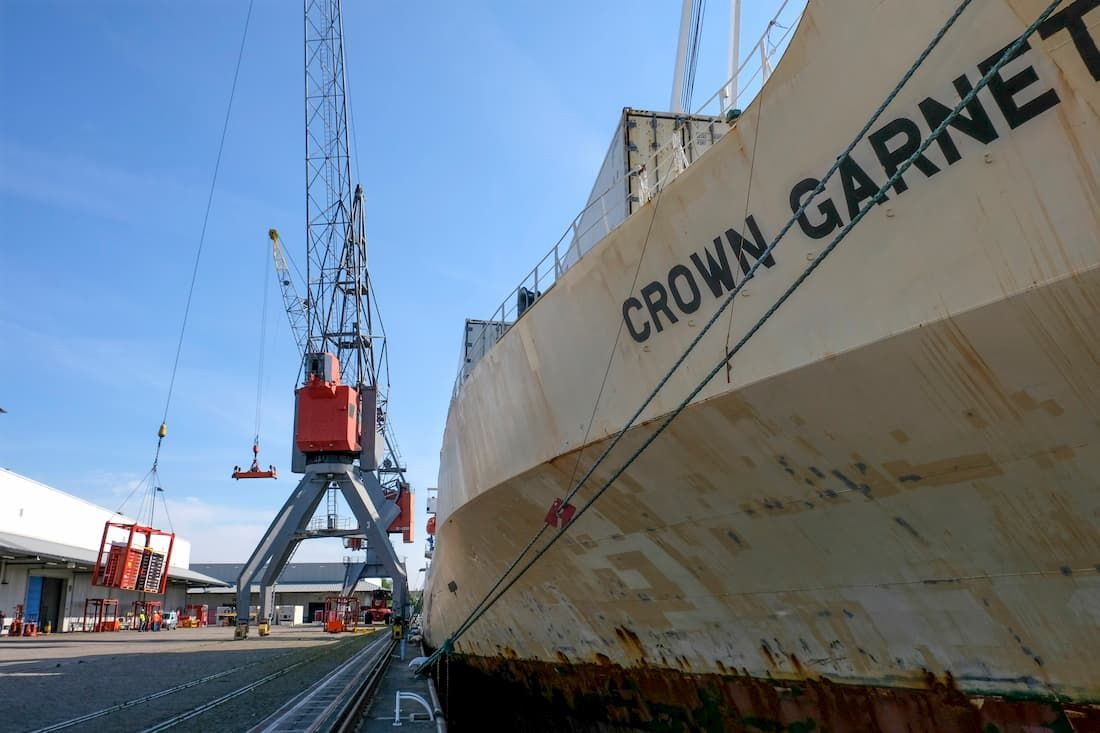 While these ports have been able to manage the current market conditions by their specialized approaches and services, many of the major ports have a less positive outlook for the near-term. Indeed, the British Ports Association published an economic recovery plan that calls for government investment to aid in the recovery. Included in BPA’s proposals are a Green Maritime Fund to drive sustainable development and help stimulate growth consistent with Net Zero aims.

The document outlines a framework for recovery, focusing on three key areas: medium-term cash flow and business support; a massive scaling up of the UK’s infrastructure ambitions including a Green Maritime Fund for sustainable development; and a bold and broad-based inclusive Freeports and fast track planning policy.

Divided into short, medium, and long-term initiatives, BPA’s plan proposes how government can utilize ports and the wider maritime industry, to administer aid to the economy in its first steps towards recovery, prevent longer-term economic issues, and stimulate growth.

“The Covid-19 crisis has been unprecedented in both the speed at which it has hit and the depth,” says Richard Ballantyne, Chief Executive at the British Ports Association. “Many ports have seen significant drops in volumes and activity which were impossible to predict and the impact is likely to be felt over the medium-term as the health crisis eases but the economic impact bites.”

With many of the world’s shippers continuing to express concern for the near-term outlook, ports will undoubtedly have to continue to adapt to the changing economic situations looking for new opportunities to maintain their business.