Just a month after Spain’s Pullmantur Cruises announced its insolvency, two of its cruise ships have arrived at the scrapyards of Turkey, victims of the global pandemic. The 32-year old Sovereign and her slightly younger sister ship, the Monarch, both of which had been popular and successful ships until the onset of the pandemic, were also historic cruise ships holding a significant place in the development of the modern cruise industry.

Introduced in 1988 as Royal Caribbean International’s Sovereign of the Seas, the 74,000 gross ton ship at the time was not only the largest purpose-built cruise ship but also the first of the new generation of mega cruise ships. She was nearly twice the size of Royal Caribbean’s previous cruise ships, and she ushered in a new era in cruising.

While many in the cruise industry had long believed in the economies of scale and the opportunities available with a big ship, in many ways it fell to the Sovereign of the Seas to become the proof of concept for the modern cruise industry. Eight years prior, Knut Kloster’s Norwegian Caribbean Lines (today Norwegian Cruise Line) had introduced the idea of the mega cruise ship converting the trans-Atlantic liner, the France, into the first mega cruise ship the Norway. She had instantly become the ship that everyone in cruising was talking about and the one everyone wanted to book for a cruise. Royal Caribbean responded by ordering its mega cruise ship from the famed Chantiers de l'Atlantique shipyard in France, at the time the only shipbuilder with experience with building large passenger ships.

Whereas the structure of the Atlantic liner had placed some limits on the amenities the Norway could offer, Royal Caribbean building a new ship could incorporate the latest features making their cruise ship look like a modern hotel. Passengers embarked into a five-story atrium complete with glass-enclosed elevators. There were acres of outdoor deck spaces, two large pools, multiple bars, lounges, and dining rooms to appeal to the more than 2,600 passengers sailing on the Sovereign of the Seas.

The Sovereign of the Seas operated year-round seven-day cruises from Miami to the Eastern Caribbean and proved the potential of the large cruise ship. In the early 1990s, she would be joined by two sister ships, the Monarch of Seas and the Majesty of the Seas. The success of the Sovereign of the Seas would also launch multiple competitions in the cruise industry with Carnival Cruise Line responding with its own 70,000 gross ton cruise ship with an even taller interior atrium. While the Sovereign of the Seas did not have many of the amenities that are today popular in the cruise industry, she in many ways set in motion all that was to follow. Thirty years later, Royal Caribbean International would again be introducing the world’s largest cruise ships, but this time they were 228,000 gross tons, accommodating as many as 6,600 passengers.

Outclassed in the industry she had helped to create, the Sovereign of the Seas in 2008 transfer from Royal Caribbean to Pullmantur Cruises, which at the time Royal Caribbean owned and operated focusing on the Spanish-speaking market. Pullmantur refurbished the ship and with an onboard operation focused on the Spanish lifestyle now renamed Sovereign, she was equally as popular. Five years later she was joined by her sister ship which was renamed Monarch and together they helped Pullmantur grow its operations.

The sister ships had been laid up as the pandemic forced the suspension of the cruise industry. By June reports were surfacing that they were being stripped of valuable fittings and just days later Pullmantur announced it had filed for reorganization under Spain’s insolvency laws. Royal Caribbean, which continued to be an investor in Pullmantur took control of the ships, and immediately reports began to surface that they were destined for the scrapyard.

The Monarch dropped anchor in Aliaga Bay, Turkey near the “ship recyclers” on July 14. The Sovereign lingered briefly off Malta awaiting orders before also sailing east and arriving earlier this week off Turkey. The Sovereign sits out in the deeper waters off Aliaga waiting for her final orders while cruise ship aficionados and historians have taken to social media to mark the end of one of the most significant ships in the development of the modern cruise industry. 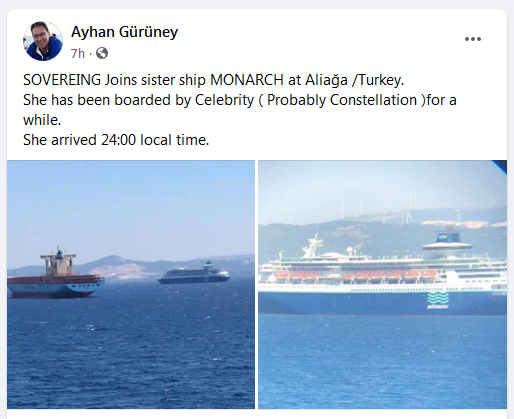