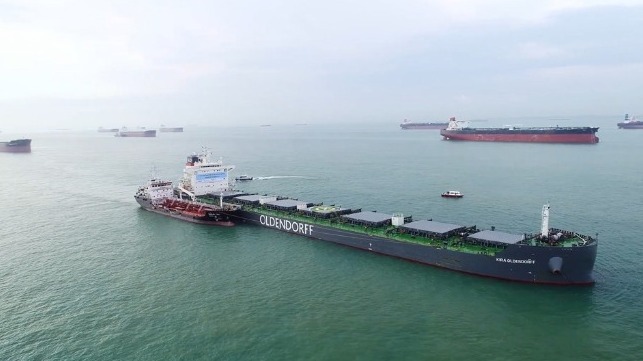 First Test of Biofuel in Singapore Conducted by BHP and Oldendorff

The Port of Santos, Brazil announced that it has received permission to substantially increase the size of containerships arriving in the port. Over the past two years, the port has been working to expand its capabilities with upgrades for its docks and container terminals all designed to position Santos as a South American hub port.

The Santos Port Authority received official permission from the Brazilian navy to increase the size of ships calling at the port. The port is now able to handle the largest containerships operating on the East Coast of South America.

The approval permits ships up to 1,200 feet in length to enter the port, an increase from the prior limitation of 1,115 feet. Significantly, the increase in length will also contribute to a growth in the capacity of the containerships. The port now expects to receive vessels with a capacity of up to 14,000 TEU versus the previous size of vessel which had a capacity of approximately 9,000 TEU.

The increase was made possible by a series of projects, including improvements and expansion of the dock to nearly 5,000 feet making it possible for the first time to handle three Panamax containerships simultaneously. The depth of the harbor at the dock was also increased to 52.4 feet and new container cranes were installed. The Santos Port Authority reports that it also worked with the pilots and university to study navigation in the port and develop new berthing and navigation plans for future operations with the larger vessels.

Currently, the port of Santos handles approximately 4.4 million TEU annually. By 2040, the port authority projects the port will have grown to 7.9 million TEU each year.

Beyond the expansion projects on the port’s facilities, the Ministry of the Infrastructure is also implementing a cabotage incentive designed to further consolidate cargo traffic at the port of Santos.

Longer-term, the port has also studied several additional expansion projects. A further deepening of the port to nearly 56 feet would make it possible to receive vessels was with a capacity of 15,000 TEU. Additional terminal expansion is also planned with upgrades to the existing facilities as well as the potential to open two new terminals. One would be for the large ocean-going vessels and the second would be in the backport for transshipments.

First Test of Biofuel in Singapore Conducted by BHP and Oldendorff

The first marine trial using biofuel aboard an ocean-going bulk vessel was completed earlier this month in Singapore. The trial was the latest in a series of successful programs in which major shipping companies used either a biofuel blend or total biofuel derived from elements such as used cooking oil, sustainable waste, and residue streams as feedstock. This trial involved a partnership between Australian energy giant BHP and German shipping company Oldendorff Carriers working with GoodFuels that supplied the biofuel...