Efforts are getting underway for the removal of the wrecked bulker OS 35 that beached five months ago after a collision off Gibraltar. Specialized assets are underway toward Gibraltar for the salvage operation which is expected to commence early in 2023.

The Gibraltar Port Authority (GPA) announced that anchor handling tug Koole 42 and Barge H283 have departed from Suriname in South America heading to Gibraltar as part of the team that will undertake the removal of the wreck. The two vessels are expected to arrive in Gibraltar at the beginning of January and will be joined by the tug Koole 31 and Barge H10030, which are currently being prepared in The Netherlands for departure to Gibraltar.

The four specialized assets will carry out the task of removing the wreck of the OS 35 that is sitting just over 2,000 feet from the shoreline of Catalan Bay. The 35,000 dwt bulk carrier came to rest in that position after colliding on August 30 with the liquefied natural gas carrier Adam LNG while the bulker was departing Gibraltar. The pilot aboard the bulker intentionally grounded her, but the vessel later broke its back, and then the authorities made the decision to sink it to prevent further pollution along the coastline.

Salvage crews are continuing to strip down the contents of the vessel to prepare for its removal. The GPA reports divers undertaking vacuuming operations have successfully removed a further 3,000 liters of oil residues from inside the hull of the vessel. The operation to remove as many oil pockets as possible from within the structure of the wreck is expected to continue in the coming weeks.

“I’m very pleased with the progress made by the caretaker salvors to remove the contents of the OS 35 in preparation for the removal of the structure of the vessel. These operations to remove oil pockets caught in the frames, as well as the stripping of the accommodation sections, has successfully prevented the potential release of large amounts of pollutants to the sea,” said John Ghio, Gibraltar Port Captain. 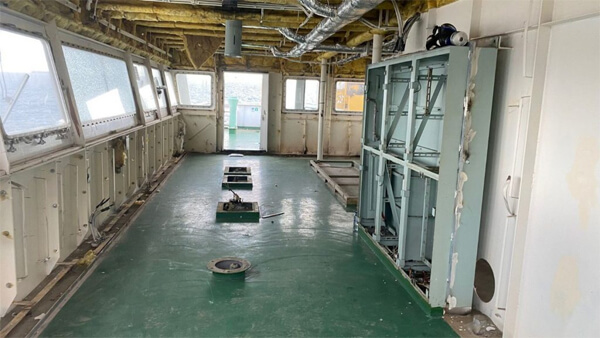 Gibraltar approved the salvage plan for the vessel in late November. TMC Marine has been managing the wreck site and after a bidding process, Koole Contractors of the Netherlands was designated to handle the removal of the hulk.  The next phase of the operation calls for the removal of the 33,632 tons of steel bars that made up the cargo aboard OS 35 and their subsequent recycling.

The ship itself will be sectioned into two halves. The plan is to lift the portions of the wreck onto a specialized vessel. The final destination will be a recycling plant to be determined. The GPA reports that the teams will take care not to affect the hydrocarbon deposits remaining aboard the ship during the effort to split it into two sections and lift the pieces.

In preparation for the next phases of the salvage operation, the current salvage team is removing debris and stripping the accommodations block. The GPA reports the efforts to remove the contents of the accommodation areas are almost complete, with only the wheelhouse section of the bridge remaining to be stripped in the next few days. The lower decks have been completely cleared of all soft furnishings, soft walls, and insulation and stripped down to their steel bulkheads.

The local authorities have set a deadline of May 30, 2023, for the removal of the ship and its contents.