RSPCA: Vietnam is the Most Dangerous Destination for Exported Cattle

RSPCA Australia is calling on the live export industry to voluntarily stop sending cattle to Vietnam until an independent review of the Exporter Supply Chain Assurance System (ESCAS) can be completed.

The RSPCA calling for the urgent review following the latest of many rounds of reports of animal welfare breaches in Vietnam, which revealed poor animal handling practices and the use of unapproved movement aids as well as the likelihood that cattle weren’t stunned prior to slaughter, and over a thousand cattle that have gone missing from the approved supply chains.

ESCAS calls for animal handling and slaughter to meet World Organisation for Animal Health (OIE) standards. The OIE guiding principles call for, among other things, freedom from fear and distress, freedom from physical and thermal discomfort and freedom from pain, injury and disease.

ESCAS requires exporters to have commercial arrangements with supply chain partners (i.e. importers, feedlots, abattoirs) in importing countries to provide humane treatment and handling of feeder and slaughter livestock from arrival through to point of slaughter.

RSPCA Senior Policy Officer Dr. Jed Goodfellow said the reports were further evidence of the systemic compliance issues in the nation. “It is clear that exporters are still struggling to maintain the integrity of supply chains in Vietnam,” he said. “Most worrying is the revelation that the supply chain breaches are intentional, with multiple reports of abattoir and feedlot workers tampering with CCTV systems and showing open hostility toward in-market export staff.

“These reports are just the latest in a horrifying history of incidents in the region, with brutal sledgehammering of Australian cattle reported in 2013, 2015 and again in 2016,” said Goodfellow. “No other market comes close to the level of ESCAS non-compliance found in Vietnam. This situation now demands an urgent response from both government and industry. The Government has got to stop looking at these breaches in isolation and start looking at the market as a whole – clearly there are continuing and systemic issues at play.”

The live export industry has had six years to get supply chains under control in Vietnam and it’s now clear they cannot get them under control, he says.

The most recent Regulatory Performance Report released by the Department of Agriculture last week details three separate incidents of non-compliance within the country involving 1,676 Australian cattle. The department has previously published assessments of 45 reports relating to non-compliance in
Vietnam. 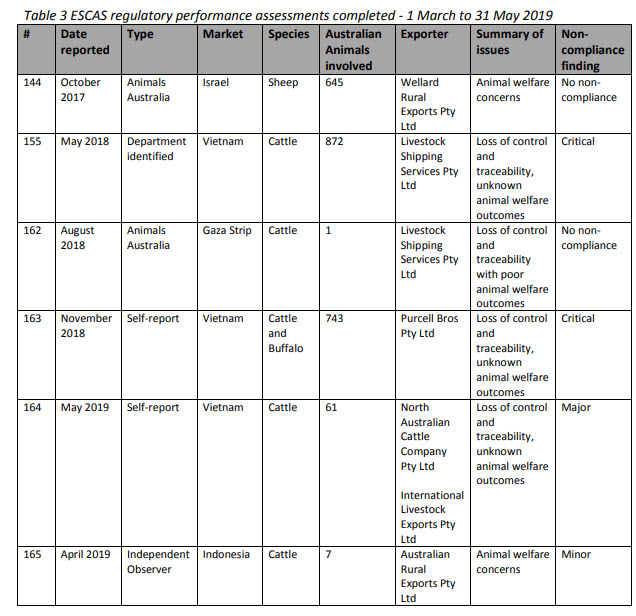 The most recent Regulatory Performance Report also investigated reports of cattle being hit, kicked, excessively prodded and having their tails broken in Indonesia.

The previous Regulatory Performance Report, released in March, involved 514 animals and included the outcomes of four new investigations resulting in six major breaches relating to animals exported to Malaysia, Vietnam and Israel, and two critical breaches pertaining to animals exported to Vietnam. The RSPCA said the report describes all too familiar scenes such as lame animals, sheep dragged by ropes around the neck and legs, trussed into the boots of cars, ear tags being removed to prevent traceability and animals being taken to private residences and slaughtered with a sawing motion.

Earlier this month, RSPCA Australia lodged a formal complaint with the federal Department of Agriculture about the brutal treatment of Australian cattle live exported to Israel.

The RSPCA has documented what it calls "A Timeline of Tragedy" here.