A tanker operating company’s decision to change masters without a handover period led to a $73 million allision, according to a National Transportation Safety Board Marine Accident Brief issued Tuesday.

On Oct. 17, 2020, the tanker Atina struck the oil and gas production platform SP-57B near Pilottown, Louisiana. The Atina, with a crew of 21, was attempting to anchor in the Southwest Pass Fairway Anchorage in the Gulf of Mexico. The platform’s four crewmembers and one technician evacuated to a nearby platform by helicopter after activating the platform's emergency shut-in system. No pollution or injuries were reported, but the estimated damage to the platform came to about $73 million.

The NTSB concluded that the tanker's operator did not comply with its own safety management system (SMS). Following the operator's emailed instructions to the agent, the oncoming master boarded the underway vessel outbound to the anchorage, only seeing the departing master on the tanker’s deck.

The new master traveled from Turkey to join the vessel, and he told investigators he had no sleep for over 50 hours while traveling. When he got aboard the Atina, he wanted to anchor the ship as soon as possible because he was tired.

However, the location he chose did not follow the passage plan. According to Atina’s passage plan, the tanker’s intended anchorage was about 3.2 miles northeast of platform SP-57B. The actual anchoring location selected by the master was just 0.7 miles from the platform.

When the master ordered the crew to slow and drop anchor at this location, the Southwest Pass pilot station called the tanker and asked her to move out to the designated anchorage area, at least four miles from the sea buoy. After complaining about how long it had been since he had last slept, the master complied and ordered the crew to raise anchor.

As they got under way, the master asked the second mate for a collision-avoidance assessment for a nearby target, which the mate incorrectly identified as the OSV Leader - a vessel located beyond the platform at a distance of about 1.5 miles. The platform was much nearer, about seven cables away. By the time the master correctly identified the platform and the risk to his vessel, it was too late. Carried by a 24-knot wind on her port side, the Atina drifted into SP-57B at a speed of 3.8 knots. 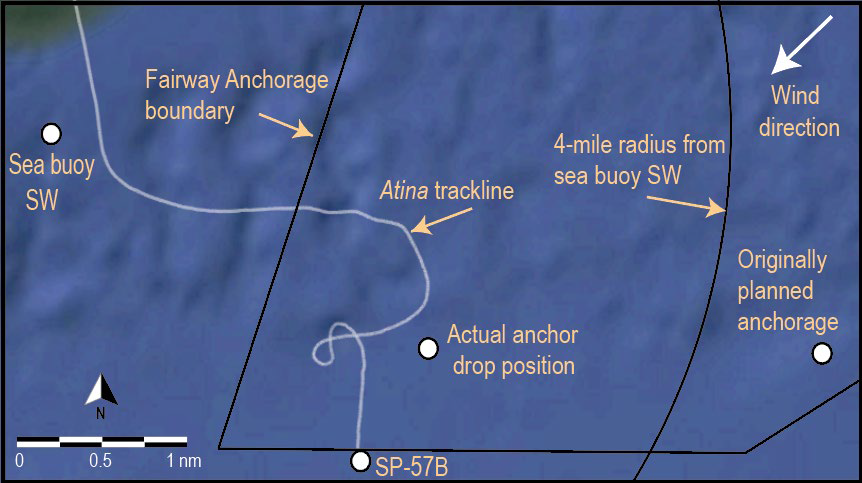 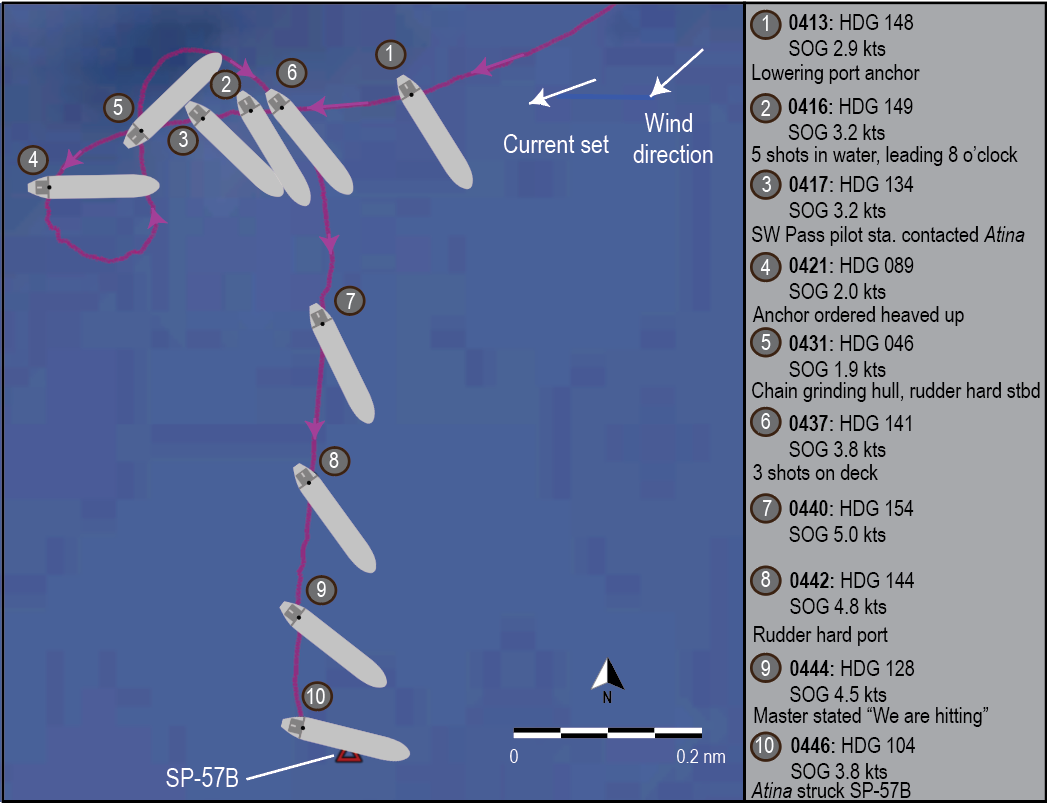 SP-57B suffered a fractured and bulged leg, as well as severed, buckled, and crushed structural members above and below the waterline, according to the platform operator. The tanker sustained only minor damage.

According to the 96-hour work/rest history form for the master, he had had no sleep in the 24-hour period before the accident, and just 19 hours of sleep in the last four days. It was his first time aboard the Atina.

NTSB investigators determined that the probable cause of the accident was "the Atina’s operating company not ensuring sufficient time for the master’s turnover, which resulted in the master’s acute fatigue and poor situational awareness."

"The company placed the new master into critical vessel evolutions, such as navigating downriver and anchoring at night, without any overlap with the departing master," said NTSB. "Vessel operating companies should ensure that joining crewmembers/personnel are given the opportunity to obtain a sufficient handover period and adequate rest before taking over critical shipboard duties, such as navigation, that could impact the safety of crew, property, and the environment."

Later that month, platform operator Cox Operating sued the Atina's operator and owner for $225 million in damages and lost revenue, then arrested the vessel to ensure payment. The operator posted a bond to release the vessel, and litigation is still under way.