The number of incidents occurring on board tug boats towing barges in the Singapore Strait is on the rise in 2019, and the ReCAAP ISC has released a special report highlighting the incidents.

According to Special Report on Incidents Involving Tug Boats and Barges in the Singapore Strait, 14 incidents have been reported so far this year (up to August 15). Of these, nine incidents reported loss of scrap metal from their barges. This is the highest number of incidents of theft of scrap metal from barges while underway in the Singapore Strait since the first incident of this nature was reported to the ReCAAP ISC in 2011. 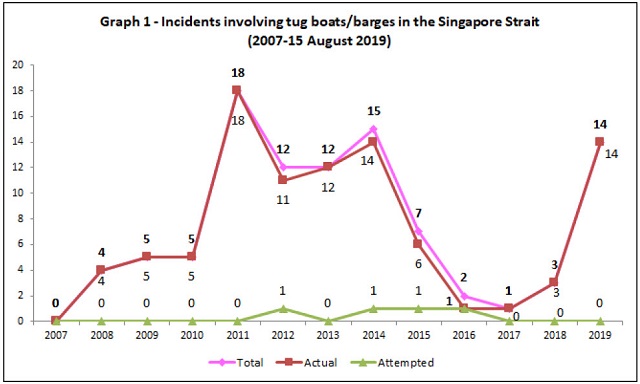 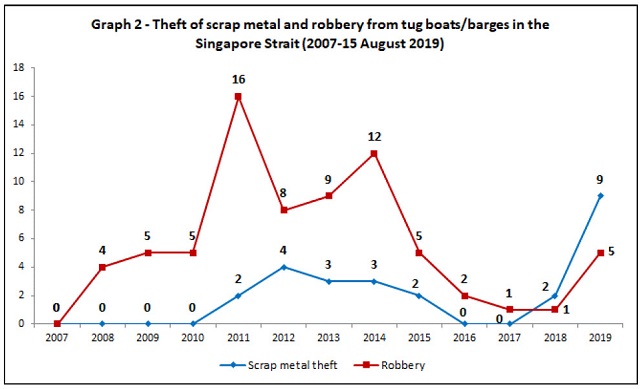 In most of the incidents, the perpetrators came alongside the barge and transferred the scrap metal into their small boats. The barge is usually loaded with a huge heap of the scrap metal and towed by a long towline. Due to the heavy load on the barge, the tug boat and barge are moving at slow speed. 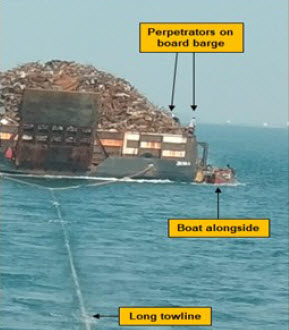 Although all the 14 incidents were CAT 4 (petty theft) in nature as the perpetrators were not armed and the crew not harmed, the ReCAAP ISC is concerned about the increase in the number of incidents.

Between 2007 and August 15, 2019, 228 incidents occurred involving tug boats and barges in Asia. Among them, 98 incidents occurred in the Singapore Strait. Of the 228 incidents, 14 were hijacking of tug boats for resale, 25 were theft of scrap metal from barges and 189 incidents involved robbery of crew's cash and personal belongings and other unsecured items. The hijackings involved the crew members being thrown off the boats and abandoned in life rafts.

The ReCAAP ISC encourages littoral States to strengthen patrols and promote sharing of information on the criminal groups involved in order to arrest and prosecute the perpetrators. Ship masters and crew are advised to report all incidents, suspicious activities and presence of suspicious small boats in the vicinity to the nearest coastal State immediately.