The months-long standoff which has resulted in dozens of bulk carriers loaded with Australian coal becoming stranded in China appears to be easing if only for humanitarian reasons. Reports indicate that the crew standard aboard one of the ships since last September is going to be permitted to go home while China will allow a few of the ships to offload their cargo and depart.

The standoff began last summer when China began refusing to permit bulk carriers arriving at the ports of Caofeidian and Jingtang in northern China to offload their cargo of Australian coal. Chinese officials said it was due to local regulations implemented in response to the coronavirus although many international analysts said it was part of an expanding trade dispute between China and Australia. Sixty or more vessels reported to anchored off the ports stranded and unable to leave or complete crew changes.

Indian officials called attention to the issue in the fall highlighting two vessels the Jag Anand with 23 Indian sailors who were stranded anywhere from six months or more than a year and unable to leave due to the Chinese restrictions. A second vessel, the Anastasia had been waiting offshore since September with 18 Indian crew onboard.

Indian government officials, union representatives, and MSC as the owner of the Anastasia all issued pleas to release the crews on humanitarian ground. MSC had attempted to negotiate an agreement for its ships to sail to another port to complete a crew change or it was even proposed to do the crew change at sea. The crew had become so despondent that one aboard the Anastasia attempted to commit suicide at the beginning of the year.

After repeated attempts by the Indian foreign ministry and the embassy in Beijing, a spokesperson for India’s Ministry of External Affairs, Anurag Srivastava, announced yesterday in his briefing that China has given permission for a crew change to take place aboard the Anastasia. The Indian officials said that the Chinese Central authorities have instructed the local authorities and port to permit the crew of the Anastasia to depart, but the specific details are still being arranged. 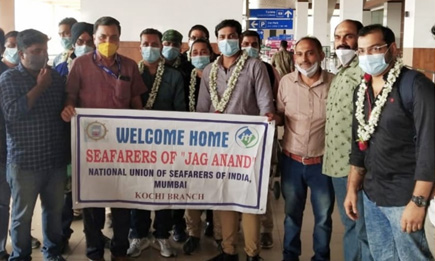 Argus is reporting that a total of eight vessels will be permitted to offload their cargo effort by the Chinese.  Among those vessels is the Jag Anand, which was among the first to arrive off the Chinese ports. The crew that had been trapped aboard for more than seven months, however, returned to India in mid-January after an agreement was reached for the vessel to sail to Japan where the crew change was completed.

While the situation has been resolved for a few of the vessels, China has not indicated that it will resume receiving shipments from the other vessels. Many of the ships have been there since October and are also seeking permission to offload their cargo and depart.