A group of Indian seafarers has found themselves among a growing number of crew trapped aboard their ships off the coast of China according to an appeal from the Indian maritime union. The seafarers are caught between two problems, a political spat between China and Australia blocking coal imports and the restrictions which prevent crew changes.

The National Union of Seafarers of India (NUSI) is appealing for 10,000 email messages to be sent to the International Maritime Organization (IMO) and Chinese authorities to highlight the humanitarian crisis. The union’s effort comes as family members of the trapped seafarers have also taken to social media to call attention to the crew members trapped at sea. 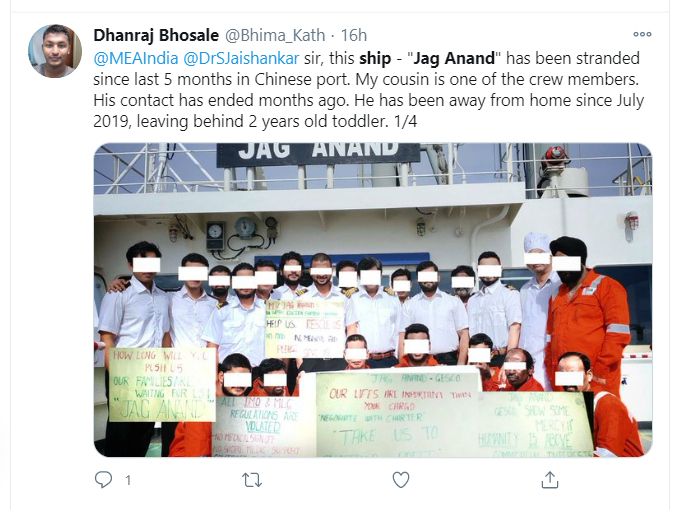 Families are taking to Twitter to highlight the seafarers' plight

While the pandemic has been complicated crew changes since the spring, this situation is linked primarily to a political dispute over coal imports. China has been one of the world’s largest coal importers sourcing as much as 40 million tons from Australia, but starting in June they began to block the arrival and unloading of coal primarily at the port of Jingtang in northern China. In an analysis conducted by Bloomberg, they estimate that as many as two million tons of coal may be trapped on 20 or more ships at anchor off the port.

NUSI is using one particular vessel, the 179,250 dwt Capesize bulk carrier Jag Anand to call attention to the problem and specifically to release the crew aboard the vessel. In the appeal the union released on November 10, it says there are 23 seafarers trapped aboard this one vessel. The union says some of the crew has been aboard for as many as 20 months, with 15 aboard at least 16 months and the remaining 8 for at least 13 months.

The wife of one of the seafarers and the cousin of another have joined the appeal posting their own messages on social media calling attention to their relative’s plight. One says his cousin has been away from home since July 2019 while the wife says her husband and many of the crew are now facing health issues. In her open letter she says the company’s doctor has declared many of the individuals unfit for work. 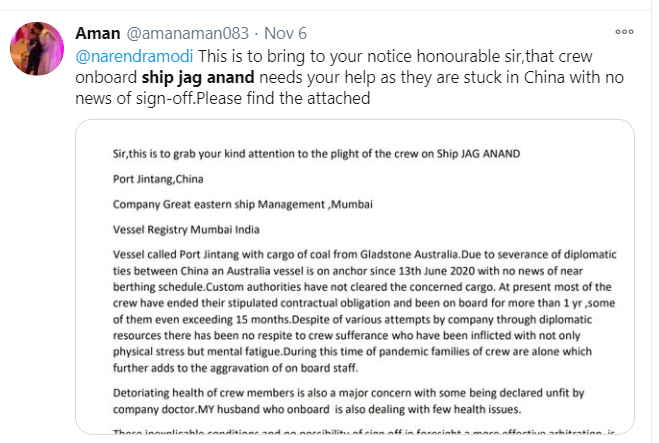 The shipping companies, Indian Embassy in China, and the Indian Government have all called on the Chinese officials to permit the ships to implement crew changes. Saying that those appeals have all failed, the NUSI is now urging everyone to send out the email it has written entitled “Floating Prison,” in which it says to the IMO, “We are not pleading, but are demanding urgent intervention from the IMO.”

For its part, a spokesperson from the Chinese foreign ministry responded to the AFP news outlet’s inquiry saying that China is not blocking the vessels from leaving the port area.