Carnival Corporation has completed a multi-million-dollar redesign and upgrade of Cruise Terminal 2 at Port Everglades in Fort Lauderdale.

The 141,000-ton Regal Princess will be the first ship to depart from the newly redesigned terminal. 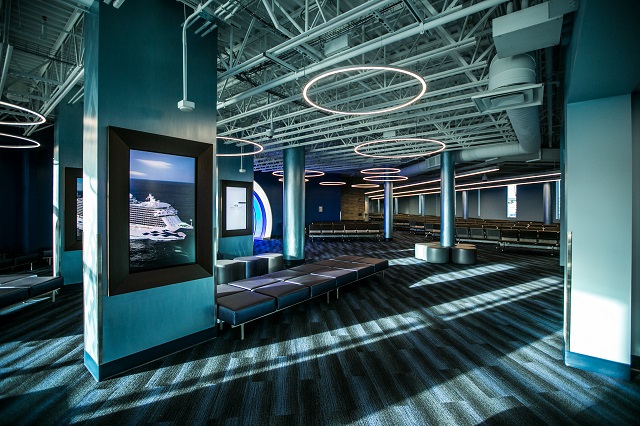 Additionally, in October, Port Everglades completed an extension to the slip at Cruise Terminal 4 so that larger cruise ships, as long as 1,100 feet, can now dock without extending into the Intracoastal Waterway. The $18 million Slip 2 construction project, adjacent to the recently renovated Cruise Terminal 4, lengthened the slip by 225 feet from the original 900 feet.

The total 1,125-foot slip length meets the needs of most of today's modern cruise ships such as Holland America Line's Pinnacle-class ships, which were introduced at Port Everglades during the 2017 cruise season with the U.S. debut of the ms Konningsdam or Princess Cruises' Royal-class ships, which also homeport at Port Everglades. New cruise ships introduced into the Port's fleet in 2017 also include Royal Caribbean’s Harmony of the Seas. Carnival Cruise Line is currently the primary user of the newly extended berth.

Each cruise ship call at Port Everglades generates an estimated $2.2 million in business revenue for the local community.

River and ocean cruise operator Viking announced Thursday that it is opening bookings for its 2023 Mississippi River season ahead of schedule. The firm just announced its debut Mississippi itinerary three months ago.  The company’s first vessel, Viking Mississippi, will debut in August 2022 on itineraries on Mississippi River between New Orleans and St. Paul. They will be Viking’s first river cruises in the U.S., and the company said that several sailings have already sold out. Given the strong demand,...

This week, the European Union's Healthy Gateways working group released interim advice for the resumption of cruise ship operations. The guidance is not binding and is subject to change as the pandemic progresses, but it is based on European Commission guidelines for the travel industry. The group's recommendations are comprehensive, covering everything from voyage planning and infection prevention through public health response measures. They include: - A gradual overall approach to restarting operations, with shorter voyages of 3-7 days...

Royal Caribbean Cruises, the parent company of the cruise lines, has nearly completed its efforts to repatriate crew members from its cruise ships. The lines had increased their focus on completing the trips home over the last two months as it became apparent that the cruise industry would continue its suspension of operations. In total, Royal Caribbean and its partner companies have 61 cruise ships with over 77,000 shipboard employees. Of those numbers, Royal Caribbean said I was worked to...