The vessels will import coal to Kyuden’s coal-fired power plants. The LNG procured for Kyuden’s thermal power plants will be supplied to the vessels as fuel at the loading facility of Kitakyushu Liquefied Natural Gas Co., a 75 percent owned subsidiary of Kyuden. 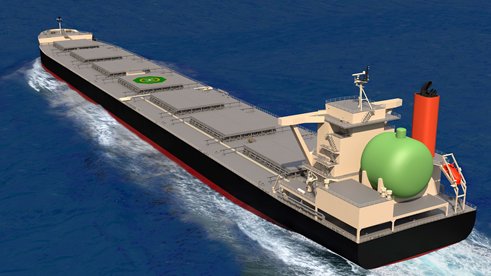 MOL's 235-meter, 950,000dwt vessel is being built by Namura Shipbuilding and is expected to enter service in June 2023. Earlier this month, MOL announced it has signed its first green loan, the proceeds of which will be used to partially finance the construction of the world's largest LNG bunkering vessel.

NYK's 235-meter, 950,000dwt vessel is being built by Oshima Shipbuilding and is expected to enter service in April 2023.

In October, NYK joined the Getting to Zero Coalition, a partnership among the Global Maritime Forum, the Friends of Ocean action and the World Economic Forum that builds on the Call to Action in Support of Decarbonization launched and signed by more than 70 leaders from across the maritime industry and financial institutions.

The Coalition is committed to getting commercially viable deep-sea zero-emission vessels powered by zero-emission fuels into operation by 2030 to realize the IMO’s ambition to reduce GHG emissions, thus accelerating maritime shipping's decarbonization.

In its medium-term management plan “Staying Ahead 2022 with Digitalization and Green” released in 2018, NYK announced the group’s intent to integrate environmental, social and governance initiatives into management strategy. NYK has positioned climate change as one of the company’s most important issues and is working to implement next-generation fuels such as LNG fuels to aid marine-fuel decarbonization.