LNG infrastructure company New Fortress Energy is moving ahead with an application to install a unique, multi-platform FLNG plant off the coast of Louisiana.

New Fortress is planning to install a "Fast LNG" development in West Delta Lease Block 38, located about 16 nm off Grand Isle. The two independent liquefaction trains at this deepwater "port" would export about 2.8 million tonnes per annum (mtpa) of LNG - about one-tenth the capacity of the Sabine Pass LNG plant operated by Cheniere. Though small, the development would offer a number of advantages, like low cost and speed to market - a critical factor at a time of high demand and geostrategic importance for LNG.

"With rapid deployment, this project can play a significant role in supporting our nation’s commitment to our European allies and their energy security as well as support our efforts to reduce emissions and energy poverty around the world,” said New Fortress chairman and CEO Wes Edens earlier this month.

The project requires a deepwater port license, and New Fortress has applied to the U.S. Coast Guard and the Maritime Administration for the needed permits. The company announced Tuesday that the two agencies have confirmed the completeness of the application and will move ahead with the environmental impact statement process. 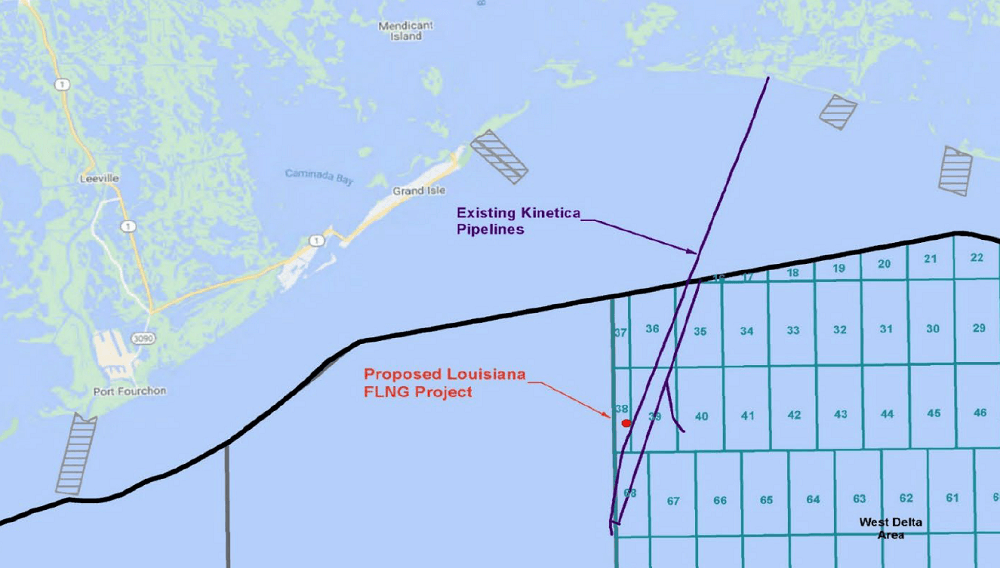 Unlike Prelude FLNG and other high-profile FLNG projects, New Fortress' systems are not exclusively floating. The company says that its design combines modular liquefaction systems with the technology of "jack up rigs or similar offshore infrastructure" to reduce cost. In its application, it suggests that Louisiana FLNG will incorporate four self-elevating platforms (jack-ups); three fixed platform structures; and one spread-moored floating storage unit, the LNG carrier Golar Penguin.

New Fortress has already partnered with Eni to bring its Fast LNG concept to the waters of Republic of the Congo. Its first installation there is expected to start production in the second quarter of 2023.