“See the World,” They Said

The plight of the sea turtles in the Gulf of Mexico drew broad attention during the recent cold weather in Texas. Volunteers turned out to help the animals which were stunned by the cold temperate. Thousands of turtles were found floating in the cold waters unable to move or washed up along the shore.

Volunteers helped to gather the turtles and transported them to makeshift rescue locations. But, as the weather warmed up, there was an equally large challenge to return the sea turtles to the Gulf of Mexico. Among the organizations that volunteered to assist was the Marine Spill Response Corporation (MSRC), fully funded by the oil and gas and shipping industries, it is the largest oil spill removal organization in the United States.

MSRC offered its oil spill response vessel and people to the rescue operation after learning about the need from International Bird Rescue, where MSRC’s CEO serves on the Board of Directors. NOAA and Texas Parks and Wildlife had requested assistance from the wildlife rescue community in finding a logistical solution to getting the turtles to warm waters.

MSRC’s vessel that carried out the operation, the Southern Responder, was perfectly suited for the rescue operation. The ship is configured as a platform supply vessel with plenty of back deck space and a ramp that opens off the back deck into the water where responders could gently slide the sea turtles back into the ocean.

The Southern Responder. which normally berths in Ingleside, Texas, arrived at the donated pier in Port Isabel at 10 p.m. on Friday, February 19, and the following morning 16 volunteers from MSRC began the 22-hour effort to load and release more than 2,200 green sea turtles from the 210-foot oil spill response vessel. 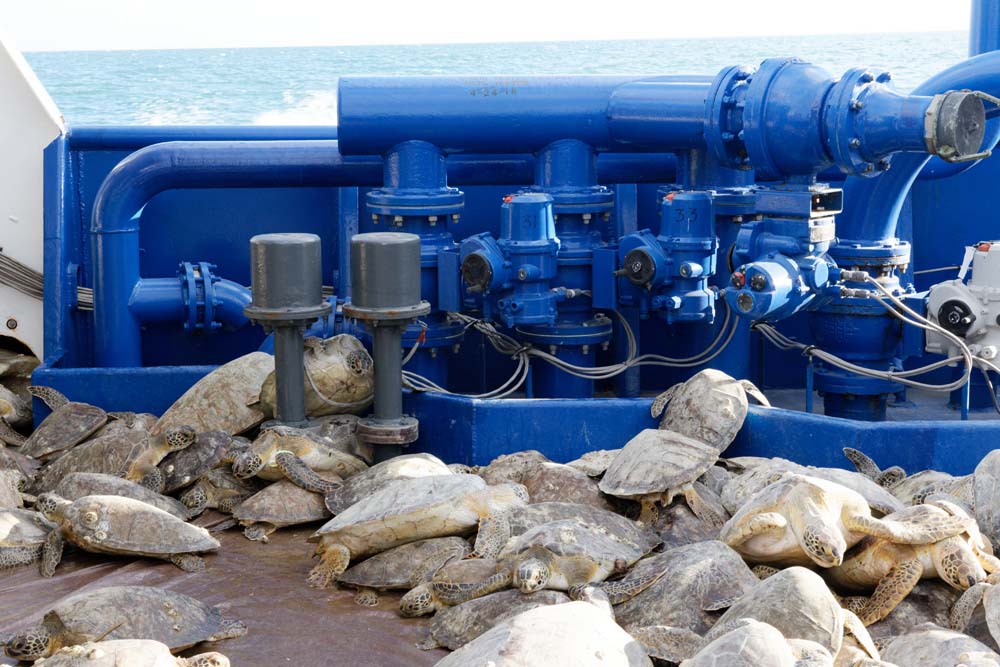 The sea turtles began to arrive at the Port Isabel Logistical Offshore Terminal pier at 9:30 a.m. in trailers and flat beds pulled by vehicles of rescue volunteers. MSRC’s crew and responders assisted Turtle Inc. with the volunteers with laying out tarps, kiddie pools, and blankets on every deck of the boat, and loading the turtles, one by one, down two ramps onto the back deck. The volunteers formed a human chain to position the turtles onboard and every square foot of deck space was used for the turtles that ranged from 25 to 400 pounds.

The Southern Responder got underway shortly after completing the loading at 3 p.m. After the vessel reached calm, 63-degree waters, 30 miles off the coast of South Padre Island, the release operation began. They continued to work until after sunset with the volunteers reporting that the turtles were lively and flapping as they slid down the ramp and into the water, paddling off in the current.

The success of the rescue operation led to a second request for MSRC’s assistance with another sea turtle release with Texas State Aquarium. MRSC and its volunteers repeated the operation sailing from Ingleside, Texas on February 23, 2021. 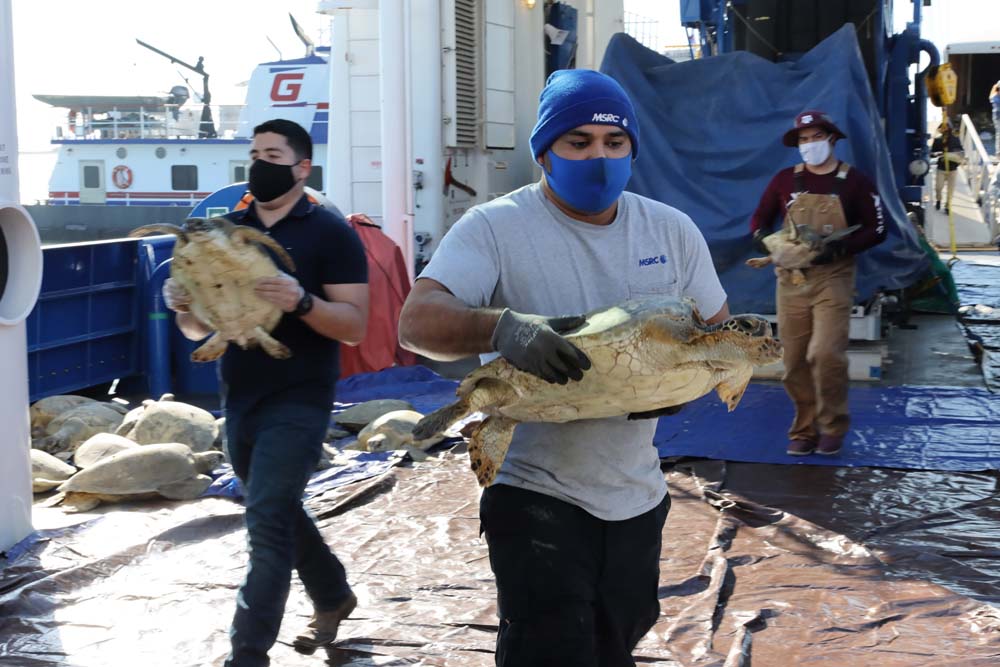 Arturo Sanchez, MSRC responder assists Turtle, Inc. volunteers with loading green sea turtles one by one onto the back deck of the Southern Responder 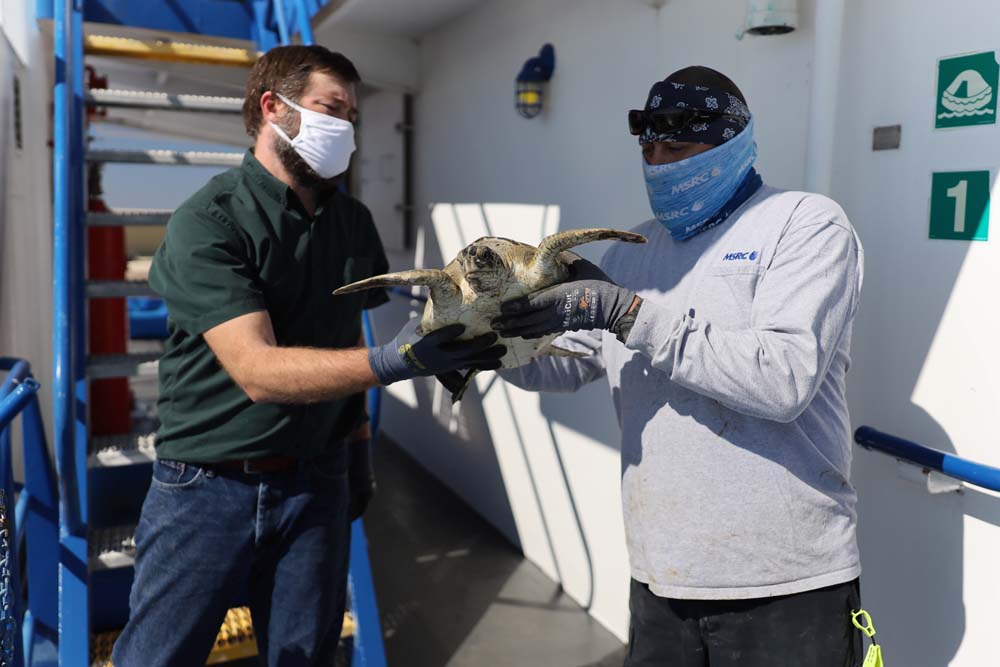 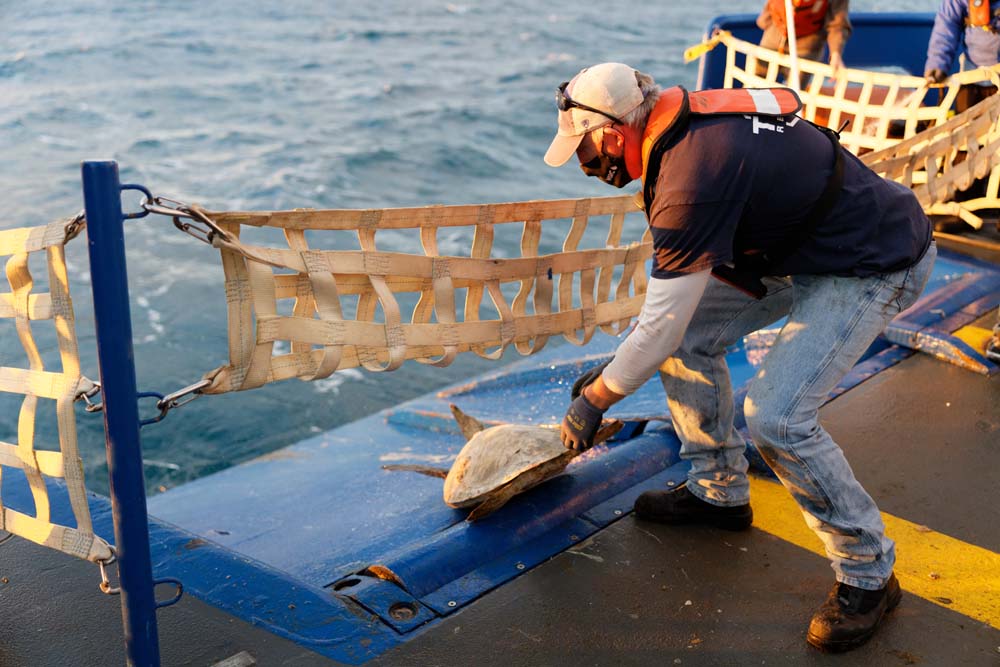 Chinese fishermen have recovered a drone boat off the eastern coast of the Chinese mainland, and officials suspect that it is a "reconnaissance device secretly placed by a foreign country," according to state-owned outlet CCTV.  The fishing boat skipper who found the device, Wang Suo, told state media that his net seemed extra heavy when he began to haul it in. He sped up the process, thinking that he had caught a lot of fish. Instead, he pulled up a black...

Harland & Wolff, the storied shipbuilder, is continuing to make progress on the relaunch of its business refocused from the historic shipbuilding to take advantage of the emerging offshore wind industry. Its parent company InfraStrata announced the company has received its first contract to build components for a new wind farm being developed in the outer Firth of Forth in Scotland. The contract valued at approximately $36 million is with Saipem, an Italian offshore engineering company, for the fabrication and...

“See the World,” They Said

I grew up with stories of my Uncle Bernhard’s trips to Japan as a merchant mariner. There was that odd black-and-red lacquer side table he brought back sometime in the 1920s. That was another time – when putting in at a foreign port meant days of rest or adventure while cargo changed hands. Since containerization, time in port is down precipitously. A 2018 paper in the International Journal of Shipping and Transport Logistics by a four-author team determined that the...