Emanuel Exports, the company implicated in whistleblower footage of 2,400 sheep dying of heat stress, is now part of a criminal investigation being undertaken by Australia's Department of Agriculture. 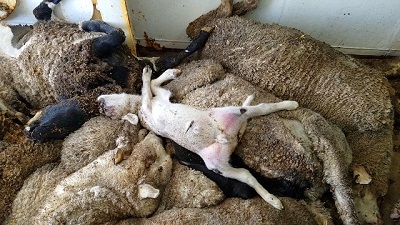 The footage was aired on 60 Minutes in April, and throughout the program footage from five separate voyages was aired depicting thousands of sheep suffering severe heat stress; sheep caked in melted feces and urine; injured and sick animals left to die slowly; decomposed bodies left in pens with living sheep and pregnant ewes giving birth and their lambs dying.

Federal Agriculture Minister David Littleproud has announced harsher penalties for exporters who did not protect the welfare of animals, and local media reports that the government gave the company notice of the investigation several weeks ago, saying in a statement: "This includes investigating allegations of overstocking of the vessel, failing to have sufficient food and water available, injury and illness not being treated and accredited veterinarians and stockmen leaving the vessel prior to completion of unloading. A range of witnesses are being questioned and information is being examined by the department.”

The probe will look at whether there have been breaches of the Meat and Livestock Industry Act, the Export Control Act or the Criminal Code Act.

Emanual Exports is based in Perth, and West Australian Premier Mark McGowan welcomed the investigation, saying: "It should have occurred before.”

A Private Member’s Bill to end the long-haul live export of sheep was tabled last month by Liberal Government representatives including Sussan Ley, Sarah Henderson and Jason Wood. However, the government has so far stopped it being debated. The opposition Labor Party has indicated that it supports a ban on the trade.

The live export debate has now expanded to the live cattle trade. Questions have been raised about the welfare of cattle after Israel Against Live Shipments released footage of Australian cattle caked in excrement. The shipment was exported Western Australian-based company Livestock Shipping Services. Israel Against Live Shipments highlighted that the animals arrived during an intense heat wave. “It is despicable for both Israeli and Australian Governments to allow such a trade to operate despite all the evidence of animal suffering,” said a spokesperson for the group.

The Australian government has denied mistreated saying the cattle were washed down every two days during the voyage.

WARNING: SOME VIEWERS MAY FIND THIS FOOTAGE DISTURBING