A second 60 Minutes program has aired in Australia: this time showing Animals Australia footage of sheep being beaten, dragged and thrown outside an abattoir in Qatar.

The first 60 Minutes program, a week prior, showed footage of voyages where thousands of sheep died of heat stress on their way to the Middle East. Although the events shown on both programs happened outside Australia, they have prompted criticism and public demonstrations around the nation with animal welfare proponents calling for a ban on the trade. 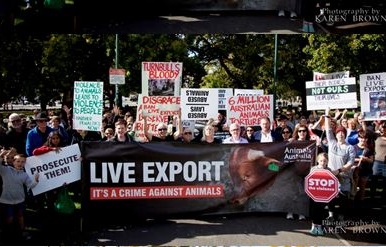 Australia has already done something no other live export nation has by enacting regulations that require exporters to be responsible for animal welfare during the journey overseas and up to the point of slaughter. Critics of the Exporter Supply Chain Assurance System (ESCAS) call the regulations a welfare farce, some supporters say that the controversy that followed the initial 60 Minutes program subject them to a kangaroo court - a process where key facts are skipped over in order to arrive at a pre-determined judgment: that ESCAS will never work well enough and live exports should be banned. Rather, they say, ESCAS has led to improved welfare and could be used to boost animal welfare globally. A ban would be a disincentive for other nations to consider similar welfare programs.

ESCAS calls for animal handling and slaughter to meet World Organisation for Animal Health (OIE) standards. Australia and Qatar, along with 179 other nations, are members of the OIE.

•  Restraining methods which work through electro-immobilization or immobilization by injury such as breaking legs, leg tendon cutting, and severing the spinal cord (e.g. using a puntilla or dagger)
•  The use of the electrical stunning method with a single application leg to leg
•  The slaughter method of brain stem severance by piercing through the eye socket or skull bone without prior stunning.

The Case of Brazil

The live export industry globally is coming under increasing scrutiny after Animals International exposed the brutal treatment of animals exported live from Brazil last year. In Brazil, cattle are stunned unconscious before slaughter. This is not the case in Lebanon where attempts to restrain fearful animals were shown to include eye gouging and tail twisting. In Egypt, Brazilian bulls were stabbed in the face and slashed in their leg tendons in attempts to bring them to the ground to have their throats cut.

Even before the Qatar footage was aired publicly, Australia's Department of Agriculture placed a ban on exports to the abattoir. The Department says that this was the first complaint it has received about sheep exports to Qatar since the rollout of ESCAS. However, since March 1, 2018, Animals Australia has provided reports about non-compliant handling of animals in three markets and allegations of sheep outside their approved supply chains in five markets in the Middle East. The Department's ESCAS investigation records indicate 25 complaints in 2014, 45 in 2015, 34 in 2016 and 16 in 2017.

After the first 60 Minutes program, the Australian Livestock Exporters' Council proposed a range of steps to strengthen transparency and reporting, and Australian Minister for Agriculture David Littleproud set up a whistleblower hotline for the live export industry. "There should be nothing to fear from transparency. Let's let the light shine in," he said. The second 60 Minutes program was aired two days later.

Animals Australia cites Emanuel Exports, alleging that since 2005 the directors of Emanuel Exports and their sister companies have been involved in 37 separate voyages on which over 1,000 animals perished on each shipment. In addition, since 2013, 42 government investigations have found these exporters guilty of non-compliance with regulations in importing countries, resulting in cruelty to thousands of Australian animals.

A vessel awaiting another Emanuel Exports shipment, the Panama-flagged Awassi Express, currently sits in port in Fremantle waiting to ship over 50,000 sheep to the Middle East. One of the scheduled destination ports for the vessel is Qatar. “The Australian public is still reeling from the egregious suffering they witnessed occurring at sea under Emanuel Exports’ control,” says White. “To reward them with another export permit, rather than take strong regulatory action is exactly why there is such contempt for the regulator and the law.”

February 2006 Suspension of live exports to Egypt
The 60 Minutes program broadcasts footage of the mistreatment of Australian cattle in the Bassateen abattoir in Cairo, Egypt. The government announces a ban on live cattle exports to Egypt whilst the claims are investigated. Exports resume in 2008 following the signing of MOUs which require cattle to be handled and slaughtered in accordance with OIE standards.

December 2010 ABC broadcasts footage of cruelty in Kuwait
The 7:30 Report program broadcasts footage appearing to show Australian sheep in Kuwait being handled and slaughtered brutally during preparations for the three-day festival of sacrifice. Meat and Livestock Australia argue that animal welfare education programs are needed in Kuwait, pointing to improvements flowing from such programs in Bahrain and Qatar.

July 2011 Resumption of trade to Indonesia and introduction of ESCAS
The Government lifts the ban on live cattle exports to Indonesia on July 6 and introduces new export permit requirements for Indonesia under ESCAS.

August 2011 Release of footage from Turkey and Israel
Animals Australia releases footage from Turkish abattoirs depicting slaughtering practices which appear to violate international standards. Footage shot by Israeli group Anonymous for Animal Rights is also released, depicting Australian cattle being hit with spike-tipped poles whilst being unloaded from a truck in Israel.

October 31, 2011 Private Member’s Bill on mandatory stunning
Independent MP Andrew Wilkie introduces a bill which proposes to mandate that all exported livestock be stunned prior to slaughter. The bill is not debated and is reintroduced, unsuccessfully, in 2012.

March 1, 2012 ESCAS applies to first tranche of export markets
ESCAS is implemented for live animal exports to Kuwait, Bahrain, Qatar and Turkey, in addition to existing arrangements in Indonesia and Egypt.

September 1, 2012 Second tranche of ESCAS is rolled out
ESCAS is extended to apply to Israel, Japan, Jordan, Malaysia, Oman, Philippines, Saudi Arabia, Singapore and the UAE.

September 6, 2012 Supply chain breaches in Kuwait
Following the release of footage of 200 Australian sheep being sold in an unaccredited Kuwait City meat market, a government investigation finds evidence of non-compliance with ESCAS requirements. A further investigation is undertaken after a similar complaint is made in January 2013, with the Department of Agriculture finding that ESCAS is unlikely to detect small numbers of sheep leaking from approved supply chains.

December 2012 Footage of cruelty in Israeli abattoir
The 7:30 Report program broadcasts footage of cattle being beaten and poked in the eyes and genitals with stunguns at the Bakar Tnuva abattoir in Israel. The abattoir had passed an audit commissioned by Australian company Elders in July 2012, raising concerns about the auditing process.

May 2013 Suspension of trade to Egypt
The industry suspends trade with Egypt following the release of footage by Animals Australia of systemic and routine abuse of cattle at the two Egyptian abattoirs accredited under the ESCAS.

October 2013 Supply chain breaches in Jordan
The Department of Agriculture investigates allegations of supply chain leakage in Jordan, finding that 2,718 sheep were moved outside the approved Jordan supply chain.

November to December 2013 Allegations of cruelty in Mauritius and Gaza
Footage of Australian bulls being abused prior to slaughter in Mauritius, and of brutal methods of cattle slaughter in Gaza, prompt Departmental investigations. The Department of Agriculture stops issuing export permits to Gaza and subsequently suspends use of the Gaza municipal abattoir for Australian animals.

October 22, 2014 Footage of slaughter outside supply chain
The ABC broadcasts footage of Australian sheep and cattle being slaughtered outside the approved abattoirs in Kuwait, Gaza and Jordan.

June 2016 Footage of cruelty in Vietnam
The ABC airs footage obtained by Animals Australia showing cattle being beaten with sledgehammers in Vietnamese abattoirs. Animals Australia investigators report that large numbers of Australian cattle have been leaving approved supply chains. The industry suspends exports to three abattoirs, and announces additional measures including a three-month independent inquiry into the systems and standards in place to support ESCAS requirements in Vietnam. As part of its ongoing investigation, the Department suspends 21 facilities in Vietnam and directs two exporters to cease supply to the Vietnam market until effective measures are in place to address animal control, traceability and verification processes.