The former ro-ro acquired four years ago by Jeff Bezos’s space company Blue Origin left the Port of Pensacola yesterday for her final voyage. Instead of the grand vision of converting the former Stena vessel into an autonomous Landing Platform Vessel, she however left the port on the end of a towline bound for the scrapyards in Brownsville, Texas.

The 10,000 dwt ro/ro cargo ship named Stena Freighter was sold to Bezos in August 2018. The Port of Pensacola reports that they were approached about the vessel docking at the port three years ago for up to about one year. The plan called for the vessel to undergo maintenance and repairs in the port as well as the first stage of the modification process. Blue Origin had planned to move the vessel to another location to complete the work.

Observers point out that other than a high-profile christening ceremony, little visible work proceeded on the vessel. She was renamed while at the port as the Jacklyn in December 2020 in honor of Bezos’ mother. Externally the stern ramp was removed from the vessel and some other changes took place while the port says that teams of over 100 people at times worked aboard the vessel. The Port of Pensacola says extensive progress was made on the conversion. 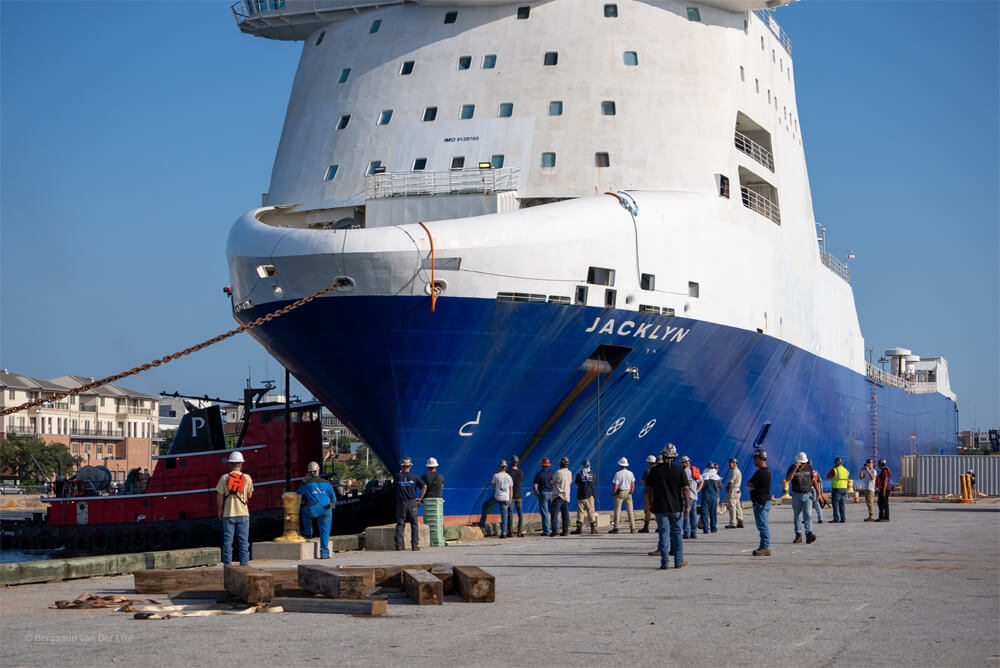 Jacklyn preparing for her final departure (Port of Pensacola photos)

Blue Origin planned to convert the ship with the addition of a giant platform to land its orbital rocket New Glenn on its return to earth after launch. The vessel was to have been autonomous and able to operate in seas up to 20 feet for the recovery and return mission of the first-stage rockets. The platform was never added and by earlier this year, Blue Origin confirmed that plans for the vessel had been abandoned without providing a reason.

The vessel, which is 600 feet long, had started construction in 1997, but due to problems with the shipyard did not enter service until 2004. Stena had originally chartered the vessel to operate for the British Ministry of Defense but that fell through during the construction delays. The Scandinavian ferry company operated the vessel for 14 years on a variety of routes mostly on the North Sea or Baltic before the sale to Blue Origin.

The company had said it was considering other uses for the vessel, but officials at the Port of Pensacola are saying the conversion had progressed to the point of making it not practical for the ship to resume a more traditional operation.

The end came yesterday, August 14, as a single tug was secured to the vessel. Along with the port’s local tugs, they hauled her away from the dock and guided her out the channel to the Gulf of Mexico. The tug has begun the final voyage expected to end at one of the Brownsville scrapyards in the coming days.