Plans for Blue Origin, the space company founded by Jeff Bezos, to use a retired Stena ro/ro cargo ship as their landing pad have apparently been scrapped as too costly to implement. As first reported by CNN Business, the company has decided to abandon the use of the vessel which Jeff Bezos had renamed Jacklyn in honor of his mother.

“Blue Origin could still use the ship for another purpose or abandon the project altogether,” the report says citing Linda Mills a spokesperson for the rocket company. She told CNN that the company is "still assessing options." 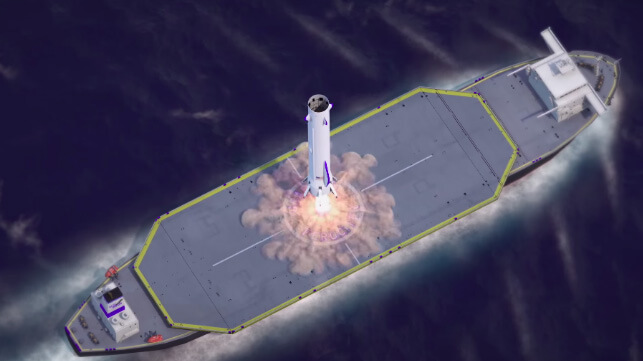 Concept for the use of Jacklyn as landing platform (Blue Origin)

Bezos’ company confirmed in the fall of 2018 that it had purchased the 10,000 dwt ro/ro cargo ship named Stena Freighter. The vessel which is 600 feet long had started construction in 1997 but due to problems with the shipyard did not enter service until 2004. Stena had chartered the vessel to operate for the British Ministry of Defense but that fell through during the construction delays. The Scandinavian ferry company operated the vessel for 14 years on a variety of routes mostly on the North Sea or Baltic before announcing the sale in August 2018.

Blue Origin planned to convert the ship with the addition of a giant platform to land its orbital rocket New Glenn on its return to earth after launch. Like SpaceX, the concept is to reuse the first-stage rockets to lower the cost of space operations. SpaceX has successfully used smaller drone barges to land its rockets while Blue Origin detailed plans to send the large ro/ro into the Atlantic to perform a similar mission.

The scaffolding and tarping that was on the back of the ship where the ramp used to be is gone. A solid stern is now in place@DanaEn803 @FelixSchlang @BlueOriginFleet pic.twitter.com/yD1v45s1dX

Jeff Bezos announced that he had surprised his mother by renaming the ship in her honor in December 2020. The Jacklyn has been seen in Pensacola, Florida with some conversion work underway. A 2021 picture showed that the stern had been converted from the ro/ro ramp to a solid steel piece. It is unclear how far the renovations had progressed and the current status of the vessel.

CNN reports that Blue Origin has decided to pursue other, more “cost-effective,” alternatives for its rocket recovery system.

Years behind schedule, Blue Origin has said that it now plans to launch its first orbital rocket by the end of 2022. They have already received contracts to transport satellites and cargo into space, despite so far only having run a limited number of suborbital tourist flights.