The installation of a prototype of Michelin’s inflatable wing sail for commercial ships recently commenced. Before the end of the vessel, ro-ro MN Pelican is expected to start deploying the sail during its trips between the UK and Spain.

Known as the WISAMO (Wing Sail and Mobility) project the concept features an inflatable, retractable, automated wing sail that can be fixed on commercial vessels or pleasure boats. According to the company, the inflatable wing sail has a revolutionary design, using Michelin’s expertise in advanced materials and inflatable structures, and will help reduce fuel consumption for the ships. The sail is automated with a system developed by Michelin R&D and is retractable for access into ports and under bridges.

“As planned, Michelin, Start2Prod, and IMECA, together with Compagnie Maritime Nantaise – MN, owners of the Pelican, Michelin Aria, and Michelin Recherches et Technologies (MRT Switzerland) teams are fully involved in the installation of WISAMO wing sail on a first commercial vessel. This new step is a great multicultural experience and moments of diverse competencies sharings to contribute to an important cause toward maritime transport decarbonization,” Michelin wrote in a social media posting. 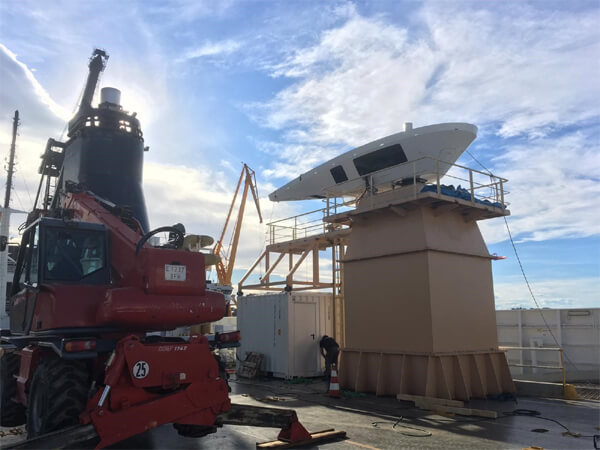 Base for the sail installed on the MN Pelican (WISAMO)

Michelin is pursuing the innovative project as part of the group’s efforts to move beyond tires as part of the group’s “all-sustainable” vision. WISAMO was first introduced to the public in 2021 as part of the company’s future vision presentation at the Movin’On Summit. Management highlighted the global biodiversity concerns, saying that the group is also displaying ambitions beyond tires, exploring new fields that may benefit from its expertise in high-tech materials to open the way to innovations that are themselves also favorable to biodiversity. WISAMO is the first example of this as part of IMECA, a subsidiary of the group focusing on opportunities beyond tires. IMECA launched Start2Prod an industrial company to develop prototypes for these future innovations.

The concept for the wing sail came from two Swiss inventors sharing their vision with Michelin’s Research & Development department. The WISAMO group says the wing sail system offers a wide range of use, including “close-hauled” (headwind), providing one of the widest operating ranges in the market. They report that the wing sail system can be used on all maritime routes with the potential to reduce a ship’s fuel consumption and hence its emissions by 20 percent or more. Simulations have demonstrated CO? reductions of up to 35 percent on one section of the transatlantic route. 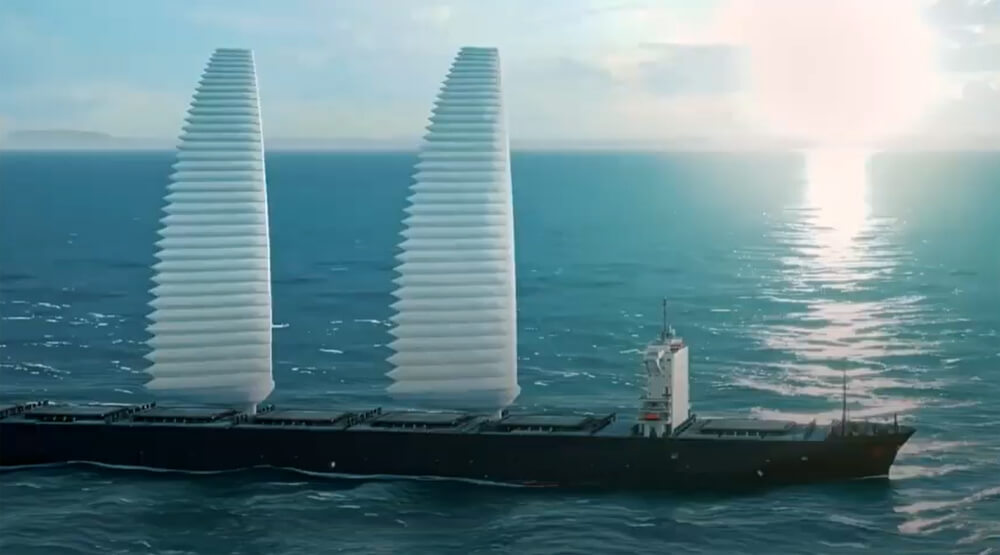 “With Wisamo, which uses wind power, we are counting on becoming a topflight player in the decarbonization of shipping, reducing the CO2 emissions that are harmful to biodiversity because of their acidification effect on the oceans,” stated Fabien Monin, Business Developer - Michelin WISAMO, in announcing the concept.

Previous tests of a 100 sq meter prototype were carried out on a sailboat and now the first installation is taking place in Span aboard the 507-foot long ro-ro cargo ship. Built in 1999, the Pelican operates under charter to Brittany Ferries. The 8,600 dwt vessel makes twice weekly trips between Poole, Great Britain and Bilbao, Spain, which Michelin notes will be a good testing opportunity with the vessel crossing the Bay of Biscay with winter weather conditions.

The sail was designed and developed by the WISAMO project team. They believe it is particularly suited to ro-ro vessels, bulk carriers, gas carriers, and tankers, and may be installed during the ship’s design phase, as part of the original equipment, or maybe fit retrospectively on an existing, already operational ship.

Michelin’s entry into the field comes as other companies are also testing elements of wind propulsion. The International Windship Association reports that 21 large commercial ships are now fitted with some form of wind propulsion, with the group projecting it will reach 25 by year’s end.  Japan’s Mitsui O.S.K. Lines recently completed the maiden voyage of a large bulker outfitted with its design for a rigid sail and the company plans to introduce additional bulkers using the sail or with a combination of sails and wind rotors.