Sharing its vision for sustainable mobility for the future at the 2021 Movin’On global sustainable mobility summit, France’s Michelin Group, best known for its innovations in tires, unveiled its concepts for an inflatable wing sail that will provide wind propulsion both for commercial shipping and the pleasure craft industry. The company expects the first ships to be fitted with the sail concept in 2022.

Known as WISAMO, the Wing Sail Mobility project, seeks to build on the growing interest in wind and wind-assisted propulsion to help decarbonize the maritime industry. WISAMO is an automated, telescopic, inflatable wing sail system. Michelin says the first installation will be on a merchant ship in 2022 when Michelin expects the sail to go into production following the completion of a trial phase.

The inflatable wing sail harnesses the wind as a source of propulsion. According to the designers, its revolutionary design enables a ship to reduce its fuel consumption and thereby have a positive impact on the environment by lowering CO2 emissions. Depending on the type of vessel, route, and weather conditions, Michelin says the system can improve a ship’s fuel efficiency by up to 20 percent.

Designed and developed by the WISAMO project team, the system is installable on most merchant ships and pleasure craft. They said that it is especially suitable for ro-ro ships, bulk carriers, and oil and gas tankers. The concept has been developed so that it can be fitted as original equipment on newbuilds or retrofitted on in-service vessels. 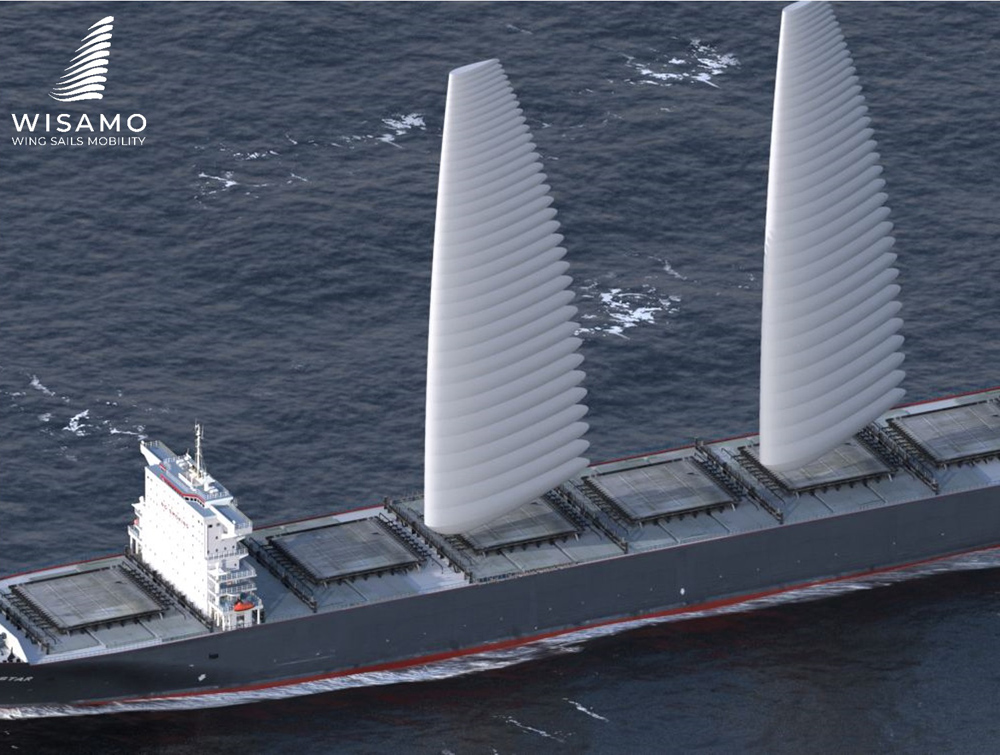 The wing’s range of use is one of the market’s broadest, according to Michelin, with proven effectiveness on many points of sail, and especially when close-hauled (windward). It can be used on every maritime shipping route. The telescopic mast is retractable, making it easy for a ship to enter harbors and pass under bridges.

The system is the product of a collaborative venture between Michelin Research & Development and two Swiss inventors. Michel Desjoyeaux, a world-renowned skipper and ambassador of the project, is also collaborating on the project. Desjoyeaux said during the introduction of the system, “the advantage of wind propulsion is that wind energy is clean, free, universal and totally non-controversial. It offers a very promising avenue to improving the environmental impact of merchant ships.” The design team highlighted that Desjoyeaux's input and technical knowledge as a seasoned sailor will enable WISAMO to be tested in actual maritime shipping conditions.

“The WISAMO project is Michelin’s contribution to enabling greener, softer maritime mobility in advance of future regulations,” the company said. In February 2021, Michelin also announced that it was joining a growing number of global brands committing to use a sail-powered carbon-free shipping alternative for its products. Michelin signed a letter of commitment for maritime transport of containers of its pneumatic tires aboard NEOLINE, the French start-up that plans to build two cargo ships that will use sails for their main propulsion.