The Shofu Maru, a 100,400 dwt bulker made its maiden arrival in Newcastle, Australia on October 24 drawing a lot of local attention at the novel sight of a 770-foot long bulker with a unique rigid sail fitted at the front of its deck. The vessel completed its first trip from Japan after commissioning by Mitsui O.S.K. Lines (MOL) and operating under a long-term charter to Tohoku Electric Power to load Australian coal.

Port Authority of New South Wales CEO, Captain Philip Holliday called the arrival a historic moment where maritime history and new technologies for the future meet - all part of a new generation of green shipping around the globe. “NSW is delighted to be welcoming this beautiful and innovative vessel to our shores, along with a delegation from the Mitsui O.S.K. Lines (MOL) Group who developed the ‘next generation’ of wind-powered vessel,” said Captain Holliday.

Spectators turned out to see the unique vessel welcomed by fireboats as it proceeded to the pier. It was also broadcast live on the port’s video feed followed by a welcoming ceremony by the port and officials of MOL, The Japanese shipping line working with Oshima Shipbuilding Co. has been leading the development of the technology that first began in 2009 as part of a university research project. 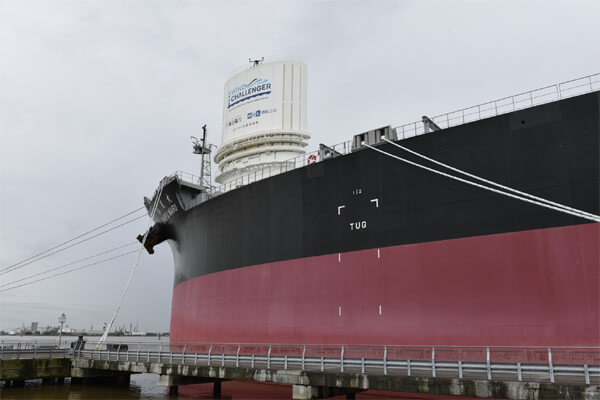 The bulker is the first vessel in the world fitted with the rigid sail. While at sea it can be extended to a maximum height of 180 feet and it is approximately 50 feet across. An onboard computer system adjusts the height and angle of the sail to the orientation of the wind and to maximize the wind energy assistance provided to the vessel. MOL expects approximately a five percent energy reduction on voyages between Japan and Australia. On the Pacific where the vessel will experience strong winds during crossings to North America, they expect the savings will increase by up to eight percent.

The Harbor Master for the Port of Newcastle reported that they sent Captain Vikas Bangia along with two Newcastle Marine Pilots to Japan to learn how the sail might impact the navigation of the vessel. They undertook simulation piloting trials at the MOL Group facility in Tokyo. They reported when the sail is lowered it has little to no impact on the navigation of the vessel. 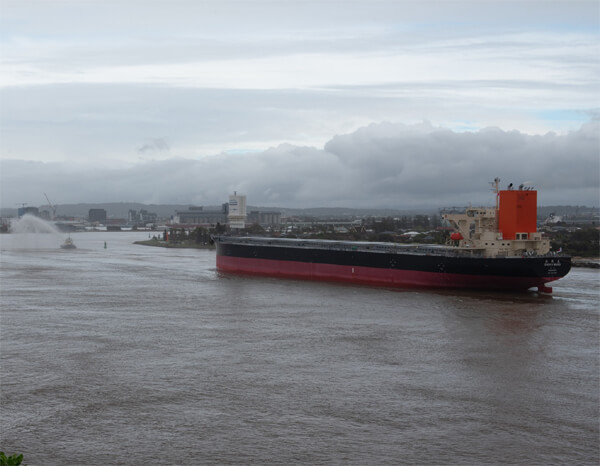 Before the first voyage, MOL and Oshima Shipbuilding conducted trials of the vessel in Japanese waters. Executives from MOL said it was an exciting day to see the concept finally in operation after many years of preparation and design. The line expects to build additional vessels equipped with the technology as they pursue zero carbon operations for their fleet.

Australian officials welcomed the unique ship. During the arrival ceremony, the company said that it has approximately 1,500 vessel arrivals in Australia each year to load cargo. The bulker was expected to spend approximately 20 hours loading coal before starting its return trip to Japan.