A digitized film database of the polar ship the Nella Dan was released on Saturday and is now available for viewing online.

The database of over 75 films is hosted by Friends of Nella Dan, a group designed to bring old friends together and share their stories with the world. The Lauritzen Foundation, Springeren and Knud E. Hansen supported the development of the database which has over 20 hours of film footage from voyages in the Arctic and Antarctica between 1961 and 1987.

Nella Dan, built by Aalborg Shipyard, was launched in 1961 and sank on Christmas Eve in 1987. The last polar ship in J. Lauritzen's proud fleet of red polar sisters, she sank in deep water off the Coast of Macquarie Island in the Southern Antarctic Ocean.

For over 25 years, Nella Dan served as a supply, expedition and research ship for the Danish interests in the northeast Greenland, as well as for French and Australian interests in the Antarctica.

Nella Dan and her polar sisters represent a piece of unique Danish maritime history that stretches far beyond the wild stories of young men, says Chairman of Friends of Nella Dan, Rasmus Nygaard. “It is all about geopolitical interests, expeditions and the occupation of the unknown. The Red polar ships made it possible to establish environmental research, marine biological surveys, registration of the population of marine mammals, observations of whaling and much more in the Antarctic.”

Nella Dan achieved legendary status among polar ships. Her track record of 85 trips and half a million nautical miles in Antarctica – or 24 times around the Earth – made her, among other things, the ship in Australian service with the most miles and the longest period beset in the ice.

She sank off Macquarie Island after dragging her anchor in heavy weather and hitting rocks close to the research station she was supplying in Buckles Bay. Damage to the vessel was immediate and serious with the hull holed in two places and water flooding the engine room. However, there were no casualties. Although plans were initially made to salvage the vessel, the decision was eventually made to scuttle her in deep water off Macquarie Island.

The response from around the world was overwhelming. Crew and expeditioners who had sailed in the ship composed poetry, songs and eulogies in her honor. A former expeditioner mourned:

A tired old ship disappeared under the sea, but it is only the empty shell and not the soul of Nella Dan. Nobody can destroy the memory and love of hundreds of expeditioners who sailed in the little red ship during her 26 years… Nella Dan rests now at the bottom of the sea, but will live forever in the hearts of thousands of friends. – From ‘Farewell Nella Dan’, Aurora, March 1988.

With construction underway of what has been dubbed the Nella Dan II, the footage is a bridge to the future for the designer Danish naval architects Knud E. Hansen. In 2020, the Australian Government will be replacing the Aurora Australis with a new icebreaking polar vessel. She has the working title Nella Dan II and is being designed by Knud E. Hansen.

CEO Finn Wollesen sailed on the original Nella Dan in the 1980s and is vice-chairman of Friends of Nella Dan. He says that guests will be able to have a virtual reality walk on the new vessel using the company’s design tool ShipSpace, a virtual reality design system that allows engineers, designers and owners to walk on board their new vessels from early design all the way through construction.

“So, beside telling the old stories and showing the old films, we also bring a link between Nella Dan, the new vessel and new technology like ShipSpace,” he says.

The new heavy icebreaker is designed to resupply Australia’s Antarctic bases and for research and scientific work. The vessel will be able to deploy a wide range of vehicles, including helicopters, landing barges and amphibious trucks to support the resupply operations. The new ship provides a modern platform for marine science research in both sea ice and open water with a large moon pool for launching and retrieving sampling equipment and remotely operated vehicles.

Unique to the vessel is a hybrid propulsion system to provide both the high power needed for icebreaking and silent running for science operations. Sensitive acoustic instruments are mounted on dual drop keels and multi-beam bathymetric sonars will enable sea floor mapping. Flexible and modular science laboratories will provide scientists the diverse facilities needed for conducting cutting edge research.

The Friends of Nella Dan are now looking for partners for the making of a documentary based on the film material gathered in the database.

The film database is available here. 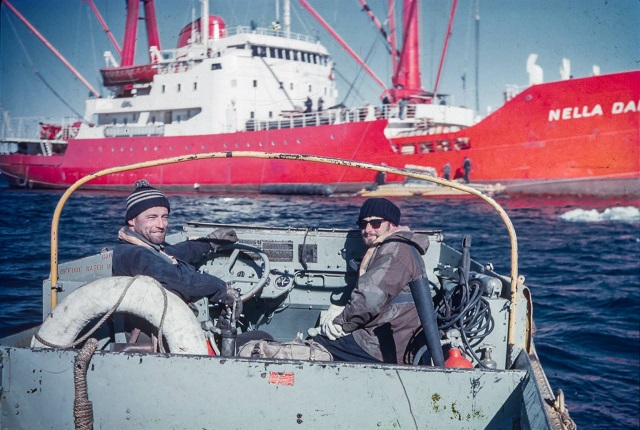 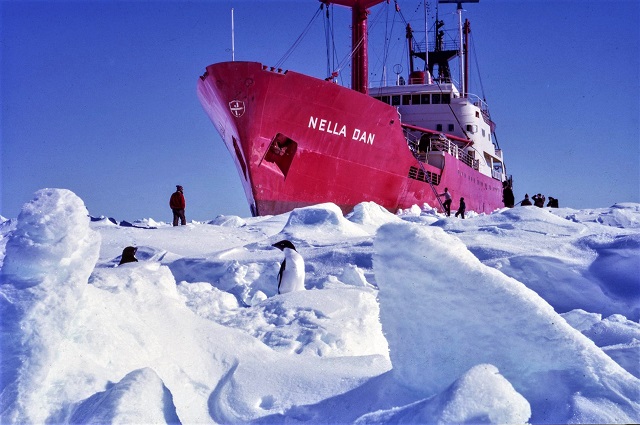 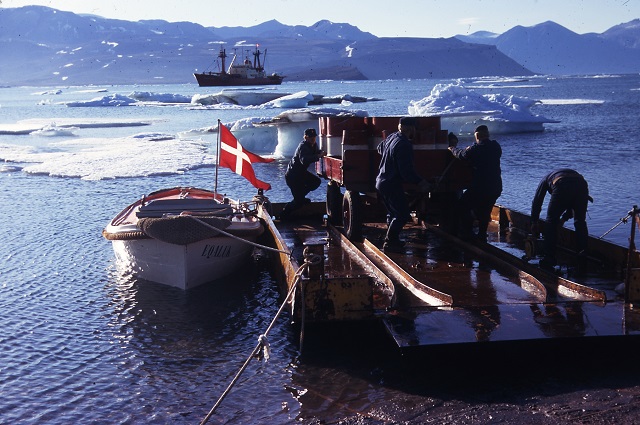 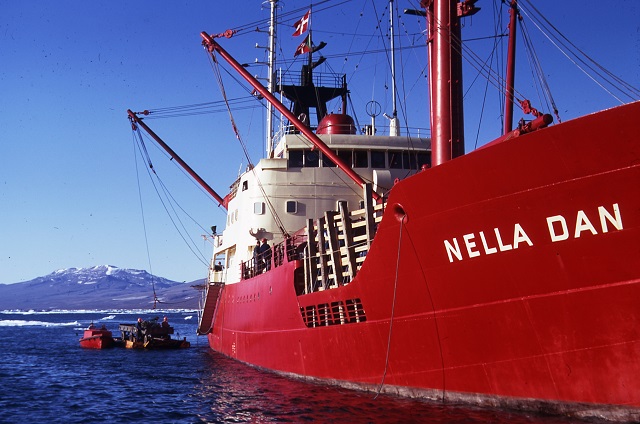 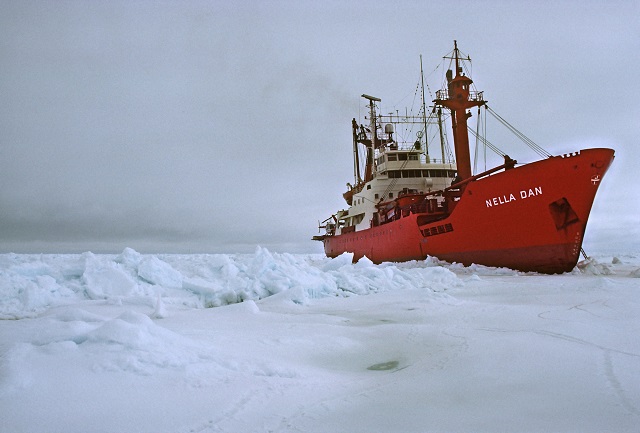 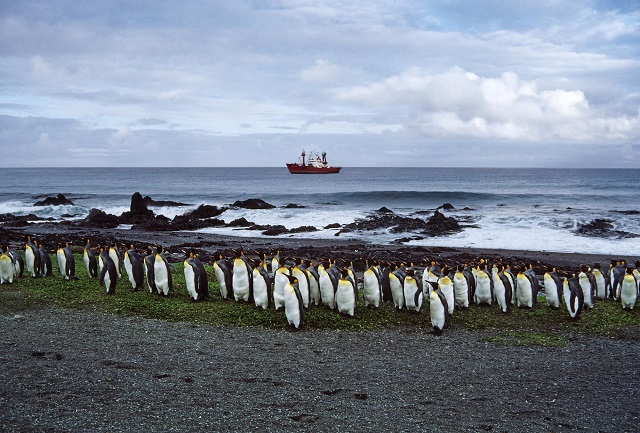 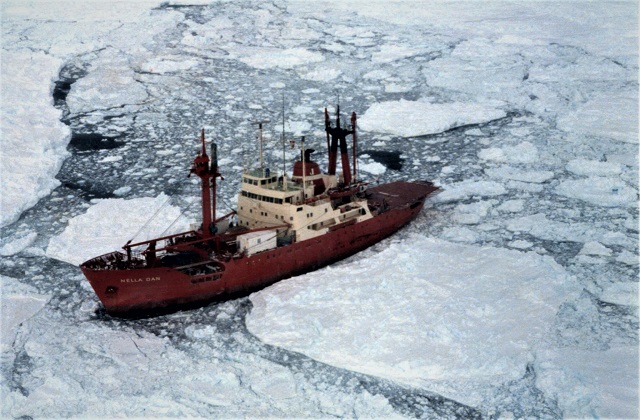 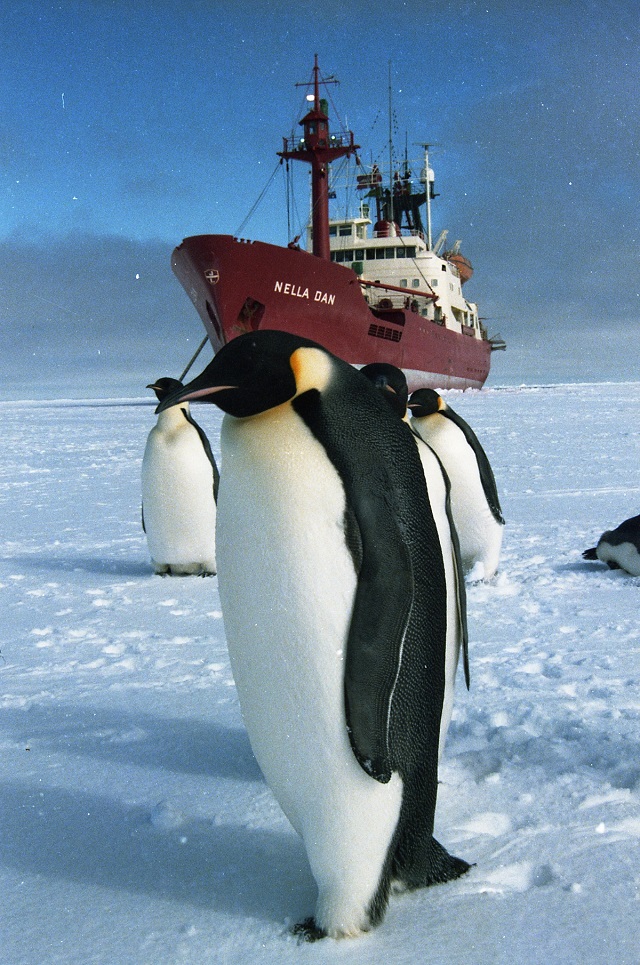