The Kiel-based shipyard German Naval Yards (GNYK) will take legal action against the procurement decision of the Federal Ministry of Defence to grant the German frigate (MKS 180) project to the Dutch-led Damen consortium.

"After a thorough examination, we have decided to file a complaint against the award decision," said a spokesman of the shipyard. He added: "We have serious doubts about the legality of the decision and will therefore exhaust all legal possibilities at our disposal."

GNYK is thus exercising its right under public procurement law to have the decision reviewed.

The government of Germany announced last week that it has selected a bid from Dutch shipbuilder Damen and Hamburg-based Blohm + Voss (a subsidiary of Lürssen Group).

The $6.7 billion, four-hull contract is the largest in recent German naval shipbuilding history, and the award includes options for two additional hulls - plus the possibility of future export sales. The first ship is slated for delivery in 2027.

Damen is the prime contractor but says about 80 percent of the investment created by the construction will be spent in Germany. Similarly, around 70 percent of the electronic applications services will be provided by the German subsidiary of Thales and by other German subcontractors.

Officials in Germany have been working on a new policy aimed at ensuring such shipbuilding projects are given to German yards, but this has not impacted the current choice of Damen. The policy would make the construction of surface ships a key technology area which could enable Germany to be exempt from the E.U. requirement to consider proposals from across Europe.

German procurement agency BAAINBw eliminated the German shipbuilder ThyssenKrupp Marine Systems early on in the bidding, citing the price and the serious construction issues affecting the ThyssenKrupp-led Type 125 (F125) frigate program, a predecessor to the MKS 180. TKMS and its subcontractors experienced significant delays and cost overruns during the F-125 program, and the German government returned the lead vessel in the class due to quality problems - the first time that this has occurred in the history of Germany's navy.

After its first rejection for the MKS 180 program in 2018, ThyssenKrupp partnered with German Naval Yards Kiel and American defense contractor Alion to re-enter the contest. That bid was also turned down - a major upheaval for Germany's naval shipbuilding industry. 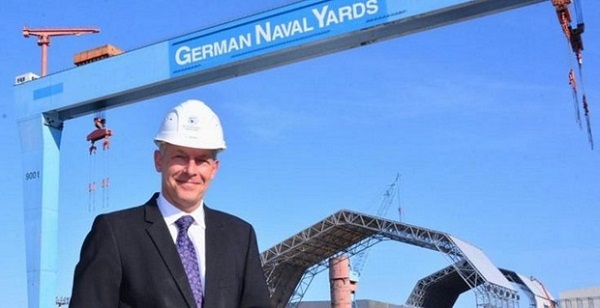 GNYL boss Jörg Herwig, speaking in an interview in November last year, said: “The project is of great importance in terms of security policy and industrial policy. And Germany needs naval shipbuilding which is internationally competitive. And finally, shipyards on the North and Baltic Seas are needed for geostrategic reasons. MKS 180 is therefore a key project for Germany in many aspects.”

What impact would the contract have on Kiel as a shipbuilding location?

“It is far too short-sighted to just take a look at Kiel. The city will undoubtedly benefit enormously from the contract because German Naval Yards is based here and will create many new jobs. Much more important, however, is the fact that the MKS 180 can provide a boost for naval shipbuilding as a whole: Local surface shipbuilding suffers from the fact that for years there have been hardly any orders from Germany. In the case of the MKS 180, about 70 percent of the value added takes place outside the shipyard. We as German Naval Yards will involve more than 200 partners from all federal states in the project.”

In the past, there have always been delays in the construction of new ships for the German Navy. What assurance does the Navy have that it will be able to receive the ships on schedule and with the required capabilities when it comes to the MKS 180 project?

“The answer is quite simple: We at German Naval Yards have recently proven that we can deliver technologically complex ships on time and within budget. For example, as a subcontractor for Thyssen Krupp Marine Systems we built two modern Meko A-200 frigates for the Algerian Navy in a record time of 44 months.

“The fact that we have been able to build four corvettes for the Israeli navy with TKMS also speaks for our capabilities. We are also part of the joint venture Korvette 130, which we are building together with Thyssen Krupp Marine Systems and Lürssen for the German Armed Forces. We also rely on such partnerships and cooperations within Germany for the MKS 180. These are the facts.”

What would be the consequences for Germany as a shipyard location if the contract was finally assigned to Dutch competitor Damen?

“In military terms, MKS 180 is a high-performance frigate. By outsourcing this type of ship to the Netherlands, Germany would automatically be thrown back in frigate construction. Without the MKS 180, the frigate 125 would be the last large ship completely developed and built in Germany. This generation of ships is based on a design that is now several years old.

“That means for Germany: We have to keep up with the technological development! Only by doing so will we meet our claim to be a leading power in Europe and in the Alliance! The Federal Government's plans to make surface shipbuilding a key national technology underline exactly this!”