Enova has pledged NOK 2.3 billion ($257 million) in support for what will become the world's largest floating offshore wind farm and a first to provide power to an offshore oil field.

The amount of funding for Equinor's Hywind Tampen project, which will help to supply the Gullfaks and Snorre oil fields with renewable energy, is the largest from Enova, which is owned by Norway's Ministry of Climate and Environment.

The offshore wind farm will consist of 11 8MW floating wind turbines which produce 384GWh of renewable power annually. This will replace about one-third of the gas the platforms are using today. The project will thus reduce CO2 emissions by approximately 200,000 tons each year the platforms are in operation.

However, Enova emphasizes that the emissions cuts are not the primary reason for supporting the project. “For us, this commitment is to bring floating offshore wind one step closer to commercialization, and all the positive effects it can have on both the global climate challenge and Norwegian business for a long time to come,” says CEO Nils Kristian Nakstad. “It is precisely such initiatives that Enova must support to fulfill our role as a driving force for the transition.”

Earlier the Business Sector’s NOx Fund decided to support the Hywind Tampen project by an investment grant of up to NOK 566 million ($63 million). 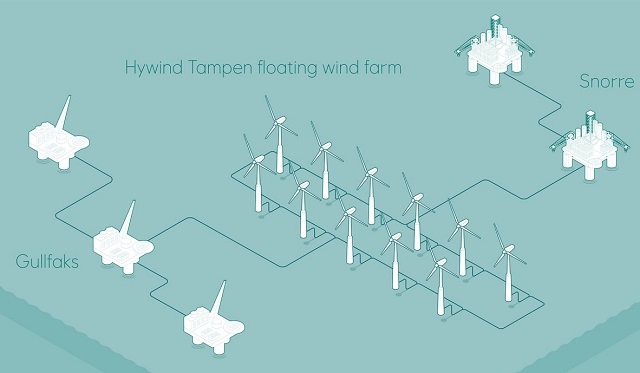 The seven partners in the Snorre and Gullfaks licenses are planning to make a possible investment decision for the Hywind Tampen project during the autumn of 2019. Additionally, the EFTA Surveillance Authority ESA must approve the commitment. As the project is related to oil production, the project is also dependent on a plan for development and operation being approved by the Ministry of Petroleum and Energy. If everything goes according to plan, the wind farm will be operational by 2022.

Currently there is only one floating offshore wind farm in the world in operation, namely Equinor's Hywind Scotland, which consists of five wind turbines of 6MW each.

South Korea has decided to transform the country’s energy mix from nuclear power and coal to renewable energy. The share of renewable energy in its power production is estimated to increase to 20 percent by 2030; aiming to add 49GW to its renewable production capacity by 2030.

The main Gullfaks field lies in block 34/10 in the northern part of the Norwegian North Sea. It has been developed with three large concrete production platforms. The Gullfaks A platform began production in 1986, with Gullfaks B following in 1988 and the C platform in 1989. Produced oil is loaded directly into shuttle tankers on the field, while associated gas is piped to the Kårstø gas treatment plant north of Stavanger and then on to continental Europe.

Located in the Tampen area of the Norwegian North Sea, this two-platform field has been producing oil and gas since 1992. Snorre A is an integrated production, drilling and quarters unit. This tension leg platform is moored to the seabed by steel tethers. Partly stabilized oil and gas from Snorre A is piped to the nearby Statfjord A platform for final processing. The oil is then loaded into shuttle tankers, while the gas is transported on to continental Europe through the Statpipe system and to St Fergus, Scotland through the Tampen link.

The Snorre B platform came on stream in 2001. This semi-submersible PDQ floater lies about seven kilometers north of the A platform. Oil from Snorre B is piped for 45 kilometers to Statfjord B for storage and export. Part of the gas is injected back into the reservoir, while the rest is transported by pipeline via Snorre A on to continental Europe through the Statpipe system and to St Fergus, Scotland through the Tampen link pipeline.