Citing increasing costs and economic uncertainties, as well as government moves to reduce support to the shipping industry, Color Line which calls itself Norway's largest shipping company in international passenger and freight traffic, reports it will retire its two oldest ships. In a reversal for the industry, Color Line plans to consolidate its freight operations, including selling its only cargo ro-ro, increasing its focus on passengers.

Starting in November, Color Line said it plans to “streamline parts of its operations,” specifically on the routes between Sandefjord-Strømstad and Oslo-Kiel. The line will reduce the service on the route between Norway and Sweden retiring the Color Viking, a 19,700 gross ton RoPax built in 1985, leaving it with one, modern hybrid vessel on the route. In addition, the Color Carrier, the company’s only dedicated ro-ro cargo vessel will be removed from the route to Germany. Color Line will continue to operate three modern, luxury passenger vessels with car decks as well as two high-speed RoPax ferries.

"These are demanding but necessary streamlining decisions,” said Trond Kleivdal, CEO of Color Line. He cited the current inflationary conditions which have increased the company’s operating costs. He specifically mentioned the significant increase in the costs of fuel, shore power, and commodity costs, as well as the current uncertain economic environment.

"Color Viking has run a year-round, daily route between Norway and Sweden for more than 20 years, but due to high energy costs and weakened framework conditions, it is unfortunately no longer financially sustainable to operate this ship on the route," he said. The Color Viking will continue to operate on a normal route up to and including November 20. The ship can carry up to 1,720 passengers and can carry up to 370 cars. The company had previously taken the vessel out of service in late 2021 due to COVID travel restrictions and a strong drop in the number of passengers on the route. Most of the company’s service was suspended until February 2022 when Norway began to reduce the COVID restrictions. The Color Viking returned to service at the end of the month. 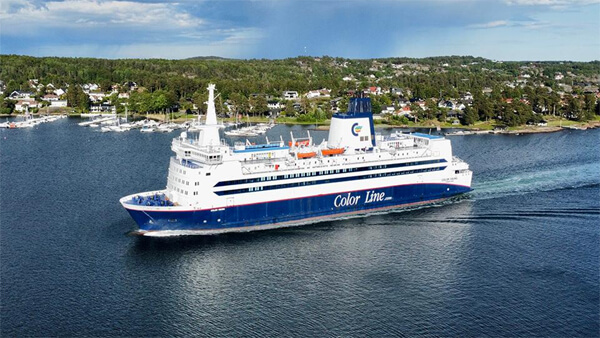 Color Line will also end the operation of its freighter the Color Carrier, which they noted was deployed on the route between Norway and Germany since 2019. “The operation is no longer commercially sustainable as a result of sharply increasing costs for fuel and increased crew costs due to weakened framework conditions,” the company commented. “This in combination with falling economic and industrial activity in Europe.” Cargo services will continue to be offered on its RoPax vessels on the route.

Built in 1998, the 8,900 dwt vessel transported trailers to Germany. During the pandemic, service was reduced on the route but earlier this year the company reported that its overall freight business had rebounded. For the first half of the year, they reported the number of freight units was 86,348, which was down from 89,337 units in 2021 due to the COVID restrictions in the first two months of the year.

The company also pointed to changes in the employment framework by the Norwegian government. “This particularly applies to the subsidy scheme for Norwegian seafarers, and in the proposal for the national budget for 2023, a further weakening of the scheme is proposed.”

After transporting 1.4 million passengers in the first half of 2022, the company was projecting strong summer travel. This included an expectation for an increase in German tourists. Color Line notes however that the government “proposes to further reduce the scope of the tax-free scheme, this time by halving the tax-free quota on tobacco for residents of Norway,” which is expected to adversely affect the overall tourist trade.

Both the Color Viking and Color Carrier are being put up for sale. Color Line expects retiring the ships will improve operating profit by nearly $5 million in 2023 compared to the current year.