Port Canaveral, located on Florida’s Atlantic coast, is undertaking a series of projects each designed to meet the growing demand on the port’s cargo and passenger facilities.

One of Florida’s newer deepwater harbors, Port Canaveral is a man-made facility created in the early 1950s. Originally envisioned by local business leaders to support the growth of central Florida, the port has rapidly expanded from its humble beginnings with the local commercial fishing industry. By the 1960s, cargoes included lumber, fuel oil, cement and newsprint, along with the military and NASA’s operations. The cruise ship homeport only started in the mid-1980s. 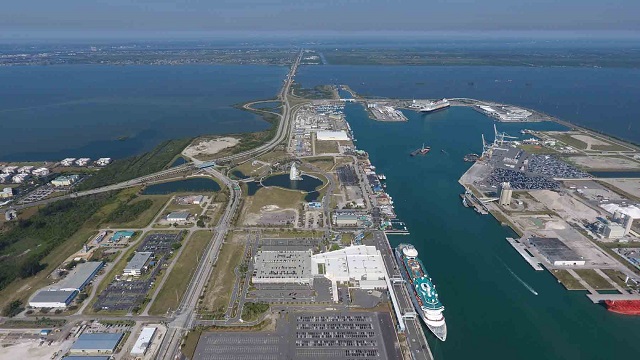 Today it is one of the world’s busiest ports with broadly diversified operations, including cruise ships, recreation, cargo and logistics as well supporting the commercial space businesses in the area. In the 2017 financial year (ended September 30), the port handled over six million tons of cargo, ranging from bulk, break-bulk, project and containerized as well as barges carrying the solid rocket boosters and other aerospace equipment. In addition, more than 4.5 million passengers passed through the port making it second only to Miami in cruise passenger traffic.

Efforts are now underway to expand both the cargo operations and cruise ship capacity in the port.

The current expansion of the cargo facilities began in 2017 with a six-month deepening project to improve access to the container cargo facilities at North Cargo Berth 5 and 6. Dredged to a depth of 43 feet, complementing the existing 44-foot deep port channel, and with no air draft restrictions, the West Turning Basin can now safely handle larger cargo vessels, including a new class of post-Panamax ro/ro vehicle carriers.

As a result of these efforts, in January, Mitsui O.S.K. Lines' Brooklands became the first of its kind and the largest post-Panamax vessel to dock in Port Canaveral. With a length of 656 feet and 125-foot beam, Brooklands is able to transport over 7,400 vehicles. Hoegh Autoliners’ largest post-Panamax vessel the Donington also called at Port Canaveral in March discharging 460 new vehicles as part of its first U.S. voyage. 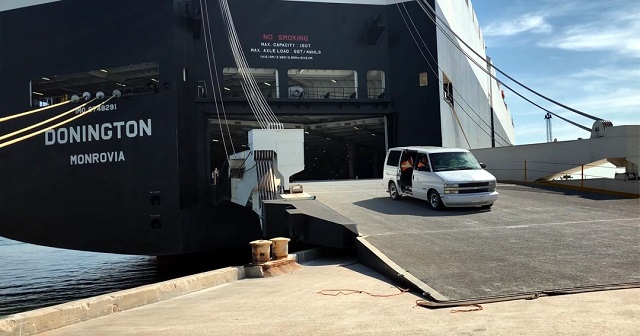 The area around cargo berths 1 and 2, with the Seaport Canaveral petroleum facility and Morton Salt operations, is currently being rehabilitated and the seawall repaired, all of which is due to be completed by June 2018. Work has also begun on a new multi-purpose cargo berth, North Cargo Berth 8, which will further expand the port’s cargo capacity when it is completed in mid-2019. Excavation and grading are underway for the project that will include a 900-foot seawall, 100-foot pier extension and will be dredged to a depth of 35 feet. The berth is being constructed with a 2,000 pounds-per-square-foot capacity so that it will be able to handle aerospace and other heavy cargoes marking Port Canaveral the first East Coast seaport to have a dedicated spaceport component.

Other initiatives include the planned purchase of a new specially designed mobile harbor crane with an 18/19 container reach and able to lift heavy loads including rockets. Currently, in the bidding process, the crane is expected to be in operations by the end of this year.

Port Canaveral, currently the second busiest homeport with nine large cruise ships, is also planning a number of improvements to its passenger facilities. According to the port’s new 30-year master plan, created by Bermello, Ajamil & Partners, passenger traffic could nearly double to eight million people by 2040. 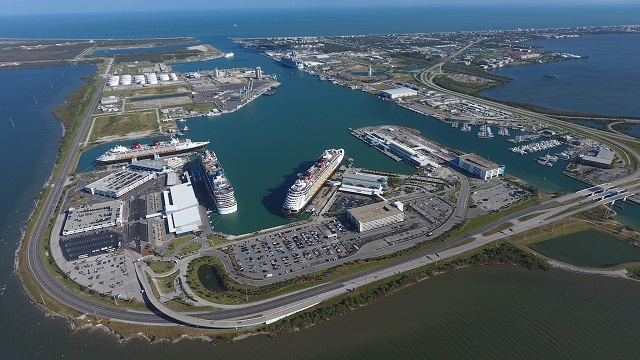 Royal Caribbean International is expanding capacity on its short cruises repositioning the Enchantment of the Seas to the port next month, and in 2019 the larger Mariner of the Seas along with one of the world’s largest cruise ships, the Harmony of the Seas, will be positioned in the port. Next month Norwegian Cruise Line’s Norwegian Sun will commence short cruises to Cuba from the port. Carnival Cruise Line is also repositioning ships with the Carnival Breeze moving to Port Canaveral in the fall and the Carnival Elation arrives in 2019.

To accommodate this growth, in the next few weeks, work will begin to decommission and then demolish Cruise Terminal 3. Currently used mostly for in-transit calls, in 2019 a new state-of-the-art cruise facility will replace it with customs and border control facilities able to handle disembarkations, and a new parking garage. Currently, the port has seven passenger terminals, including one for a casino boat operation. The master plan anticipates replacing the current Terminal 2 by 2025, expanding Terminal 5 by 2031 and constructing an entirely new terminal by 2045.

A number of smaller projects are also underway enhancing the overall facilities. In February 2018, an expansion of the south side parking area was completed increasing capacity by 150 percent to support the restaurants and businesses in the port. Port Canaveral has a recreational component with parks, public boat ramps, marinas, restaurants, retail locations and a seven-story interactive exhibit and event venue, as well as a viewing area for the launches at the nearby space facilities.

Grants to the port are funding roadway improvements and new wayfinding signage will be installed throughout the port. An additional $1 million federal funding grant is enhancing security programs and critical infrastructure, including new technologies and cyber security enhancements.

This fall, the port marks the 65th anniversary of its dedication; over this time it has become a vital part of the central Florida economy.