Fifteen months after ordering the first of its new 16,200 TEU containerships, which Maersk says will usher in a new era in ocean shipping, work began for the construction of the first of the ships. In addition to being the first large containerships designed to operate on methanol, they will also incorporate a range of features to improve operating efficiency and environmental performance.

Maersk revealed in a video and social media posting that the ceremonial first steel cut for the new 16,200 TEU vessel took place in South Korea on November 28. The shipping company noted that “A good beginning is half way to completion.”

The ships are being built by Hyundai Heavy Industries which previously valued the order at $1.4 billion. Delivery of the vessels is scheduled between the first and fourth quarters of 2024. Most of the details for the ships are yet to be revealed other than a length of 1,148 feet with a 175-foot beam. 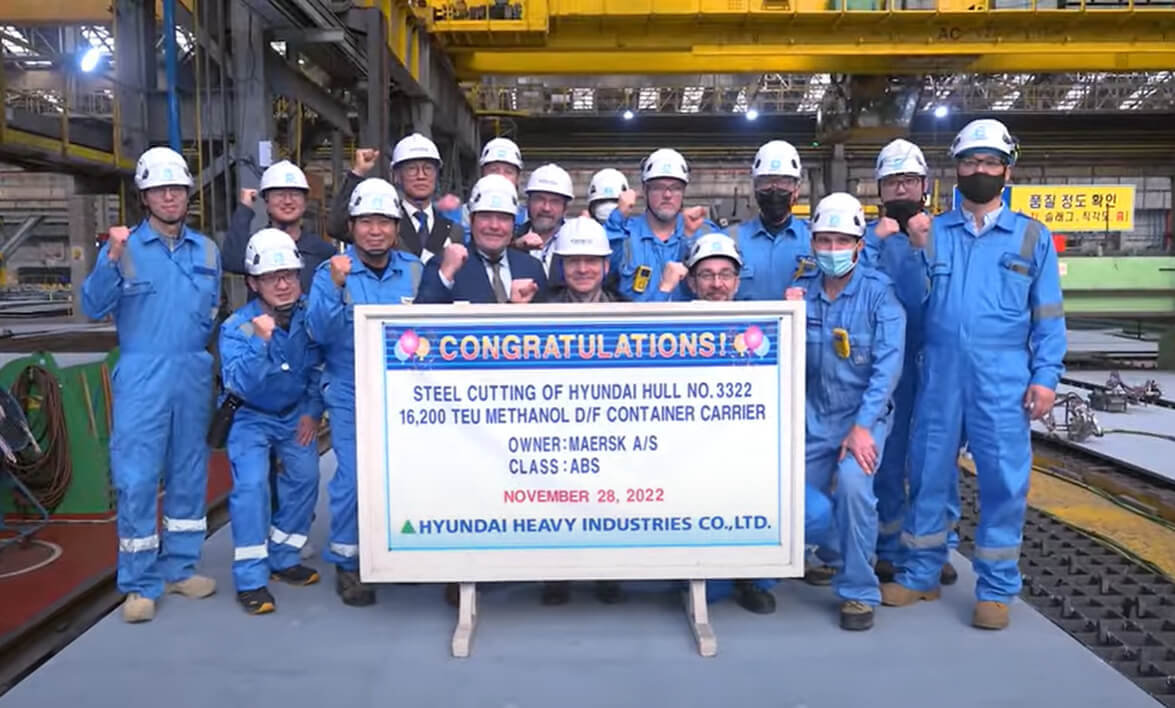 “This marks the turning point where the project moves from design into reality and we look forward to continuing the good cooperation with Hyundai Heavy Industries,” said Kristian Agdrup - Lead Naval Architect A.P- Moller – Maersk during the steel cut ceremony at HHI yard. “Production will progress fast from this point and the next key stage, factory approval test of the main engine, is expected in Spring 2023.”

The propulsion system for the ships is being developed in collaboration with makers including MAN ES, Hyundai (Himsen), and Alfa Laval, using a dual-fuel approach. While the intent is to operate full-time on methanol, they will also be able to use traditional low-sulfur fuel when methanol is not available. The vessels will have a 16,000 m3 tank meaning they are capable of completing a round-trip, for example between Asia and Europe, on methanol.

Maersk had previously said that the design for these vessels allows a 20 percent improved energy efficiency per transported container when compared to the industry average for vessels of this size. Further, the new class will provide approximately a 10 percent improvement in efficiency over Maersk’s first 15,000 TEU Hong Kong class.

Among the unique features that Maersk is incorporating into the new class of ships is the relocation of the accommodations block and navigation bridge to the front of the ship. The funnel is also being placed aft and only on one side. The placement of the blocks is designed to increase both the capacity and efficiency of the container handling operations.

After placing the first order for the methanol-fueled containerships, Maersk later exercised an option expanding the contract to a total of 12 vessels from the original eight ordered in August 2021. A further six vessels with a slightly larger capacity of 17,000 TEU were also ordered in October 2022 for delivery in 2025.

Before introducing the ocean-going methanol-fueled ships Maersk expects to gain experience with methanol operations with a smaller feeder ship. This vessel, which is being built by Hyundai Mipo Shipyard, is due for delivery in mid-2023. It will be 564 feet in length with a 105-foot beam. Capacity will be 2,100 TEU including 400 reefer units.

Following Maersk’s lead, other major shipping companies have also announced orders for methanol-fueled containerships. LNG proponent CMA CGM announced in June 2022 it was hedging its future plans ordered six methanol-fueled boxships as it looks at alternative solutions to achieve its emissions goals. COSCO also recently ordered 12 methanol-fueled containerships to be operated between its OOCL and COSCO brands while the first of the feeder lines including X-Press Feeder have also adopted the dual-fuel approach with vessels that will be methanol-ready.

To support the scale up in operations using methanol and green methanol, Maersk has been working to build an extensive network to produce and supply the alternate fuels. The company previously said one of the challenges in the adoption will be ensuring a sufficient supply of the fuel.