The Expanded Panama Canal welcomed its first passenger vessel through the new locks on Saturday with the entry of Disney Cruise Line’s Disney Wonder.

The Disney Wonder is transiting the Expanded Canal in a southbound direction from the Atlantic to the Pacific Ocean as part of a 14-night voyage from Port Canaveral to San Diego, where the ship will sail cruises to Baja, Mexico, before a summer season from Vancouver to Alaska.

The original Panama Canal has been a cruise destination for many years, and many ships where built accordingly, including Carnival Cruise Line’s Spirit Class.

The 2,713-passenger Disney Wonder was expanded to a length of 984 feet (300 meters) late last year. Previously 964 feet, a ducktail was added to the stern for improved hull efficiency making it too long to meet the original Canal’s limit of 965 feet.

The Expanded Canal allows for vessels up to 1,200 feet, so even Harmony of the Seas could navigate the expanded locks, but she would not fit beneath the Bridge of the Americas on the Pacific side of the canal.

By the September 30, 233 passenger vessels – representing a total 237,298 passengers – are expected to have transited both the original and new locks. Princess Cruises, Holland America Line, Royal Caribbean Cruises and Norwegian Cruise Line have all recently sent passenger vessels through the original locks. In addition, smaller vessels, such as the Safari Voyager and National Geographic’s Sea Lion, which call on ports in the Caribbean and along the east and west coasts of Central America, contributed to the segment's traffic as well.

The Panama Canal began accepting booking requests for passenger vessels in the new locks on April 1. So far, 18 reservations have already been made. 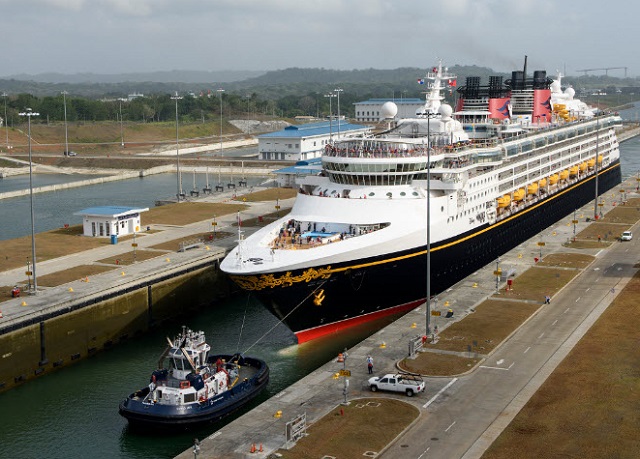 The Expanded Canal is experiencing a steady flow of traffic. On March 19, less than nine months after its inauguration, the Panama Canal welcomed its 1,000th Neopanamax vessel through the expanded waterway.

The container segment accounts for nearly half the transits through the Expanded Canal and represents its principal source of traffic. Ports around the world, and in particular along the U.S. East Coast, have already expanded or are in the process of deepening and widening their channels to accommodate the influx of Neopanamax vessel traffic due to the expansion.

LNG vessels began transiting the waterway last July for the first time after the Canal opened trade possibilities for this new market segment. So far, 5.2 LNG vessels have transited the Canal per week on average.

As of March 2017, the average number of Neopanamax vessels transiting the new lane per day is 5.9. In February 2017, the Panama Canal set a new daily tonnage record of 1.18 million Panama Canal tons (PC/UMS) after welcoming a total of 1,180 vessels through both the Expanded and original locks. The previous records were established in December 2016 and January 2017, when the waterway set monthly tonnage records for transiting 35.4 million PC/UMS and 36.1 million PC/UMS, respectively.