Transparency must be improved to eradicate illegal fishing and prevent the collapse of Ghana’s fishing industry, says a new report. Transparency is the most effective means to tackle these issues and provides much-needed accountability in a sector facing unprecedented challenges, as fish stocks plunge to their lowest recorded levels.

The report, published by the Environmental Justice Foundation (EJF) and Hen Mpoano under an E.U.-funded project, shows that the Ghanaian fishing industry suffers from a shocking lack of transparency. This allows illegal operators to disguise the identity, ownership and history of fishing vessels, avoiding detection and sanctions. As a result, illegal fishing is rife and vast over-capacity in the fishing fleet continues to decimate fish stocks.

Vessels have engaged in illegal and unreported fishing on a massive scale, targeting fish reserved for small-scale fishers and selling them to specially-adapted canoes out at sea – a hugely damaging practice known as “saiko.” A recent study by EJF and Hen Mpoano estimated that around 100,000 tons of fish were traded illegally through saiko in 2017, with an estimated landed value of $34-65 million. In 2017, industrial trawlers reported just 67,000 tons of official catches to the Fisheries Commission.

Despite Ghana’s laws clearly forbidding any foreign ownership or control of industrial trawl vessels flying its flag, Chinese companies operate extensively through Ghanaian “front” companies, a previous report by EJF revealed. Using opaque corporate structures, they import their vessels, register and obtain a license to fish. In 2015, 90 percent of industrial trawl vessels licensed in Ghana were built in China, and 95 percent were captained by Chinese nationals.

The lack of transparency in the fisheries sector can also foster corruption and significant loss of state revenue. According to the report, fines for illegal fishing are often negotiated – through opaque out-of-court settlements – to a fraction of the $1 million minimum set out in the law. Fishing license fees in Ghana are substantially lower than in other West African countries.

Improving transparency would play a crucial part in eradicating the illegal fishing that is driving the country’s fish stocks to extinction and impoverishing local communities, says the report. Many of the measures – such as publishing details of fishing licenses and their conditions – are cheap, simple, and can be implemented immediately.

“Transparency in Ghana’s fishing industry is vital to thousands of people’s livelihoods, and the food security of the entire nation,” says EJF Executive Director Steve Trent. “It is a low-cost, highly effective means to tackle illegal fishing, improve accountability and support meaningful participation in decision-making.”

Incomes of small-scale fishers have dropped by as much as 40 percent in the last 10-15 years, and Ghana is now forced to import more than half of fish consumed. Director of Hen Mpoano Kofi Agbogah, says “Revenue reporting and audits have greatly increased revenue to government from our oil, gas and mining sectors. As our fisheries face unprecedented challenges, it is more than time for the sector to follow suit.” 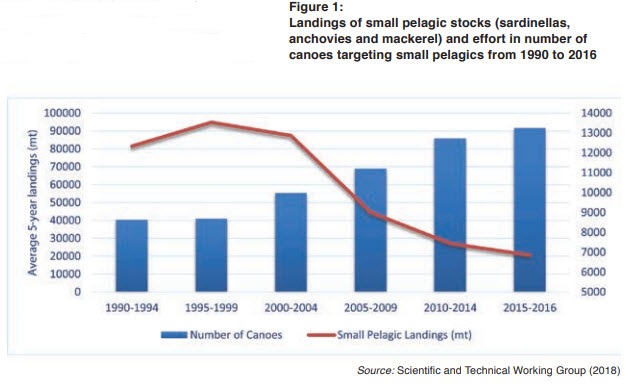