The Type 45 destroyer HMS Dragon has seized $12 million worth of heroin, marking her fifth drugs bust in three months in the Persian Gulf. The missile-defense warship made the seizure as she returned to maritime security operations on the notorious drug smuggling route known as the "Hash Highway."

The 49 kilos of drugs, which have been destroyed, would have had a street value of $12 million. The sale of these drugs is a known source of funding for terrorist organisations and criminal networks.

The bust began with an early-morning sortie for Dragon’s Wildcat helicopter, which headed out to look for suspicious vessels. Pilot Lieutenant Scott Sunderland's crew spotted a contact at range and alerted the Dragon to the dhow's presence. 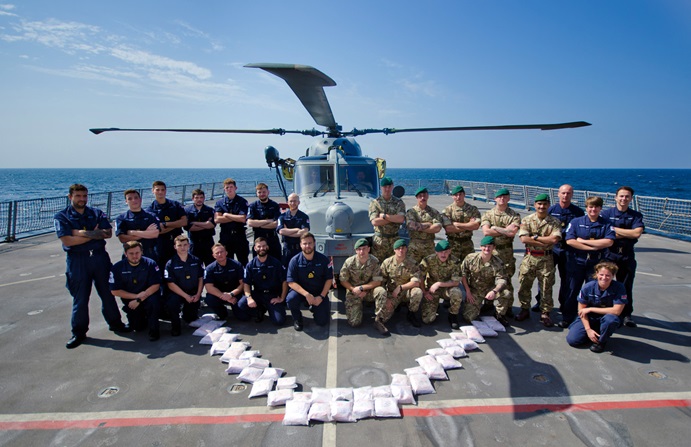 Dragon launched her small craft, and a search of the dhow by the joint Royal Navy-Royal Marines boarding team uncovered the drugs. “The team worked hard over long hours to ensure that any concealed narcotics were found," said boarding officer Lt Laurens Williams. “The inventiveness of the drug runners necessitates a detailed search to ensure that we do not miss any potential hiding places. My team have gained significant experience and skills over the last four seizures and the success today is a reward for the hours of training that have been invested by all in ensuring that these operations are conducted successfully.”

“Heroin destroys lives but, thanks to the tireless work of HMS Dragon’s crew, these criminals will not be distributing this poison and will instead face justice," said UK Defense Secretary Gavin Williamson, who was visiting the Gulf region this week. “These drugs would have had a wide distribution network across the globe, highlighting exactly why we are committed to the region – because Gulf security is our security.”