Carnival Corporation has officially began construction of a cruise terminal in the port of Sasebo, Japan.

As part of a strategic partnership agreement signed in March 2018 with the city of Sasebo and the Japanese Ministry of Land, Infrastructure, Transport and Tourism, Carnival Corporation will build and operate the new terminal, expected to open in summer 2020. Under the 20-year agreement, Carnival Corporation and its cruise line brands will be granted berthing preference.

Japan is a popular destination for seven of Carnival Corporation’s cruise line brands, including AIDA Cruises, Costa Cruises, Cunard, Holland America Line, P&O Cruises (UK), Princess Cruises and Seabourn. Overall, Carnival Corporation is expecting to accommodate an estimated two million passenger movements in the market in 2019, with nearly 800 calls from 15 ships from the company’s cruise line brands to over 50 ports in Japan.

“As the cruise industry’s first terminal in Japan, this groundbreaking is a historic day for all of us at Carnival Corporation and for our partners in this exciting project,” said Michael Thamm, group CEO, Costa Group and Carnival Asia. Carnival will continue to work with Japan’s government to identify potential additional port development opportunities and future investments in the country.

In May, Miami-based architecture firm Berenblum Busch Architects (BBA) has unveiled its design for the terminal. As the region is prone to typhoons and earthquakes, BBA’s design of the 50,000-square-foot terminal consists largely of concrete, as well as glass and steel, which will be locally sourced. The terminal’s interiors will be highlighted by wooden finishes. The program includes functions such as retail spaces, passenger waiting area, immigration, customs, offices, a second-floor terrace overlooking the sea, a public plaza, a designated car and bus drop-off area and parking. 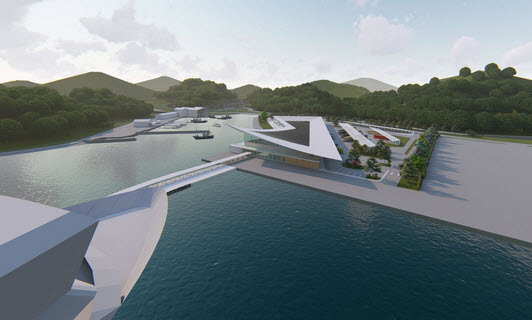