A Japanese start-up company is developing a unique vessel concept that they say will greatly expand the potential for locating offshore wind farms while also providing a cost-effective and environmentally sensitive solution to transferring power from the generation point to shore and onto the electric grid. The Power ARK 100 is a specially designed trimaran for transferring renewable energy in Japan’s coastal water.

PowerX, which says its mission is to change how the world transfers and consumers renewable energy, says that its 100 TEU trimaran will revolutionize offshore power. The company points to the challenges and limitations of locating wind farms in deep coastal waters with the need to tether the farms to shore and connect to existing power grids with undersea power cables.

Under their concept, the Power ARK 100 would be automated and carry electricity to shore in a massive battery array. It will carry 100 grid batteries able to transport up to 200MWh of power from the wind farm. Traveling on electricity the vessel would have a range of up to approximately 185 miles. Power by sustainable biodiesel and electricity the Power ARK would also be able to undertake long-distance, intercontinental power transmission. 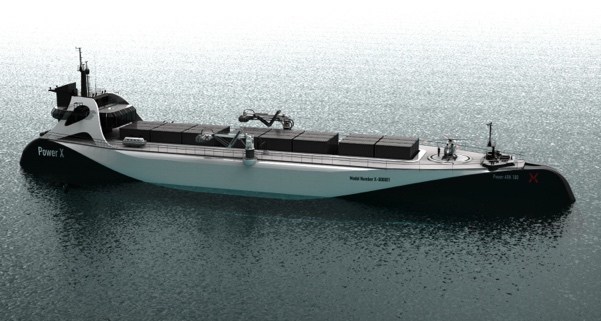 The company says their concepts are based on the current fuel tankers, but would provide a viable path to transition from burning carbon-based fuels to support the development of renewable energy projects. The first Power ARK could enter service by 2025.

The design calls for a vessel that would be 330-feet long with a beam of nearly 72 feet and 16-foot drafts. The Power Ark 100 would be 2,2200 dwt and able to operate at 7 knots and a maximum speed of 14 knots. The trimaran would be outfitted with autonomous navigation software and sensing equipment as well collision avoidance systems to support autonomous operations.

To complete their vision, PowerX is also working to build a large-scale battery packing facility in Japan. The factory would develop and produce EV fast-charging, grid, and marine batteries. Productions lines would be automated to mass-produce at a low cost. They hope to have an initial production capacity of 1GW by 2024 and will ramp up to 5GW by 2028.