Assembly work is being on China’s first domestically built large, ocean-going cruise ship. The ship, which is part of a joint venture between China State Shipbuilding Corporation (CSSC) and Carnival Corporation, is viewed as the first step for the Chinese to enter the cruise ship construction business that is currently concentrated in Italy, Germany, France, and Finland.

Carnival Corporation announced in October 2015 that it had formed a joint venture with China State Shipbuilding Corporation (CSSC) and China Investment Corporation (CIC) to launch a multi-ship domestic cruise brand in the Chinese market. The effort, which was in addition to the company cruises from China aboard its Costa and Princess cruise brands, announced in 2016 its intent to build two large cruise ships for the domestic Chinese market and finalized the agreements in late 2018.

To assist with China’s entry into cruise ship construction, CSSC and Fincantieri established a separate joint venture to grant a technology license of the ship model platform and to provide technical and project service support throughout the shipbuilding process. Among the elements of the construction being supported by this JV are project management activities, supply chain management, and sales of fundamental systems and components

The two cruise ships, which will each measure 1,062 feet in length and 135,500 gross tons, are being built at Shanghai Waigaoqiao Shipbuilding Co. (SWS), a subsidiary of China State Shipbuilding Corporation (CSSC). The first steel for the ships was cut a year ago while CSSC has also been developing the infrastructure to support its entry into cruise ship construction. One of the dry docks at the SWS yard was renovated to accommodate cruise ship construction, a new office building, facilities to support contractors and a new block assembly line were all established.

In Shanghai on November 10, 2020, the first ship began its dry dock assembly phase. The ceremonies included the traditional Western-style coin ceremony where a souvenir coin is placed in the dry dock below the first keel blocks for good luck.

CSSC and SWS also announced the signing of a contract with Marine Interiors, a subsidiary of Fincantieri, for the supply of approx. 2,800 cabins modules to be installed on the first ship. Fincantieri cited this contract as demonstrating the validity of their decision to form the joint venture with the Chinese shipbuilder. 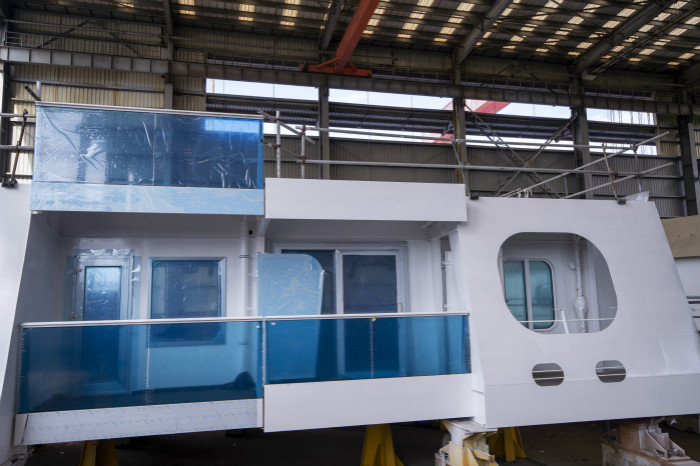 SWS recently also displayed the first cabin units built for the new cruise ship. The prefabricated balcony model cabin included the prefabricated balconies, balcony doors, and windows, balcony glass railings, and partitions. According to SWS, the smooth completion of the balcony model cabin, which was the first-ever completed domestically, is a verification of the construction standards and technological process, establishing confidence in the subsequent construction of cabins. Zhou Qi, the yard’s deputy general manager, pointed out that the interior decoration project is a new field for the company, and it is also a key element of concern to the shipowner.

The shipbuilders have been following a methodical process in careful steps to develop the design and the specialized technical skills needed to build a cruise ship. Among the areas they are also currently working on is the ship’s laundry and the equipment to support onboard catering. Zhou Qi noted that the yard is learning the technology and construction management while emphasizing the importance of working together and strengthening communications with Fincantieri and other contractors on the project.

“The production is moving forward as planned. This is an excellent sign for the cruise industry in China and it confirms the strong commitment of Fincantieri, CSSC, and the Carnival group,” said Giuseppe Bono, CEO of Fincantieri.

The new cruise ship, which will accommodate about 4,250 passengers, will be delivered in 2023. The 2018 JV also gives CSSC Carnival Cruise Shipping Limited the option to order four additional China-built cruise ships. CSSC Carnival also agreed to acquire two existing cruise ships from Costa Cruises, which it will use to launch the new cruise operation. No date has been announced for the new company's first cruises.