A new £40 million ($50 million) wharf to moor the RRS Sir David Attenborough has been used by polar ships for the first time at British Antarctic Survey’s Rothera Research Station in Antarctica.

The 74 meter wharf was built over 18 months through during two Antarctic summers (November to May) by a 50-strong team from construction partners and designers of the wharf, BAM, with the support of Sweco and technical advisors, Ramboll. Turner & Townsend also provided cost management for the project.

Building a new wharf in one of the world’s most remote locations presented a number of challenges. Maintaining the highest standards of biosecurity and demonstrating that the operation has no lasting negative impact on the natural environment was vital in the construction of the wharf, so all site team members received environmental and biosecurity training before deploying.

Every nut and bolt needed to be accounted for and the 4,500 tonnes of equipment was shipped 11,000 kilometers from the U.K. to Antarctica. The construction team practiced full-scale assembly of the 45 tonne steel frames in Southampton to identify unexpected challenges or additional pieces of equipment needed whilst still in the U.K.

The team also needed to clear 2,000 tonnes of snow this November as the site was not operational during the dark Antarctic Winter. The team then worked on completing the wharf’s skeleton of 20 huge steel frames, weighing over 1,000 tonnes in total. The wharf was then backfilled with rocks, to complete the structure.

The first ships to make use of the wharf at Rothera Research Station was the RRS James Clark Ross on its resupply call last week, along with the MV Billesborg this week carrying cargo for ongoing construction projects. 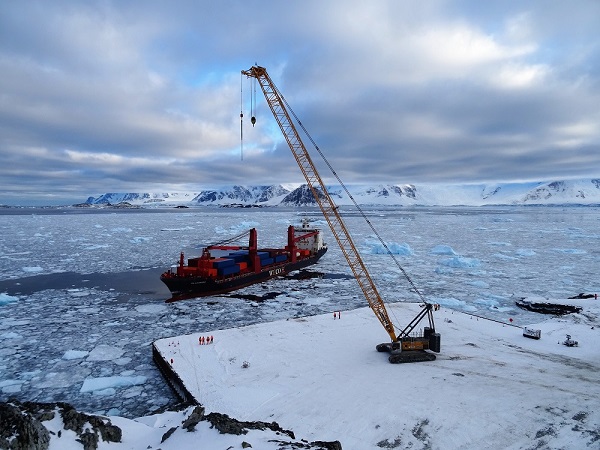 The MV Billesborg ship arriving at the new Rothera Wharf

The new wharf will enable the RRS Sir David Attenborough to bring supplies and people to Rothera Research Station. It also has a new crane to launch small science boats, a personnel gangway and a floating pontoon to deploy scientific instruments.

The new wharf, which replaces a smaller structure built in the 1980s, is part of the Antarctic Infrastructure Modernisation Programme (AIMP), commissioned by the UK Research and Innovation’s (UKRI) National Environment Research Council (NERC).

While the wharf equipment will be formally commissioned and accepted later this year, the wharf’s completion has allowed it to be used to demobilize this year’s building program early in response to COVID-19 precautionary measures.

The RRS Sir David Attenborough is being built by Cammell Laird and is in the final stages of construction. She is capable of breaking through ice one meter thick at a speed of three knots and will carry up to 30 crew members, plus 60 scientists and support staff.

The ship’s diesel-electric propulsion system is powered by two six-cylinder and two nine-cylinder Rolls-Royce Bergen engines. These provide electrical power generation for the electric propulsion motors, auxiliary systems and hotel services. The configuration of different engine sizes allows for efficient operation across the wide range of conditions that the vessel is likely to encounter. The generators are supported by battery banks that ensure that the generators run at as near to as constant loading as possible in order to smooth the variable loading normally seen in seagoing vessels. This more constant loading will result in an increase in efficiency and therefore lower diesel consumption.

RRS Sir David Attenborough’s engines run on low sulfur fuel containing less than 0.1 percent sulfur and have good fuel efficiency down to very low loads by using Variable Valve Timing. They are fitted with a Selective Catalytic Reduction (SCR) system and feature an electronic engine management system with an integrated control unit, designed to monitor and control all key engine functions and exhaust after treatment. 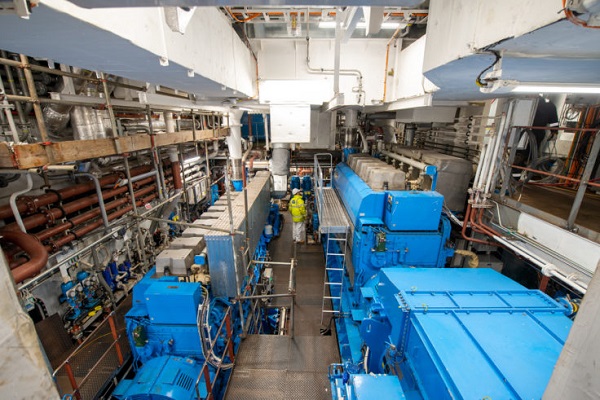