An In-Depth Look at Viking's LifeCraft

Viking Life-Saving Equipment is introducing a unique new approach for lifeboats that it believes will offer strong advantages for mid- to large-sized passenger vessels. After 10 years of development, the Viking LifeCraft System recently received official approval from its first flag authority, the Danish Maritime Authority (DMA), and the company is currently in discussion with a number of shipowners about the advantages of the new approach.

According to Niels Fraende, Vice President of Viking’s Cruise & LifeCraft Division, the concept for the LifeCraft came about as a result of discussions 10 years ago looking for a safer way to handle passenger evacuations. Viking was encouraged by the IMO to continue the efforts, and early in the development process they also worked with major passenger ship operators to learn the typical demographic distribution of passengers and the issues in operation.

The solution is the LifeCraft, which is made up of four inflatable Viking LifeCraft survival craft each with a capacity of 203 passengers, or a total of 812 people. Stored on deck or built into the side of the ship as a single unit in a compact locker, the system requires just 25 percent of the space for a similar lifesaving capacity. It is also lighter in weight, placing less load on the deck than the traditional ridged lifeboats or tender boats and requires no overhang, which is a concern for example on vessels transiting the Panama Canal.

Viking’s system includes a lifting yoke that moves the crafts into four positions, from storage to preparation for launching and into the water where it inflates. Launching is supervised by a safety officer and is fully automated and supported by an extensive training routine. It is powered from the ship with multiple redundancies, including stored energy with accumulators or the ability to run from the ship’s emergency generators.

The LifeCraft system is the first alternative system to gain approval as a Novel Life-Saving appliance and it meets all SOLAS requirements. The unique design also permits the system to address a broad range of list and trim conditions. In fact, it was tested to a 25-degree list during its November 2018 heavy weather sea trials which Fraende points out exceeds SOLAS requirements and is beyond normal stability. With each chute able to handle up to 450 people in 30 minutes, the capacity far exceeds regulatory requirements. 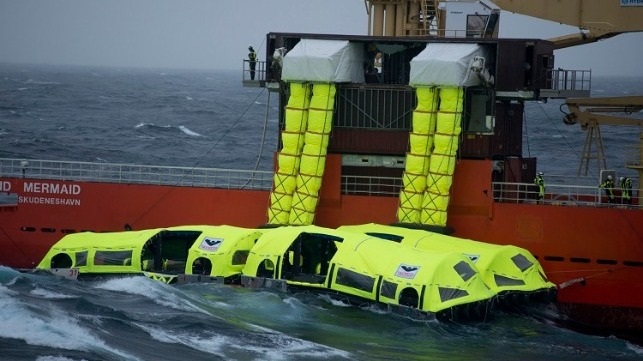 Once inflated in the water, loading is achieved by the four independent chutes, and unique to the Viking system are hoists to make the system ADA accessible - dealing with accessibility-challenged individuals. The system is designed to handle 12 people in stretchers, both in the hoist and with four spaces in each craft to secure stretchers. With loading completed, the four lifecrafts can separate and each has its own electric engine making it highly maneuverable with the ability to rapidly turn 360 degrees.

Viking highlights that the system is equipped with an intelligent monitoring system that every 24 hours runs an automatic test. Monitoring and reporting is accessible on the bridge, and the system stores data.

“We had to prove reliability beyond what was done in the past because of the unique nature of the system and the strict worldwide standards in lifesaving,” points out Fraende. The United States Coast Guard has been involved in the process, and now having gained acceptance from the first flag authority, Viking anticipated that the IMO will distribute a notice to members and that they will gain additional flag approval and letters of acceptance.

On cruise ships that require tender boat capabilities, Fraende anticipates that the Viking LifeCraft will be used in conjunction with the traditional rigid lifeboats, but will help to address the larger capacity of the new cruise ships. Ferries, he points out, in some cases have already replaced traditional lifeboats with inflatables, but this system requires less space and provides greater capacity. In addition, they anticipate that the system might appeal to a number of utility vessels where the concern is to reduce or remove interference on deck.

Designed for safer and smoother evacuations, Viking is engaged in conversations with shipowners and builders anticipating LifeCraft could be deployed by 2022 or 2023. It might also be retrofitted onto ships currently in operation.