A series of engineering casualties aboard the 49-year-old cutter Alert forced her crew to end their latest counternarcotics patrol and return to port. The Alert departed Astoria, Oregon last month to conduct a patrol in the Eastern Pacific. However, the ship suffered more than 35 equipment casualties within the first 19 days of her patrol, including problems with her radar, propulsion and fuel systems. The ship’s main diesel engine also suffered a crankcase explosion due to a seized bearing on an oil pump. Ultimately the decision was made to end the patrol.

“We left on patrol with great hopes and a crew at top performance, thoroughly trained and operationally tested, but one of our main engines broke, sending us home before we got into any operations,” said Cmdr. Tobias Reid, Alert's commanding officer. “Our engineers did an outstanding job responding to the casualty and put a huge amount of effort into repairing the engine on station, but it requires an extensive overhaul that can only be completed at home.”

The Alert was commissioned in 1969 and is one of 14 Reliance-class medium endurance cutters in the Coast Guard’s fleet. She supports counter-smuggling missions from the U.S.-Canada border to South America.

The Coast Guard’s fleet of medium endurance cutters will be replaced by a new class of offshore patrol cutter, and deliveries will begin in fiscal year 2021. “The offshore patrol cutter will be the backbone of Coast Guard offshore presence and the manifestation of our at-sea authorities,” said Adm. Paul Zukunft, commandant of the Coast Guard. “It is essential to stopping smugglers at sea, for interdicting undocumented migrants, rescuing mariners, enforcing fisheries laws, responding to disasters and protecting our ports.”

On Tuesday, the crew of the cutter Bertholf offloaded 16 tonnes of cocaine on the pier at the Port of San Diego. The amount would be stunning if it were announced by shoreside law enforcement, but thanks to the Coast Guard's efforts, massive cocaine busts in the Eastern Pacific have become routine. The service captured almost enough cocaine last year to pay for its own operating budget (if it were all sold). 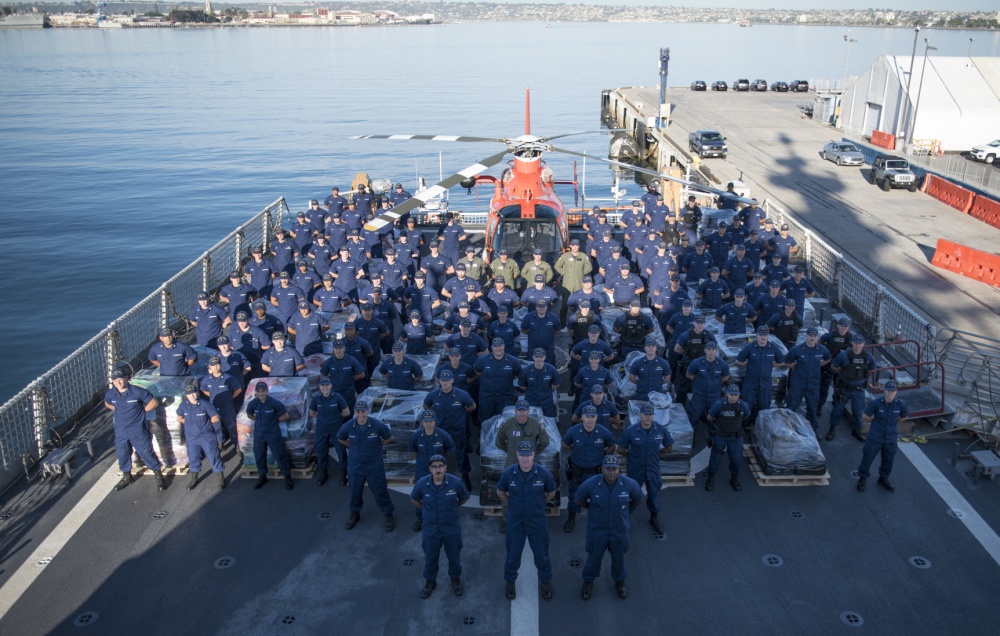 “This offload by the Bertholf represents the great work being conducted in the Eastern Pacific combating the transnational organized crime groups, behind the drug trade which spread instability, fear and harm to people, communities and entire nations,” said Rear Adm. Todd Sokalzuk, commander of the Coast Guard's 11th District. “Thanks in part to the to the hard work and dedication of the brave crew men and women of the Bertholf, and other ships on patrol, we’re seizing record amounts of cocaine for the third year in a row.”

Bertholf's cargo includes drugs captured by five Coast Guard vessels - Bertholf herself, along with the cutters Diligence, Venturous, Bear and Harriet Lane. Diligence and Venturous are Reliance-class cutters like the Alert, and both are in their fifth decade of service.