Widely used so-called energy efficiency indices and KPIs measure CO2 emissions, and there is indeed a connection between energy and emissions, but the distinction should be made clear.

Recently, SSPA Sweden AB performed a study on behalf of the IMO, focusing on the optimization of energy efficiency as part of the implementation of a Ship Energy Efficiency Management Plan (SEEMP).

Connected to air pollution and a reduction in greenhouse gas emissions, energy efficiency has been an issue within the IMO for a considerable time. MARPOL Annex VI was adopted in 1997, mainly focusing on air pollution in the form of NOx and SOx emissions, and, with resolution MEPC.203(62) in 2011, the focus was shifted towards CO2 by a host of technical and operational measures designed to provide an energy efficiency framework for ships. These measures came into force on January 1, 2013 under chapter 4 of the MARPOL Annex VI which made the Energy Efficiency Design Index (EEDI) and SEEMP mandatory elements for all ships.

The SEEMP provides a possible approach for monitoring ship and fleet efficiency performance over time. An upcoming regulation, also focusing on CO2, is the E.U. MRV Regulation 2015/757 and, as of January 1, 2018, shipping companies will be required to monitor the CO2 emissions of their vessels per voyage for all voyages conducted into, between and out of E.U. ports.

The different factors also impact upon each other. A technical solution optimized for a specific trade and operational pattern will most probably not be optimal if the trading pattern is changed; for instance, by changing the operational area, speed or cargoes. Education and awareness are a prerequisite for successful work on improved energy efficiency. Of course, this also includes a good understanding of the basic facts.

Hydrodynamic properties are very important for a vessel’s energy efficiency, with two major components being hull optimization and hull-propeller interaction. The hull and its main dimensions are optimized to reduce the two main resistance parts, namely the frictional (or viscous) resistance and the wave resistance.

In general, it can be said that the energy consumption per transport work is reduced in line with the size of the vessel. This is mainly owing to the wetted area increasing (in principle) with the length squared whereas the cargo capacity increases with the length cubed. Consequently, the power demand grows more slowly than the transport capacity.

The figure below illustrates the dependency of speed and vessel size with regard to their energy consumption. 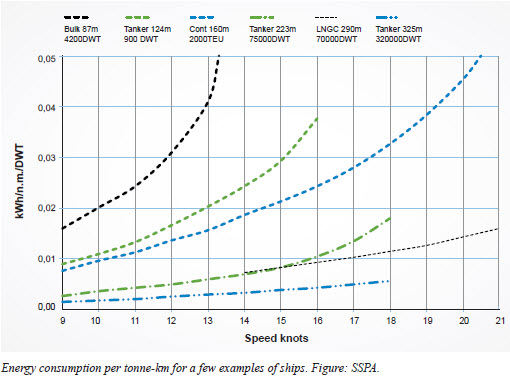 A slow ship is more energy efficient than a fast one, with a speed reduction of 10 percent typically resulting in a reduction of fuel consumption/per distance of about 20 percent. The most direct way to reduce the EEOI is therefore to reduce speed.

The slow steaming that is widely practiced today is therefore a very efficient way of reducing energy consumption. Yet, whether the slow vessel is more efficient when logistic, economic and other factors are also considered remains another issue.

Discussing energy efficiency without taking speed into account, which is essentially what is done in the EEOI and EEDI, is therefore not a complete way of describing the problem and can sometimes result in faulty conclusions. If design efficiency is to be compared, it has to be done by comparing vessels operating at the same speed (or equalizing them by using relevant calculation methods).

Voyage planning and, for liner traffic, adjusting timetables, including keeping speed as low as possible, is an effective measure. However, the way in which charter party terms are stipulated affects a vessel’s possibility of optimizing its energy consumption.

Efforts have been made on contractual regulations on energy efficiency as evidenced by the virtual arrival processes launched by Intertanko and OCIMF and the slow steaming clause by BIMCO aimed at saving fuel through speed reduction.

Despite standard clauses being included in charter parties, there are still considerations to be made before all operational aspects are covered. Clauses related to where, when and within which time frame the voyage should be executed need to be taken into account as well as those clauses related to a vessel’s performance and guarantees on speed and bunker consumption. In addition, demurrage and dispatch clauses as well as ready berth clauses provide further examples of aggravating factors on contracts for energy efficiency through speed reduction.

Performance monitoring is another measure with possible substantial impact, but this requires thorough follow-up and the ability for it to be adjusted when needed. Optimum speed, load factor and trim also need to be fully understood as properties unique to each ship that will impact upon energy efficiency. This applies to both onboard and operational shore personnel, with shipowners also needing to be included in such discussions, since a ship’s performance is a vital part in any contractual discussions with charterers.

For new vessels, SSPA assists in defining operational profiles at an early stage and sets, for example, capacities, main dimensions and operational speeds. We also assist in hydrodynamics model testing and CFD calculations, which can assist in optimizing the hull and propellers by taking a range of cargo conditions, speed profiles and operational areas into account.

Route optimization is another measure with possible large impact on energy efficiency for new builds as well as existing vessels, where SSPA provides extensive support. Furthermore, for vessels already in operation, technical optimization could be granted by way of trim and controllable pitch propeller optimization and the design of energy saving devices. SSPA can also judge and optimize operational efficiency based on operational data and suggest technical and operational improvements. We also assist in optimizing vessels for a change in operational profile by a hull and propeller redesign and can offer guidance on optimum settings for propulsive machinery.

Maria Bännstrand is a Project Manager at SSPA.