Leer is a picturesque town in Lower Saxony, two hours south of Hamburg. But with a seafaring academy that boasts 160 years of history and the headquarters of one of Germany’s most prominent shipping groups, Leer is also one of the country’s major hubs for maritime expertise. Today, the Hartmann Group, founded by Alfred Hartmann, is a heavyweight in the international tanker business. But this company emerged from very humble beginnings.

Alfred Hartmann was a shipmaster by trade and had a vision to build his own shipping company. Starting off with one coaster vessel just over 30 years ago, Hartmann has managed to grow his fleet from one to about 150 vessels and his company to a business with 5,000 employees on land and at sea. In 2008, Hartmann placed the leadership of his company into the hands of his son Niels, but continues as Chairman of the Supervisory Board of the holding that owns the shipping company and President of the German Shipowners Association VDR.

“Our founder’s three guiding principles – ensuring access to cargo, extensive crew training and diversification – continue to apply to our work today. And I think they have been the key to our success,” says Michael Ippich, Managing Director Operations of Hartmann Shipping Services. “For example, we recruit and train our crews ourselves. With crewing agencies in Poland and the Philippines and state-of-the-art training centres located in both Leer and Manila, we can make sure that our officers and crews are well trained across all disciplines,” he adds.

To diversify its fleet, the Hartmann Group not only operates gas and product tankers, but also container vessels, bulk carriers and coasters. “Since an economic downturn never really affects all ship types equally, diversification helps us strike a balance,” says Ippich.

Diversification can be realized on a regional basis as well: roughly half the fleet – mainly gas tankers, container ships and coasters – are managed from Leer, while the rest – product tankers, cement tankers and handysize bulkers – are operated from Cyprus. “We have created Centers of Excellence in both places to pool our know-how for the benefit of our customers,” Ippich points out. For example, operating gas tankers takes specialized expertise: “You can’t just go ahead and open a gas tanker company one day – the oil majors won’t trust you so easily.” Safety is the top priority, which is why the market considers 20 years as the right age for a gas tanker to retire, even if the ship is still in good condition. The average age of the Hartmann gas carrier fleet is currently around 12 years.

For a long time the shipping company was hesitant to launch newbuilding projects: “We only build ships when we know we have a long-term charter agreement,” says Ippich. A while ago a new opportunity arose when the Saudi Arabian company Sabic indicated it wanted to ship ethane from Houston, Texas, to Teesport in northern England on a regular basis: ethane, available in large quantities in the US market, is used as a raw material for PVC and polyester production.

“Sabic essentially wanted to establish a floating pipeline, so to speak,” says Ippich. This was to become one of the most fascinating projects of the segment, leading to the development of the ECO STAR 36k class, a new generation of gas carriers, which recently celebrated their debut in the Hartmann Group’s fleet.

The DNV GL-classed vessel, GasChem Beluga has been sailing between Houston and Teesport for several months now. Built by the Sinopacific Offshore and Engineering shipyard in China, this vessel was the largest LEG carrier with Type-C tanks when it came into operation. The ship sails under a long-term charter for SABIC Petrochemicals B.V.

Developing the vessel design was a complex project that took several years and brought together Hartmann, DNV GL, the Hamburg Shipmodel Basin (HSVA) and the Oldenburg-based engineering company HB Hunte. “We had very specific requirements, so it was a challenge to ensure that the final vessel concept had the exact ship weight and draught we needed,” says Ulrich Adami, Technical Director and Fleet Manager at Hartmann Reederei. “The collaboration with our partners was excellent and their input was instrumental for the success of this project,” he adds.

A key requirement was to boost the cargo volume significantly compared to conventional gas carriers without lengthening the vessel, in order to remain within the size limits of certain terminals. The result is an innovative tank design called “Star-Trilobe” which essentially consists of three horizontal cylinders joined in a cloverleaf configuration. These steel tanks, each weighing in at roughly 7,500 tonnes when filled, are placed on a special wooden bed inside the ship’s hull. They are flexible enough to withstand the pressure caused by temperature differences.

“The biggest challenge was the structural integrity versus weight equation,” says Adami. Tanks of this size capable of handling minus 104 degrees centigrade, the temperature of liquefied ethane, had never been built before. The Trilobe tanks improve utilization of the available space inside the ship’s hull by about 25 per cent compared to conventional bilobe tanks, while offering a much better volume-to-weight ratio.

Adami felt very strongly about having the DNV GL experts on board right from the start: “This was a joint brainstorming process, and getting the class perspective on the different options from the start was essential to determining the feasibility of the tank design.”

Making sure the vessel achieved significant efficiency gains and was equipped to operate under the challenging conditions in the northern Atlantic were also at the top of the wish list. “These ships travel from America to Europe fully laden and return empty. This meant we needed to ensure stability without needing excessive amounts of ballast water. In the winter, the vessel may face waves of up to 12 metres in the northern Atlantic. The solution for the new 36k carriers was a special hull design including a Svelte bow and a bridge located near the bow to optimize weight distribution,” says Matthias Malinowski, Ship Type Expert Gas Carriers at DNV GL.

To boost efficiency the designers developed a smart combination of propulsion components: the ships are fitted with an innovative MAN B&W engine, the world’s first quadruple-fuel engine (capable of burning heavy fuel oil, marine gas oil, LNG and ethane). “The first voyages have shown the fuel switchover process to be quick and painless,” says Adami.

A special feature of this engine is its high-pressure injection system which avoids methane slip almost entirely. For additional efficiency gains the engineers added an MAN Kappel adjustable, high-performance propeller with an HB Hunte Twist-Flow rudder behind it. “To a layman these look as if they were bent out of shape,” the expert remarks. “However, the result of the project, which has been confirmed by model tests at HSVA, is by far the most efficient gas carrier the world has seen. While we refrained from painting the ship green, it is in fact a totally ‘green’ ship,” says Adami.

In terms of financing the two 36k vessels, the Hartmann Group chose an innovative approach: owned by Norwegian investment company Ocean Yield, a member of Aker ASA Holding, the vessels are operated by Sabic as the end customer under the technical and commercial management of the Hartmann Group as the charterer, who also handles crewing. 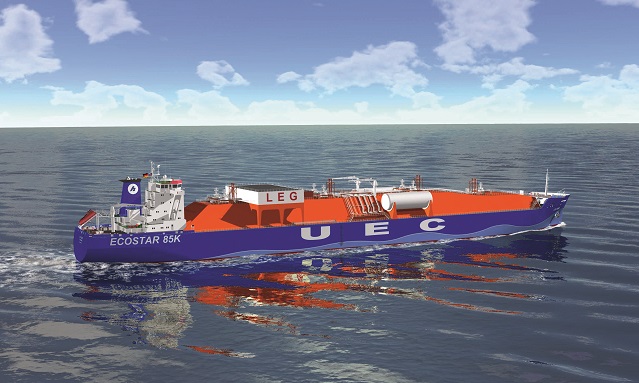 Record. The vessels of the 85k series will be the world’s biggest gas carriers.

The sister vessel of GasChem Beluga, GasChem Orca, is due to be delivered this summer. And soon, the Hartmann Group will set a new record for the world’s biggest gas carriers, with a series of 85k vessels. The first ship in this series is currently under construction at Dalian Shipbuilding Industry Offshore in China.

When it hits the water, it will be able to carry nearly two-and-a-half times the amount of cargo as GasChem Beluga. Equipped with Star-Trilobe tanks and highly efficient multi-fuel engines, the 85k VLECs follow in the footsteps of the 36k series. This time the owner is Luxembourg-based Jaccar Holdings, and the ships will be chartered out to the Chinese energy company Oriental Energy. They will commute between the U.S. and Southeast Asia.

It was not until 2012 that the market began demanding VLECs carrying more than 25,000 cubic meters. Until then, the common assumption was that Type-C tanks larger than 40,000 m3 were not feasible, and that future ethane carriers capable of transporting in excess of 80,000 m3 would use either prismatic Type-B tanks or several membrane systems. But a comparative study by DNV GL of typical 83k VLGC hull scantlings, which would also apply to 85k very large ethane carriers (VLECs), concluded otherwise.

“We also performed fatigue and crack propagation analyses and supported the designers in specific areas such as the twin saddle, swash bulkhead and triple Y-joint design tasks, enabling significant improvements to the 36k Trilobe design,” explains Matthias Malinowski from DNV GL. The fatigue strength and fracture mechanics verification performed by DNV GL was extended from a 20-year to a 30-year tank lifetime.

“We feel honored to be part of this project as a classification society. It is not only sheer size but also the technical innovations that make these vessels a real breakthrough for the industry,” says Torsten Schramm, President Maritime of DNV GL.

According to Michael Ippich, Hartmann’s Managing Director Operations, the market is watching very closely to see how this new vessel class performs. “But after such a positive development process, we are confident that it will set a new standard for this segment.”