As the remains of the first British ship to be sunk in World War II are thought to have been found, maritime charity Sailors’ Society’s archives reveal a first-hand account of the aftermath.

Marine scientist and author David Mearns claims to have found the wreck of the SS Athenia, which sank into the Atlantic off the Galway coast 78 years ago, torpedoed by a German submarine the same evening that war with Germany had been declared.

The SS Athenia was a steam turbine transatlantic passenger liner built in Glasgow in 1923 for the Anchor-Donaldson Line, which later became the Donaldson Atlantic Line. She worked between the United Kingdom and the east coast of Canada until September 1939, when a torpedo from a German submarine sank her in the Western Approaches. 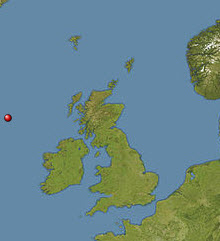 She was carrying 1,103 passengers, including about 500 Jewish refugees, 469 Canadians, 311 U.S. citizens and 72 from the U.K., and 315 crew. There were 117 fatalities. Many died in the engine room and after stairwell, where the torpedo hit. More died when lifeboats was crushed by rescue vessels. However, rescue effort by six ships were nothing short of heroic, according to testimony. 1,306 individuals were successfully pulled off the Athenia in deteriorating seas.

The dead included 28 U.S. citizens, leading Germany to fear that the U.S. might react by joining the war on the side of the U.K. and France. German authorities denied that one of their vessels had sunk the ship until January 1946.

Sailors’ Society found an account of the rescue efforts of its Galway chaplain, painting a picture of wartime spirit from the very start of the war.

The Rev. A. J. Gailey, Presbyterian Minister at Galway, had recently accepted the office of Honorary Representative of the Society when, on September 3, 1939, a message came from a Norwegian ship, the Knute Nelson, to say it was carrying hundreds of survivors of the attack.

“Within 20 minutes of first hearing the news we were busy,” said Gailey in the charity’s October 1939 edition of its Chart and Compass magazine.

“In company with a young priest I was allocated to the pilot-boat, which was to leave Galway at midnight. Home for a coat and rug and hot coffee in flasks. With the doctors, two police officials and the priest I joined the pilot at midnight and put in one of the most uncomfortable nights of my life. 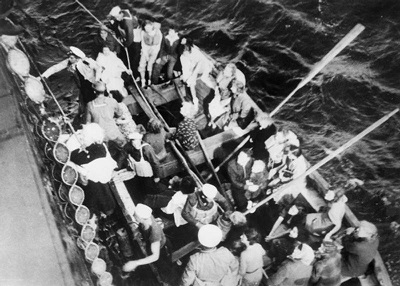 “We were a party of 10 in a small cabin which accommodated four at a pinch, and we were in the open on a rough night until we picked up the Knute Nelson at about 8am on Tuesday. When we came alongside we went up a rope ladder, 60 feet to deck, to meet a sight I have no desire to see again. There were nearly 600 people on a boat which had accommodation for 40 in her cabins. They were on deck, ‘tweendecks, in corridor, everywhere; but they were able to manage a cheer.

“The doctors went at once to the casualties, the police officials to the task of listing survivors, and the priest and myself about the task of talking to the nervous and anxious and bereaved. Morale was wonderful, but clothing was bizarre in the extreme. Some had dry clothes and some had shrunken clothes; some in night attire and some in flimsy frocks; if your boots and stockings were gone, wisps of straw did duty – or bare feet. Failing all else many had blankets. Bruises, burns, cuts were the order of the day, but everyone was making the best of it.

“In two hours, we joined the tender off the harbor at Galway, and it was then that the nerves of some began to fail and they broke down. Casualties first and then the motley collection of the saved were carried or helped down to the tender where they had at last full surgical and medical aid and also food. With a cheer for the Knute Nelson we made for the dock and the last trans-shipment. In the customs shed was a meal for everyone who had not to go at once to hospital. By the time folk were fed they were also labeled for a hotel, and were sent off by car or bus. When all was cleared up and the victims were in their homes we were just fit to have a sort of meeting and stagger home.

“Next morning and afternoon and evening I spent in charge of the accurate detailing of information about the hospital cases an in getting in touch with their relatives. That was Wednesday and the task of clothing 500 people was well under way. Since that the authorities and our volunteer helpers have been busy at hotels, hospitals, docks, and police barracks from 9am until midnight and after.

“Some of our guests are gone and the majority seem likely to go soon; but some will remain for days yet and we have still 19 hospital cases.

“We have Americans and Canadians, British, French, Germans, Austrians, Czechs, Lithuanians and many Poles. Of the total number, crew and passengers, about 40 percent are Presbyterian. These hail from Northern Ireland, Scotland, Canada, USA and New Zealand; 10 of them are in hospital.

“The crew were chiefly Presbyterian and were tremendously pleased to see a Presbyterian parson, albeit unshaven and dirty, tumbling over the side from the pilot-boat. Altogether the experience was unforgettable and has justified the link I have maintained for our church and the Port of Galway.”

The charity also supported survivors in Glasgow, where port chaplain J.R. McDonald, spent time with anxious relatives and visited hospitalized men who were injured in the sinking.