Modern automation systems for ship propulsion perform a variety of complex tasks, thus offering a great range of options for optimizing ship operation. They are part of an overall system on board and are connected to other subsystems. The companies SCHOTTEL and Bachmann electronic thematize the requirements automation systems must meet, for example, with regard to functionality or safety.

Vessels are increasingly viewed as ecosystems and as complex constructs consisting of a multitude of subsystems. Successful and economical ship operation depends on the optimal interaction of these individual elements. This places high demands on interface connection, communication, and control of the interacting components. This is especially true in view of the wide variety of applications and how these components are combined. Almost every vessel has to be regarded as unique.

For the control of main and auxiliary propulsion units, flexibility is required when it comes to operating modes, the configuration of the drive train and thus the control of optionally integrated clutches, intermediate gearboxes, hydraulic units and frequency converters.

A good example of such a complex vessel is the Vanadis. The 31m ­long motor­yacht, which is equipped with azimuth twin propeller systems, is powered by a hybrid drive system consisting of traditional diesel engine and electric motor. The latter is fully integrated, with the rotor making up part of the shaft line. This means that it can be used for propulsion as well as for producing electricity in generator operation. By knowing the hydrodynamic properties of the fixed pitch twin propeller system, the available difference between the power reserve of the diesel engine and the propeller load can be used optimally.

In hybrid drive trains the efficient mapping of complex closed ­loop control systems is required. Both prime movers act mechanically coupled on the same drive train, either sequentially or simultaneously. Depending on the objective – optimized fuel consumption or lowest possible noise emissions – either the electric motor or the combustion engine can be used for propulsion at different operating points. For combined operation, the speed and torque of both propulsion units must be coordinated.

In the process, both the load distribution and the leading system change over the propeller curve. Frequency converters and engine control units must also be coordinated to cover the power and torque requirements of the propeller without adversely affecting each other. For other applications, such as those on workboats, additional functions can be integrated into the control system as functional modules, e.g., the operation of fire-fighting pumps via the diesel engines with simultaneous fully electric propulsion. In the case of controllable pitch propellers, hydrodynamically optimized operation modes can also be implemented. The independent control of propeller speed and pitch (combinatory mode) enables an extremely efficient and low­wear operating state at any operating point.

This variance requires the hardware to be compatible with many communication protocols. Therefore the control system must be designed to allow parametrization, with the aim of optimally mapping its design for the respective vessel. At the same time, system reliability is a prerequisite for safe ship operation. The failure of the propulsion system or the manoeuvring units could be fatal in many situations. To prevent the propulsion control system from breaking down due to a single failure, classification societies require that propulsion units must be supported by a backup system. 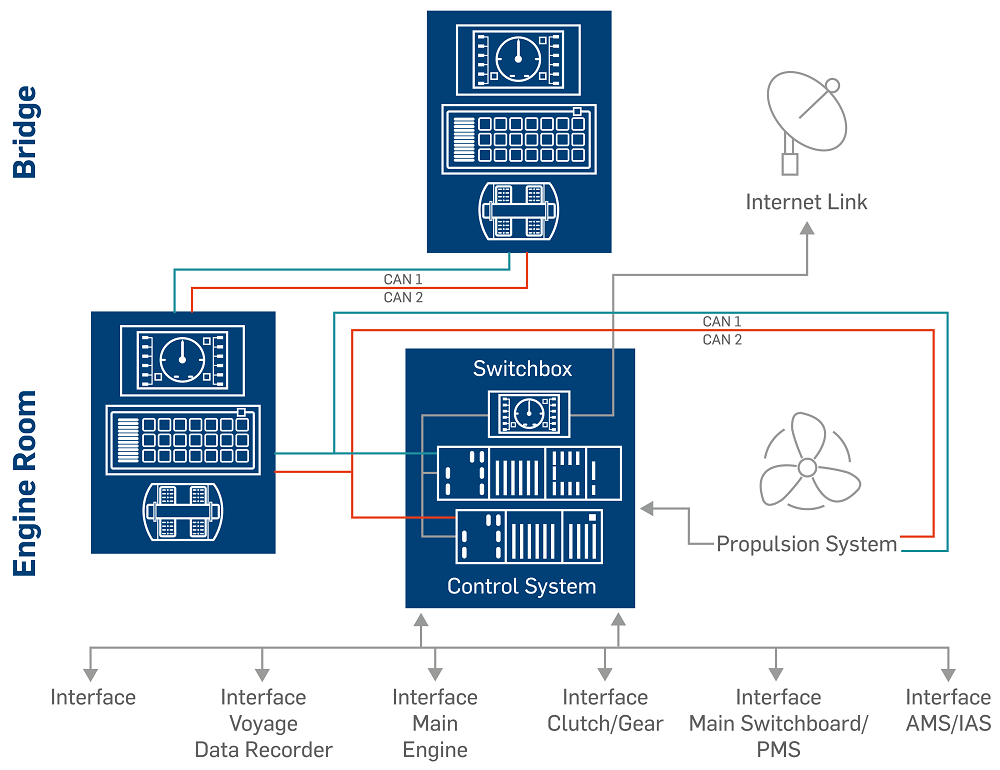 In the past, this was traditionally resolved by means of direct valve or actuator control (NFU – non-­follow­-up control mode). A modern propulsion control system should have a fully redundant design, meaning that the control of the setpoint values implemented in the main controller is also available in the backup controller (FFU – full follow-­up control mode). In addition, a smooth transfer between the systems is required.

Modular software architecture is the core of the propulsion control system. This allows for maximum adaptability and versatility when it comes to incorporating the large number of components to be integrated, while also fulfilling complex requirements for real-time capability, redundancy and cyber security.

In a specific instance, this is supported by a redundant arrangement of the hardware modules. For example, the programmable logic controller (PLC), the core element of the system, is provided in duplicate. As a rule, both computing units perform the tasks assigned to them. If a failure occurs, the remaining active system automatically takes over the vital functions of the faulty one. Equally important is the errorfree functioning of the executed software itself. To ensure this, a reliable software development process is needed including extensive testing.

This testing requires a high degree of standardization, but the need for flexibility described above creates an apparent contradiction. To address this, the system features a highly modularized design. In the past, this modular concept was achieved by combining individual decentralized microcontroller modules equipped with hardware-related software. These modules each carry out an individually assigned function.

With increasing computing power, it is now possible to set up all of these tasks on the central processing unit (CPU) and to provide flexibility by means of modular software architecture and multi-tasking. The modules themselves are highly standardized but can be combined as required by their systematically structured interfaces in terms of input and output parameters.

In addition to increasing the software quality by repeating function modules, this design also reduces the number of installed components. This results in a lower probability of failure and a lower risk of error. Central input/output (I/O) management can potentially reduce the manufacturing activities involved in constructing switch cabinets. It also reduces maintenance requirements in the future.

The component manager framework is used during development of the modular software. Applications, such as alarm and monitoring or power management, are implemented as individual components with a defined input and output interface. The firmware, which provides the basis, can be easily extended by a wide range of system functions. The interconnection of the software modules is carried out automatically via script, with assignment by means of a predefined naming scheme.

Flexible configuration means that systems can be adapted for a wide range of applications from a tug to a mega-yacht to a floating production storage and offloading (FPSO) unit. These systems communicate via a global variable service. By separating them into independent components, a high degree of testability and reusability is achieved. Since the individual modules are already available in compiled and tested form, the entire application can be put together purely by configuration and can be extended easily at a later stage.

To meet the requirements of continuous delivery, e.g., techniques that improve the software delivery process, complete customized applications can also be automatically generated on a build server from the latest source code versions of the individual components. Used as hardware, the automation system M1 simplifies software compatibility between different central processing units (CPUs). The interfaces and communication protocols meet all current standards in the shipbuilding industry.

Various function modules enable a wide range of applications such as condition monitoring or power management to be implemented either as stand-alone solution or integrated into the control system. For example, a module for capturing high frequency signals in condition monitoring systems is provided with the AIC206/214 assemblies. A universal module (GIO212) covers the most important types of signals required to measure pressure, speed and temperature.

This makes it possible to introduce a future-oriented, data-based lifecycle management system, especially for smaller units such as tugs, workboats and ferries. Combining the capture, processing, transmission and interpretation of data generated during operation opens up new opportunities.

By using additional sensors for temperature, acceleration and water content on propulsion units, for example, the condition of systems can be continuously monitored. Making use of suitable analytical methods, wear behaviour can be observed with appropriate action taken. In contrast to the collection of operating and status data, this requires extended measures on board.

The high-resolution sampling rates, especially of the acceleration sensors, would place too great a strain on the capacity and data volume of the internet connection. Consequently, data is post-processed directly at the source. The measured signal – a broadband oscillation – is mathematically divided into individual frequency ranges and spatial directions. This allows a statement to be made at component level of the drive train. A further advantage of post-processing on board is the direct availability of the information to the crew, even in offline operation.

The corresponding computing operation together with signal data processing takes place either in parallel on the CPU or on a stand-alone system. The latter is designed in the form of an independent switch cabinet with a high-performance human-machine interface (HMI). This allows condition monitoring systems and IoT gateways to be installed as retrofits on existing vessels.

The availability of operating data (e.g., ship movement and environmental conditions) in combination with simultaneous propulsion unit data (e.g., propeller speed, pitch, azimuth angle) enables detailed monitoring of ship operations. It provides the basis for a better understanding of how a vessel is used and for discovering, implementing and ultimately even quantifying the potential for increasing efficiency. Key figures on fuel consumption, speed, propulsion unit manoeuvres or environmental influences can be displayed and viewed immediately in an online portal.

To meet the highest security standards, the system architecture has been developed using the security by design principle and divided into different zones. Due to the segmentation of the networks, access is only permitted from the inner secure zone to the outer generally less-secure zone. Access in the other direction is not possible. This guarantees that even though the PLC can receive information, there is no direct access to the PLC from outside. The individual zones are separated from each other by a hardware firewall.

Another central security aspect is the HMI. With a specially hardened operating system (Linux Yocto), this forms the central element between PLC and web-based applications. All communication between data collecting and data evaluating systems takes place via the HMI. By means of authorized access, this HMI provides the interface for users on board the vessel.

Communication between the individual participants takes place using the IoT standard protocol MQTT. Data communication to the cloud service is based on the AMQP standard. In the case of file transfer, security is additionally enhanced by certificate-based signing by participants. In addition, AES-256 encryption of data is used for internet communication. Local storage (ring buffer) prevents data loss, even if the internet connection fails.

The demands on modern control systems are extremely diverse: for example, they must be able to support hybrid propulsion systems, offer maximum reliability, be internet-ready, be as flexible and economical as possible, and also be upgradable in existing vessels. Together with accelerating digitalization in the maritime industry, this opens up great potential. Systems designed to the latest industry interface standards can accommodate a wide range of requirements in relation to the connection of various subsystems. Accordingly, this allows for economic, efficient and environmentally friendly operation of the propulsion system.