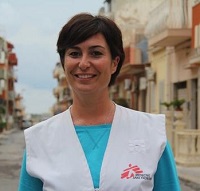 At sea, on the Bourbon Argos, Doctors Without Borders (MSF) is providing psychological first aid to people during and after rescue operations. Psychologist Aurelia Barbieri, an Italian MSF psychologist, is currently working in Italy with those that have been rescued while attempting to cross the Mediterranean from Libya to Europe.

What condition do people arrive in after surviving a shipwreck?

They are devastated. They have had a long and dangerous journey from their countries of origin, and they are marked by their time in Libya, where many of them were treated with inconceivable cruelty.

And if, on top of this, they have experienced a shipwreck, maybe even losing a family member, then their suffering is huge. There are children who arrive by themselves because they lost their parents in a shipwreck, and there are parents who lost their children.

Safely on land, what do shipwreck survivors most need?

The most important thing is to give them a safe and humane reception. You start with the most basic things: water, food, showing them where the toilets are. They need to feel that someone is taking care of them.

As psychologists and cultural mediators, we form a bridge between the survivors and the medical teams. The survivors need to be made welcome, to be given a cup of tea, a smile, to find someone who will take care of them and listen to them. When they arrive, it is frantic and the authorities are rushing to put official procedures in place. Our contribution is limited, it doesn’t have a long-term impact, but it can make a big difference for them. It’s about feeling close to other human beings.

What requests do shipwreck survivors have?

They often ask for the opportunity to call home, to tell their family that they are alive. Soon after a shipwreck, not everyone is ready to say that they have lost someone in the sea. They often ask for news of the person who they can no longer find. They will ask us: “Is my child dead?” Later they will have to face one of the toughest moments: identifying the bodies of those who drowned.

Which survivors’ stories have made the greatest impression on you?

There was an Eritrean woman in her late twenties who was seven months pregnant, and who had lost her child of seven or eight. After the shipwreck, the woman was in the water for four or five hours. In front of me, she phoned her mother, but was unable to say anything about the tragedy. All she said was that she was safe and had arrived in Italy. It had been a long time since she had spoken with her mother; she just wanted to hear her voice. Even the silences and omissions count.

We often use maps or drawings when we talk with the survivors. I drew a boot to represent Italy, and the Eritrean woman said to me, smiling: “I studied it at school!” Before leaving her homeland, she had checked on a map the shortest point to cross the sea. She will carry a huge weight with her for the rest of her life, as after all the efforts put into this trip, her child drowned.

What else travels through the phone lines between Europe and Africa?

A few days ago, I met a Sudanese man who had left his country with his pregnant wife. He was desperate as he had arrived in Italy alone. He was drying some photos he had brought with him on the journey. He called home and I heard him saying alhamdulallah (thanks be to Allah) while speaking with his wife's sister.

His wife had called her to say that she had arrived in Italy. She survived. He could hardly believe it: for several hours he had suffered the tragedy of her possible loss. At the end of the call there was an explosion of tears and joy – by him, but also by us!

The other survivors of the shipwreck told me that he had helped a lot of other people at sea. His help had been rewarded somehow. Stories like this give the survivors – and also give us – the energy to keep going. It’s the power of hope.

Is it possible to get accurate figures for how many people drown in a shipwreck?

It’s very difficult to get accurate numbers. All the available information is collected from the survivors. One of our jobs is to make people understand that it is important to say if they have lost someone, to give all the details, but they are in a state of great confusion. You can try to give figures, but they are estimates, and nothing is certain.

However, when one after the other the people we meet tell us, “I lost my sister,” “I lost my cousin”, or when a group of friends tells us that 19 of them left, but only nine arrived – all of this can make the volume of a tragedy understandable.

What concerns you most?

I am afraid that the sense of humanity – the sense of proportion – could be lost. I fear that people watching these events from a distance could get used to them, as if they were watching a movie. There is the risk that tragedies like these will become normal. But the reality is that each shipwreck is a terrible tragedy. Whether there are hundreds of deaths, tens of deaths, or just one, all these victims are people who have been forced to cross the sea because there are no safe alternatives. I cannot accept that children or adults can die like this. I cannot accept it. Never.

In Italy, MSF mobile teams are working in Sicily and in Southern regions’ ports, at critical landings related to shipwrecks and incidents at sea, to support psychologically and give first assistance to people who survived such traumatic events. A mobile team composed of a psychologist and specially trained cultural mediators is deployed within maximum 72 hours after the alert given by the Italian authorities.

At sea, on the Bourbon Argos, MSF is providing Psychological First Aid at people during and after rescue operations. Between the end of April and the end of May 2016, six operations have been conducted, most of them related to last days shipwrecks, including 16 individual sessions and several emotional group debriefings.