Jack Cullen, Nazi Spies and the Founding of the USCG Beach Patrol

The accolades above recognize John C. Cullen, one of the first and only enlisted men to receive the Legion of Merit Medal during World War II. In 1942, he became the first American to encounter a foreign enemy on U.S. soil since the War of 1812.

John Cornelius “Jack” Cullen was born and raised in Bayside, Long Island. At age 21, he enlisted in the Coast Guard shortly after the Japanese attack on Pearl Harbor in December 1941. After basic training, he was assigned to the Coast Guard station at Amagansett, Long Island. In June 1942, Cullen had an encounter that changed his life and altered the course of the war at home.

At midnight, on Saturday, June 13, Cullen started out from the station on his beach patrol alone and armed with only a flashlight and a flare gun. His easterly walk would normally take him three miles toward the uninhabited tip of Long Island. Twenty minutes into his walk, barely 300 yards from the station, Cullen came upon a man clad in civilian clothes standing on the beach in the fog. As he approached the stranger, Cullen noticed two others in bathing suits standing knee deep in the surf.

Cullen called to the man, “What’s the trouble?”

All three men turned toward him, but remained silent.

He called out again, “Who are you?”

The man in clothes advanced toward Cullen, who instinctively reached for the flashlight in his pocket.

Seeing Cullen reach for his hip, the man shouted over the surf, “Wait a minute. Are you Coast Guard?”

With a slight accent, the stranger said, “We’re fishermen from Southampton and our boat’s run aground.”

“Come up to the station and wait for daybreak.”

The man responded, “Wait a minute—you don’t know what’s going on. How old are you? Have you a father and mother? I wouldn’t want to kill you.”

A fourth man waded out of the surf dragging a heavy canvas bag. Unaware of Cullen, he started speaking to the others in German.

Cullen sensed something was going on. “What’s in the bag?”

Cullen knew no clams were found in the area, but said nothing.

“Why don’t you forget the whole thing? Here’s some money—one hundred dollars.”

The man took out more bills. “Then take three hundred.”

Cullen thought it best to play along with the stranger’s offer. “Okay.”

Cullen braced himself fearing the man might try to hypnotize him.

“Would you recognize me if you saw me again?”

“Would you recognize me if you saw me?”

These were the last words exchanged between Cullen and George Dasch, leader of a team of Nazi saboteurs landed by U-boat at midnight that evening in June. After parting company, Dasch was satisfied that Cullen would not disclose the encounter to others. He allowed Cullen to walk free into the night fog. Departing the scene, Cullen could not believe his luck. In an interview, he recounted that he “. . . backed-up most of the way. I didn’t trust them. I didn’t think I was going to get out of there.” He later remembered, “I went up the sand dunes, and I ran like hell for the station!” 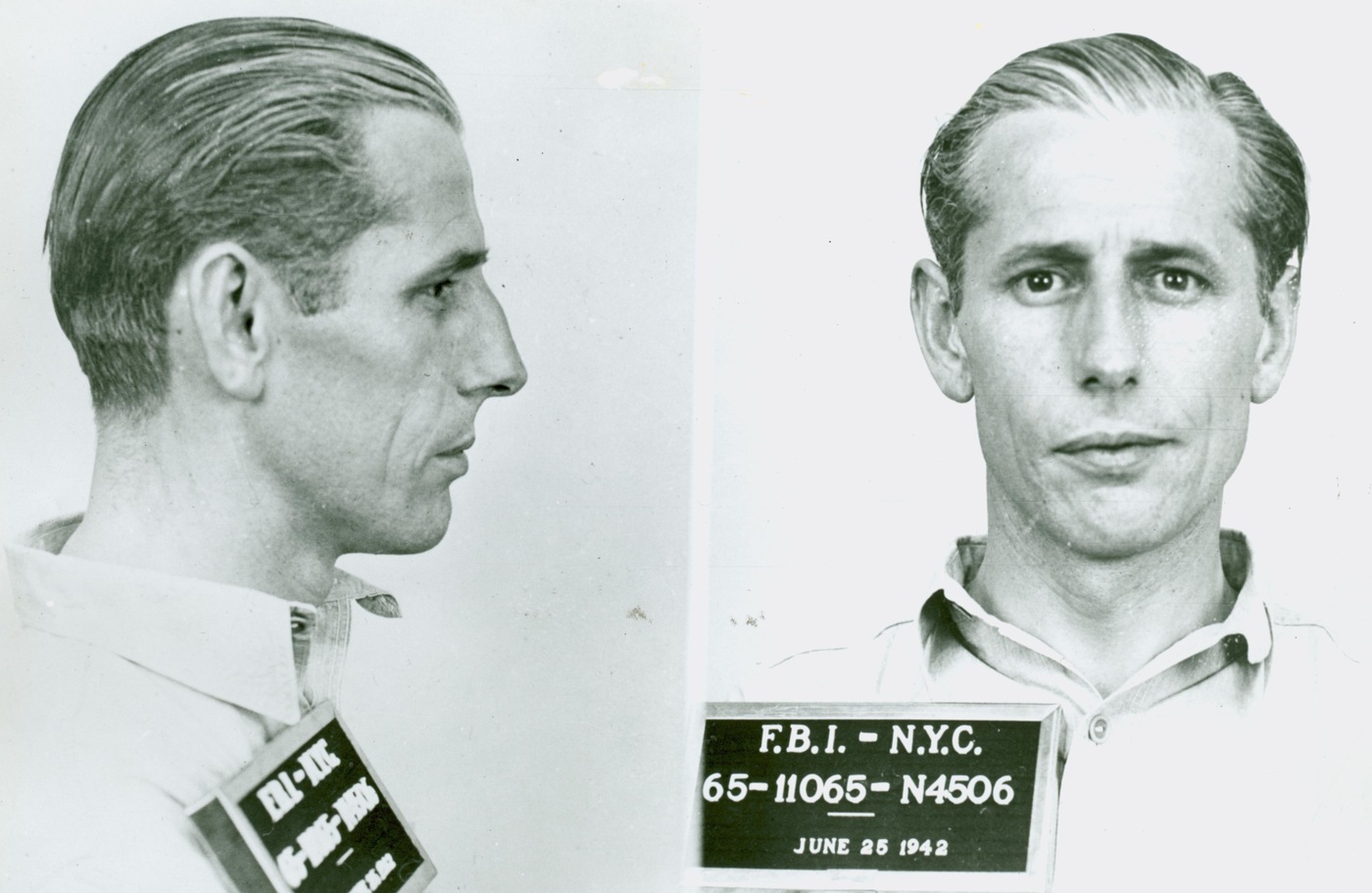 After he made it to the station, Cullen told the officer-in-charge, Boatswain’s Mate 2nd Class Carl Jenette, what had happened and showed him the wad of bills. Jenette was shocked and responded, “Oh boy, this is big.” He immediately called the station commander and the local Coast Guard command. Jenette continued, “We’ll break-out some rifles. You don’t have to come back, but if you want to go.” Cullen replied, “I’ll go.” Jenette armed the men with .30 caliber rifles then Cullen led them to the location of the encounter.

By the time the Coast Guardsmen arrived at the scene, the Germans had departed. Cullen and his station-mates began searching the beach and the adjacent dunes for any evidence of the enemy landing. Meanwhile, they could hear the U-boat and smell diesel fumes as it freed itself from the sandy shallows offshore. At 2:00 am, a local Army unit of 20 men joined them to assist in the search. By daybreak, the search party dug-up discarded German cigarettes, uniforms and swimsuits, and four wooden boxes containing explosives, false identity papers, several thousand dollars in cash, and more equipment.

The Nazi team’s mission? To destroy U.S. infrastructure along the East Coast and cripple the American war effort at home. Codenamed “Operation Pastorius,” the team’s targets included aluminum factories, hydroelectric plants, automobile and railroad bridges, water reservoirs, canals and lock systems. The men were saboteurs donning no uniforms or identification as enemy soldiers. They were the first foreign combatants to step foot on U.S. soil in 130 years.

The day after the landing, Cullen became the subject of interrogations by the Federal Bureau of Investigation (FBI). He later recounted, “I was afraid the FBI thought I was somehow connected with the landing.” He continued, “Under ordinary circumstances, I should have been dead. They couldn’t understand why I hadn’t been killed . . . neither could I!”

With Cullen’s eyewitness account and his identification of George Dasch’s photograph, the FBI undertook a nation-wide manhunt. Within two weeks, agents had apprehended Dasch and his team and a second four-man team that landed near Jacksonville, Florida. A military tribunal tried the Nazis and their sentencing was kept secret from the public. Of the eight Germans, six were electrocuted and buried in unmarked graves in Washington, D.C. Dasch and another cooperative saboteur were granted lengthy sentences for providing information and evidence about the operation and their fellow Nazis.

Shortly after these landings, the FBI recommended establishing an armed beach patrol system. A month later, in July 1942, the Coast Guard officially instituted the Beach Patrol, an armed coastal force serving out of Coast Guard bases and stations. This system covered the East Coast, Gulf Coast and West Coast and grew in sophistication over time. Beach Patrol personnel were armed with sidearms, rifles and automatic weapons with some teams employing canines. Others were mounted on horseback and still others used jeeps and trucks as part of their regular patrols.

Jack Cullen received the Legion of Merit Medal for his role in detecting and identifying Dasch and his team. He was the first, and one of the only, enlisted men to receive the medal during World War II. The Service also advanced Cullen from Seaman Recruit to Boatswain’s Mate 2nd Class and he participated in War Bond drives as one of the Coast Guard’s enlisted heroes. After the war, George Dasch and the other surviving saboteur were granted clemency and returned home to a divided Germany devastated by years of death and destruction.

Cullen left the Service in 1946 as a Boatswain’s Mate 1st Class and began a career in Long Island’s local dairy industry. He later had regrets about leaving the Coast Guard rather than staying-in and advancing into senior enlisted ranks. He was one of the many Coast Guard heroes of World War II and the long blue line.

William Thiesen is the U.S. Coast Guard Atlantic Area historian. This article appears courtesy of Coast Guard Compass and may be found in its original form here.