On October 12, the crew of the guided-missile destroyer USS Cole (DDG 67), along with their families and guests, gathered together at Naval Station Norfolk to commemorate the 17th anniversary of the ship's bombing with a wreath-laying and a "Roll Call of Heroes.”

The remembrance ceremony honored and celebrated the 17 shipmates who perished in the attack, as well as the resolve and warfighting attitude the "Mighty Cole" continues to embrace.

On this day in 2000, Cole stopped briefly for refueling in the port of Aden, Yemen. At approximately 11:18 a.m., unknown to Cole security, a small boat with terrorists aboard came alongside the ship. Suddenly, a highly explosive bomb detonated alongside Cole. The explosion was so massive that it left a 40-by-60 foot hole in the port side of the ship, taking the lives of 17 sailors and injuring 39 others. Cole's sailors courageously fought fires and flooding for the following 96 hours to keep the ship afloat. 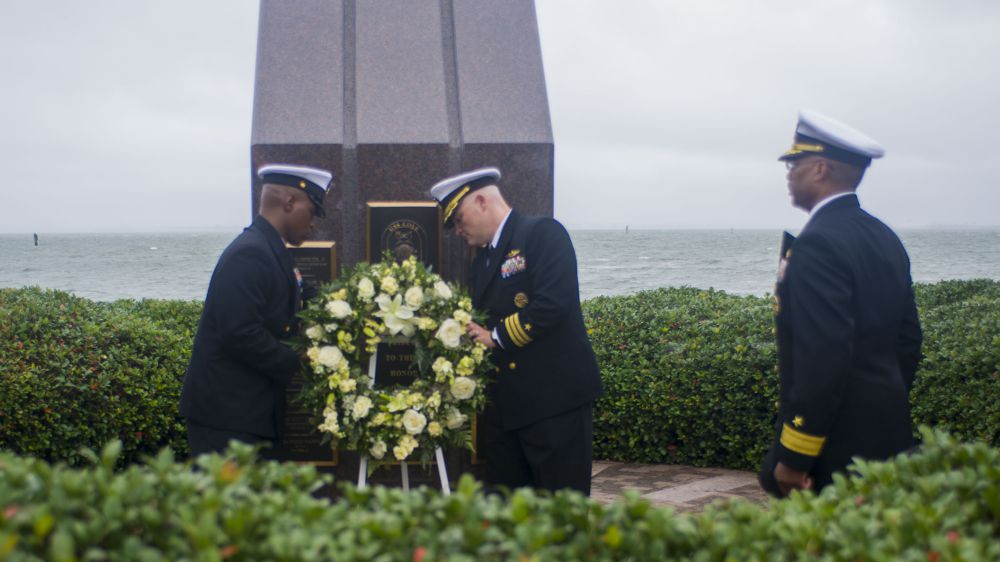 Commander, Naval Surface Force Atlantic Rear Adm. Jesse A. Wilson Jr., provided the keynote address. "The memories of that day are unforgettable...as we pause to honor our lost shipmates and celebrate the lives they lived, let us also remember who they were. They were parents, sons, daughters, uncles, aunts, cousins and friends. They were United States Navy Sailors, forward deployed, who volunteered to serve our nation and defend our freedoms when they were attacked," said Wilson. "It is that service and their sacrifice, that we honor here today."

"Cole is a very special ship, we serve every day in honor of our predecessors who made the ultimate sacrifice for our nation," added the Cole's Commanding Officer, Cmdr. David P. Wroe. "On this day, we take a moment to briefly reflect on the Sailors who valiantly fought to save Cole. Their sacrifices will forever be honored."

This article appears courtesy of Navy Live and may be found in its original form here.