Electric utilities of many nations operate hydroelectric energy storage batteries that are recharged overnight by pumping potable water uphill and then delivering peak-hour daytime electric power. Drought and increasing populations in many nations increases the attractiveness of using seawater to store energy.

About 20-years ago, Egypt proposed the development of a pumped hydroelectric energy storage installation next to the Gulf of Suez and intended to pump seawater into a reservoir located high in a coastal mountain, Jebel Galala. An environmental assessment suggested minimal harm to the desert environment in the region. The choice of a seawater-based, pumped energy storage system bypassed problems associated with using potable water to store energy. Several nations have endured and are presently enduring prolonged periods of drought, requiring that all available potable water be made available for human consumption.

Using seawater to store massive amounts of energy would have to be based on several precedents, some of which involve storing energy using potable water while other precedents involve the construction industry. During the later 19th century, British engineer Isambard K. Brunel proposed to develop a railway line under the Thames River, a concept that eventually proved successful. Railway tunnels were developed under rivers that flowed through several cities internationally, with a railway line being built under an oceanic channel in New York City. Railway and roadway tunnels link Japan’s island provinces.

During the latter 19th century, mining tunnels were even dug under the seabed at Land’s End in the U.K. 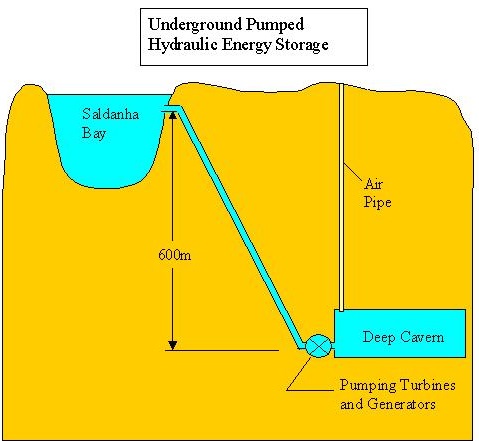 Environmentalists oppose traditional pumped storage that involves developing large reservoirs in mountain valleys. The precedent of undersea transportation tunnels, undersea mining tunnels and the conversion of an abandoned mine to underground pumped storage provide the basis to develop coastal seawater pumped energy storage installations. A quiet bay or inlet with zero to minimal silt movement on the seafloor would serve as a desired location for such an installation. Several such locations are available internationally at or near large cities as well as near major transportation hubs such as maritime terminals, coastal airports and extensive electric commuter railway networks.

One German make of hydraulic turbines offers a pumping turbine capable of pumping water uphill over 600-meter or 2,000-foot elevation, while many small inlets have a water depth of less than 100 meters or 330 feet. There may be scope near many large coastal cities, to excavate water storage tunnels in the ocean bedrock at depths of 600 meters below sea level, below a bay or inlet. An extended circular tunnel could provide an energy storage capacity of 10-hours at 2,000-megawatts, sufficient to assist in providing peak hour morning and afternoon demand for electric power.

At Toronto, Canada, the municipal power utility operates a compressed air energy storage installation based on mega-size inflatable plastic bags located at 800-foot depth on the floor of Lake Ontario. During the overnight hours, the bags are pumped with air and the heat-of-compression (500 degrees C) transferred into thermal storage. During peak periods, air flows from the bags through a pre-heater before driving turbine engines that generate electric power.

Coastal cities such as Chennai, India, have a deep seafloor of over 1,000 meters or over 3,300 feet depth located very close to the coast, where installation of inflatable plastic bags may be possible.

While higher pressure at greater water depth increases energy storage capacity, the heat-of-compression would rise to over 900 degrees C. Cities that have a coastal mountain could excavate a cavern below sea level under the mountain, where upper level air bags would be connected to seep undersea air bags. With constant pressure in both upper level and lower lever level air bags, hydroelectric pumping of seawater into the cavern would displace air from upper level to lower level air bags while producing minimal heat. A hybrid pumped hydro and compressed air energy storage system could be a future option.

Environmentalists have successfully opposed traditional pumped hydroelectric energy storage projects on the basis that such projects destroy mountain valleys. Pumped underground storage using seawater bypasses that hurdle and can operate independently of drought. Compressed air energy storage involving inflatable bags installed at great depths under the sea offers promise, the heat-of-compression of air presents a problem. It appears possible to use compressed air inside air bags secured from deep under the sea to exert pressure on water inside a cave excavated under a coastal mountain. A hybrid compressed air over hydraulic energy system appears possible.