On April 30, 1798, President John Adams signed a congressional act establishing the Department of the Navy.  On this 221st anniversary the U.S-flag Jones Act dredging industry stands with the Navy as proud stewards of our nation’s strategic ports and remains committed to maintaining their channels and points of access at all times.

Strategic ports are U.S. ports that are designated by the Department of Defense (DoD) to support major force deployments during national defense emergencies. These ports include naval bases such as Norfolk Naval Station in Virginia; and ammunition supply ports such as the Military Ocean Terminal at Sunny Point, North Carolina, the Concord Naval Weapons Station in California, and the Naval Magazine Indian Island in Port Hadlock, Washington.

The Strategic Seaport Program (SSP) is designed to ensure America has the seaport capacity necessary to effectively handle any contingency affecting national security. It provides America's armed forces with a reserve seaport capacity to handle any sudden, large increases in the need to move military assets during a national emergency or surge deployment. This is accomplished by identifying and selecting seaports, whether military or commercial, that best fit the nation's long-term needs and then readying these seaports in the event that they need to be utilized.

Ports in Philadelphia, PA, Charleston, South Carolina, Jacksonville, Florida and Beaumont, Texas play major logistics roles, loading cargo to supply American troops in war zones. These have been the top four ports for supplying our troops with ocean-borne cargo over the past fifteen years. 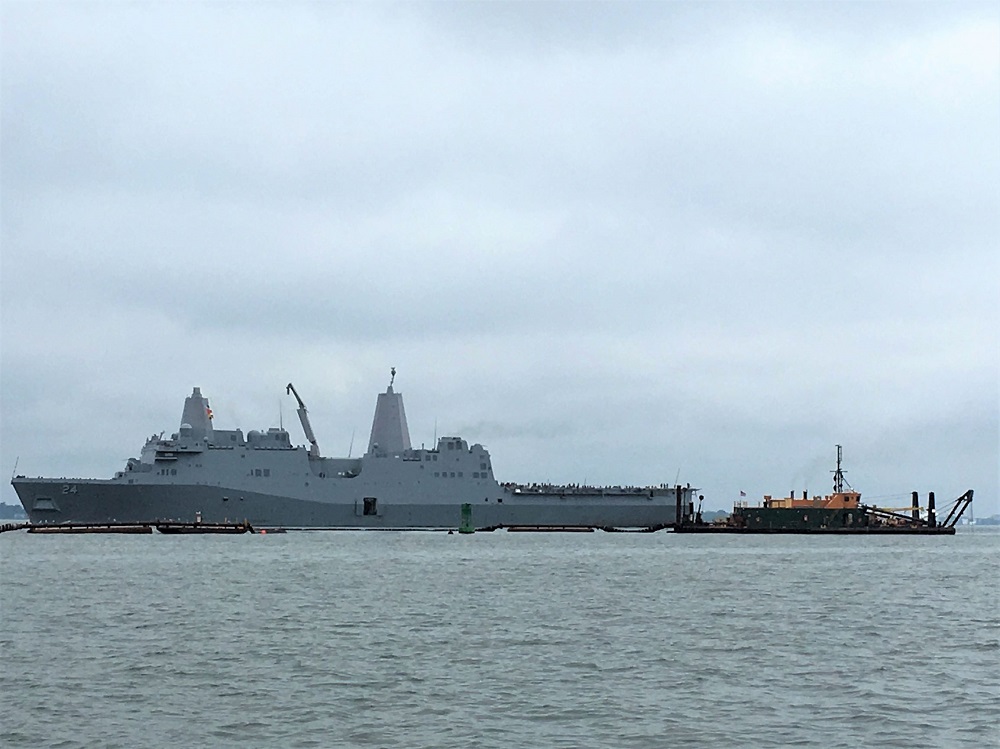 American dredge at work in a strategic harbor

Just this past year, U.S. Jones Act dredging companies maintained, deepened or widened strategic seaports around the nation.  Great Lakes Dredge & Dock Company (GLDD) is nearly finished with the Delaware River Deepening Project that will allow neo/post-Panamax vessels to visit the Port of Philadelphia.  During the aftermath of Hurricane Harvey in 2017, Colonel Lars Zetterstrom, commander of the Galveston District of the Army Corps of Engineers said, “We’ve never seen this amount of active survey vessels or dredges working in the Texas navigation channels at one time.” Callan Marine of Galveston, Texas was one of the first dredging companies onsite to help with the emergency. The channels and harbors in Charleston, South Carolina and Jacksonville, Florida are continuously being maintained. They are also in the latter stages of widening and deepening projects.  The dredging companies involved in Florida and South Carolina include Weeks Marine, Dutra Group, Manson Construction Co., GLDD, and Cashman Dredging and Marine Contracting. Cottrell Contracting is one of the predominant dredging companies maintaining channel access for sensitive naval air stations such as Norfolk Harbor in Virginia.

The U.S.-flag dredging industry is part of the more than 40,000 American vessels built in American shipyards, staffed by American mariners, and owned by American companies that operate 24/7/365 in our domestic waters. The US-flag maritime industry sustains nearly 650,000 American jobs and generates $41 billion in labor compensation, over $16 billion in taxes, and more than $150 billion in annual economic output.

The Honorable William P. Doyle is the CEO and executive director of the Dredging Contractors of America. He previously served two terms as a commissioner on the U.S. Federal Maritime Commission, where he made sure that the Jones Act was protected and that foreign ocean carriers did not exert their collective market power over U.S. service providers.