In 2004, two US Navy personnel and one member of the Coast Guard were killed in a blast while attempting to board a boat near the Khawr Al Amaya oil terminal off Basra. Two other explosive-laden watercraft detonated nearby, though they did not cause any casualties. The attacks were later claimed by Abu Musab al-Zarqawi, the leader of Al-Qaeda in Iraq (AQI) at the time and the founding father of the Islamic State (IS) movement.

Notably, the statement drew a comparison to the 2000 USS Cole bombing in Yemen, demonstrating AQI’s historical knowledge of jihadi attacks by sea and their strategic consciousness about the insurgent opportunities inherent to the maritime domain. Additionally, the statement threatened a continuance of attacks by sea, land, and air “until victory or defeat.” AQI would make good on this promise the following year, firing rockets at the Jordanian port of Aqaba and Israeli port of Eilat.

These maritime attacks were also bolstered by AQI’s river-based movements and knowledge. The historian Kimberly Kagan describes how, during the 2007 surge, AQI (then called Islamic State in Iraq) “operated almost freely in a pendulum-like arc south of Baghdad, swinging from the Euphrates to the Tigris,” adding that “they traveled southeast along the Euphrates River, often by boat, from Fallujah to Sadr al Yusufiya.”

This mode of maritime activity by IS’s organizational predecessor would continue and ultimately expand under the Islamic State. IS has proven highly adaptable and, accordingly, has sought to use geography to its advantage. In the case of Iraq and Syria, the networks have long operated along the coasts and throughout the region’s river systems. IS has traditionally exploited the maritime domain for its kinetic operations, for propaganda purposes, and, in some cases, to raise funds. To be sure, the IS movement is a primarily land-centric phenomenon, yet the propensity for maritime operations is deeply ingrained into its organizational DNA. 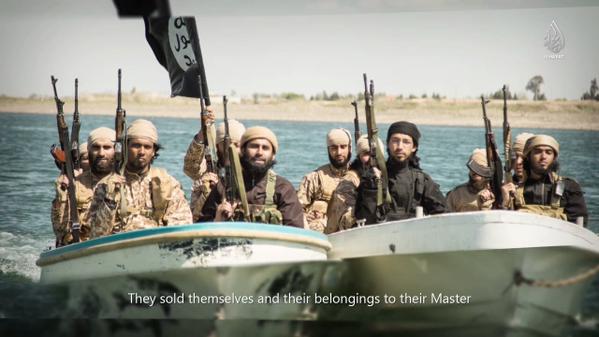 A screenshot portrays a group of IS fighters (Credit: Terrormonitor.com)

The Islamic State has historically been quite active along the Euphrates and Tigris, traversing throughout to move fighters, weapons, explosives, and supplies; conduct reconnaissance; prepare for and launch attacks; and strike using gunboats and boat-borne IEDs. The rivers have allowed IS fighters to avoid roads, checkpoints, and bridges. In fact, IS has even blown up such structures, including a bridge connecting Dhulueya and Balad using explosive-laden watercraft.

The Islamic State’s use of river systems was so prevalent during its high period that anti-coalition forces conducted intense airstrikes against jihadis travelling by boat. One report from 2016 stated the US and its allies had sunk over 100 IS boats up to that point, with 65 of them destroyed in a single month. The group has used barges, motorboats, and rowboats to travel around the area.

The Islamic State’s military strategy includes a significant media warfare component, and some part of this has been leveraged to weaponize the maritime domain. The Islamic State movement was early to recognize the US Navy as central to American power projection, with IS spokesman Abu Muhammad al-Adnani boasting that “Allah’s law” is “being implemented despite” the opposing military coalition’s “legions, arsenals, planes, tanks, missiles, aircraft carriers, and weapons of mass destruction.”

Further solidifying this weaponization of the maritime domain, another IS figure lamented in March 2015 that “today, Worshippers of the Cross and the infidels pollute our seas with their warships, boats, and aircraft carriers and gobble up our wealth and kill us from the sea.” The group’s supporters responded to this statement with optimism, saying IS will “take to the sea in what is only a matter of a short time,” forecasting the “creation of an Islamic fleet by the Islamic State,” and saying that an IS navy would aim to sink “warships and [commercial] ships… and to threaten their shores and lines of communication… an entire fleet, God willing, not just a single ship.”

For the Islamic State, the seas have also been viewed as a way to infiltrate the soft underbelly of Europe and to attack and invade its enemies in the West. One propagandist suggested that a Mediterranean maritime presence could “bring us closer to conquering Rome sooner rather than later.”

In a particularly notable video intended to show off the skills of its forces, fighters flaunted their amphibious capabilities by swimming in the Tigris and maneuvering in small boats.

Aside from threats, IS’s propaganda apparatus has produced photos and videos of militants paddling, fishing, selling their catches at local markets, and even scuba diving — such imagery was intended to show the serenity of life in the caliphate and the high spirits of the Islamic State’s rank and file. 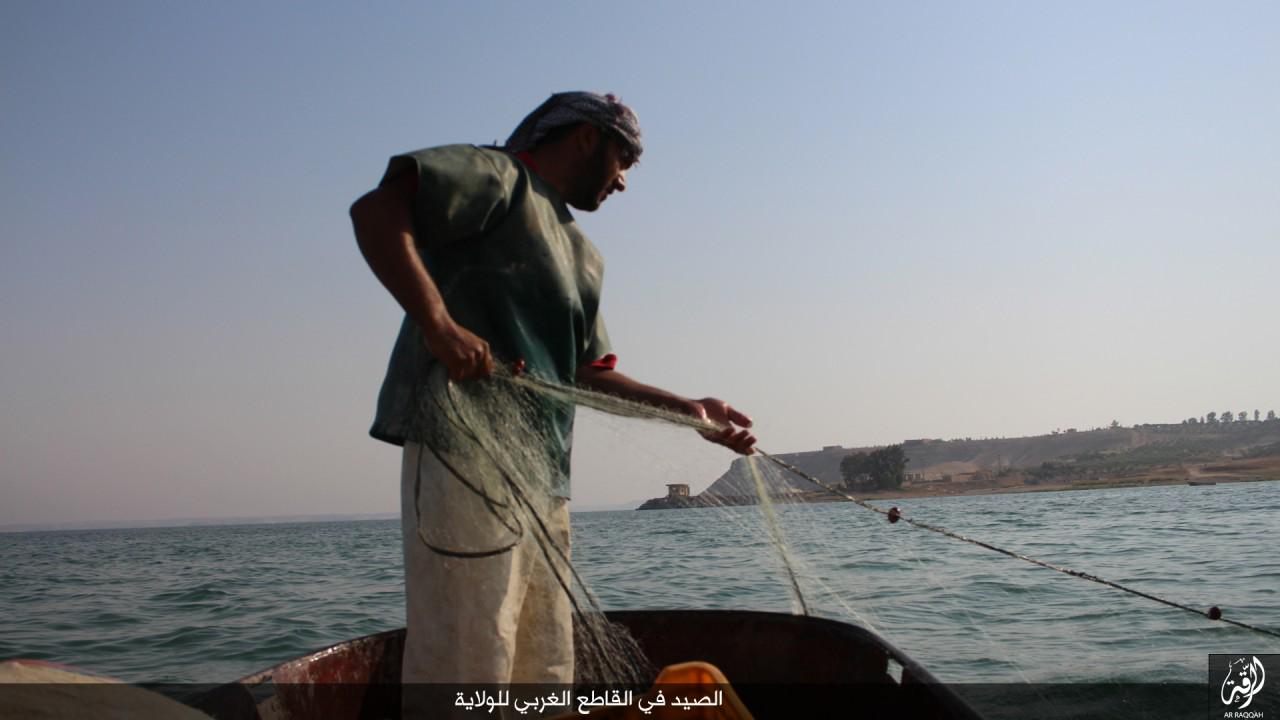 However, some of this activity served more practical purposes. As the Islamic State’s caliphate territory was rolled back by the US-led military coalition, the organization exploited the fishing industry as a source of funding. In 2016, Reuters reported about how the group turned to farming and selling fish in Iraq to finance their operations. It should be noted, though, that the Islamic State and its previous iterations had reportedly been involved in the industry since at least 2007 when AQI was fighting the Americans following their 2003 invasion. 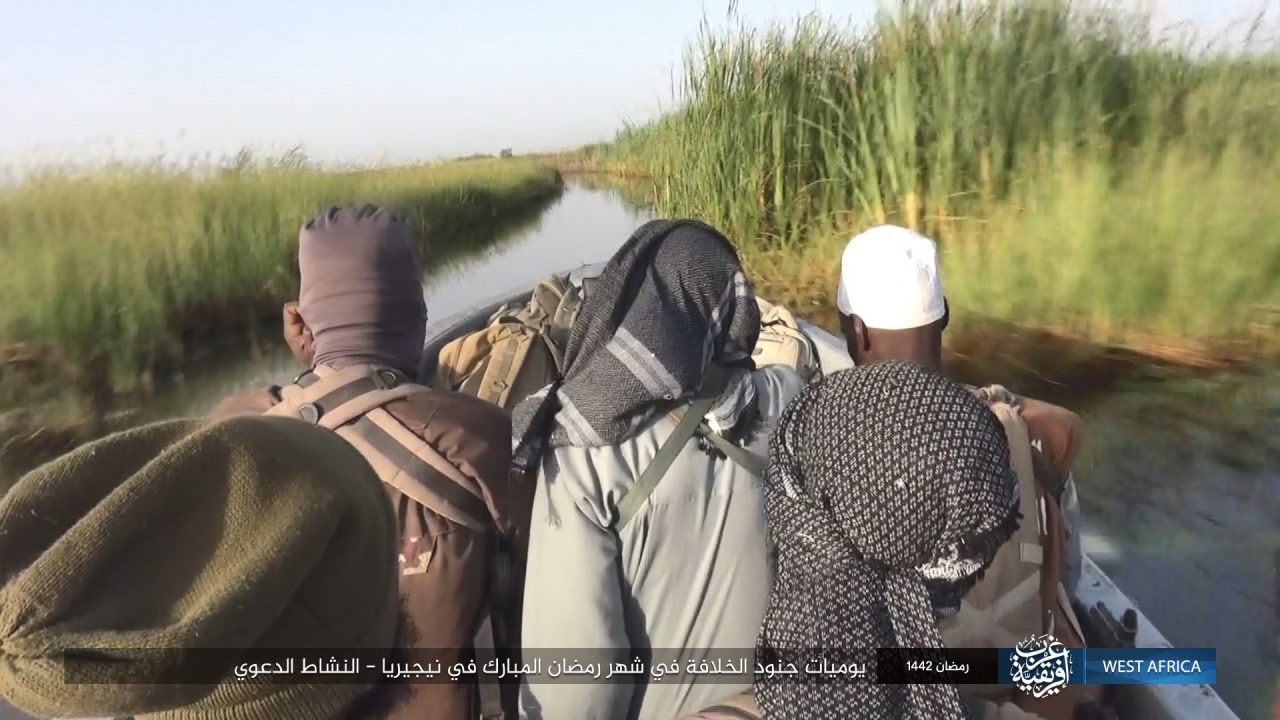 IS-associated militants on a boat in the Lake Chad region (credit: Evan Kohlmann)

Even with the loss of land control in Iraq and Syria, IS guerrillas continue to operate along the region’s river systems. And with the organization’s international expansion and the establishment of a global network of insurgent hubs, the group’s branches, from the Sulu-Celebes Sea to the Lake Chad Basin, are more actively incorporating maritime activities into their insurgency campaigns.

Lucas Webber is a researcher focused on geopolitics and violent non-state actors. He is cofounder editor at militantwire.com and writes a newsletter at sinosecurity.org.