The SS Great Britain was the creation of an expert team, engineers and shipbuilders and professional seamen led by Isambard Kingdom Brunel. Brunel was a visionary engineer who had already built the Great Western Railway. He was responsible for the ship’s final design, which was revolutionary.

Brunel carried out a series of calculations which showed the relationship between a ship’s capacity (the amount she can carry) and the energy needed to drive her through the water. These calculations showed that large ships need proportionally less energy than smaller ships to cover a given distance such as the Atlantic Ocean. Brunel worked out that the ship the size of the SS Great Britain (322 feet long, beam 50 feet) would be able to carry enough fuel to power her engines all the way from Bristol to New York.

However, it was impossible to construct this ship of timber, the traditional shipbuilding material. A wooden ship this size would need bulky internal supports, which would reduce the space for carrying fuel and paying cargo.

Brunel’s material was iron. There were few iron ships before the SS Great Britain and none that matched her astonishing size. However, Brunel was convinced that he could go further than these earlier examples of iron ships. His decision to build a huge iron ship transformed the technology of sea travel.

Brunel originally designed the SS Great Britain with huge paddle wheels, just like his earlier ship the Great Western. However, his idea changed when the Archimedes visited Bristol to demonstrate the efficiency of her new screw propeller.

Brunel quickly saw that the propeller had a big advantage over paddles - it would operate more efficiently in rough seas. Paddle wheels alternately dip into and rise out of the water as a ship rolls, and so it is hard to keep her on a straight course. A propeller is fixed low on the hull at the ship’s stern, so it stays submerged and continues to drive the ship forward even in rough conditions. Paddle wheels also become very inefficient as the consumption of coal on a long voyage lightened the ship so much that the paddles could barely reach down to the water.

Brunel researched this new invention very thoroughly until he found the most efficient design. He then managed to persuade the Great Western Steamship Company to replace the SS Great Britain’s paddles with a propeller. The future of shipping was changed forever.

The start of an amazing story

The story of Brunel and the SS Great Britain starts in Bristol at the Great Western Dockyard. This is where Brunel built his innovative new ship and where Prince Albert launched her in front of cheering crowds on a showery summer’s day, 19 July 1843.

One of the most important parts of the site was the huge stone factory (now rebuilt) on the south-east side, facing onto the road, where the new ship’s hugely powerful engine was built. The Great Western Dockyard was the first place in the world where all the processes associated with modern iron shipbuilding came together on one site.

It took four years to build the SS Great Britain and then another 18 months to get her out of Bristol, for Brunel’s plan had made her too big to fit easily through the lock at the entrance to the Floating Harbour. The ship’s owners had to persuade the harbor authorities to temporarily dismantle the lock gates, so that the SS Great Britain could squeeze through on a high spring tide. 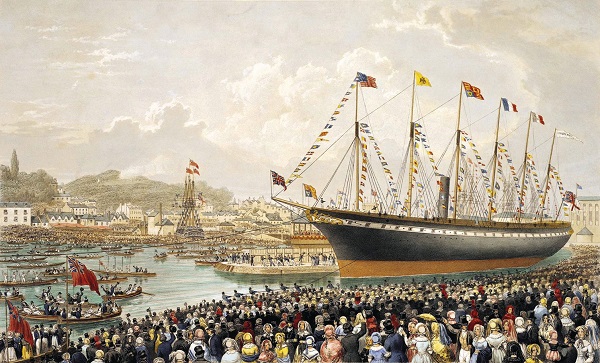 Brunel’s SS Great Britain was then the biggest ship in the world. Her wrought iron hull dwarfed the few iron vessels which were already used by the Navy and commercial ship owners. She also looked radically different from other steamships, which were usually flanked with bulky paddle wheels.

Back in 1843, nobody really knew whether Brunel’s idea of combining the new technologies of screw propulsion and iron construction would be successful.

Not only was the ship more technologically advanced than any other, she was also much more luxurious than any that had before. Her interiors were modelled on fashionable London hotels. After her engines were fitted she was moored for a short time in London where thousands – including Queen Victoria – came to marvel at her.

When the excited crowds gathered in Bristol on 19 July to give the SS Great Britain a grand send-off from the dock where she had been built, she was already a pioneer several times over. This was the start of an inspiring story. 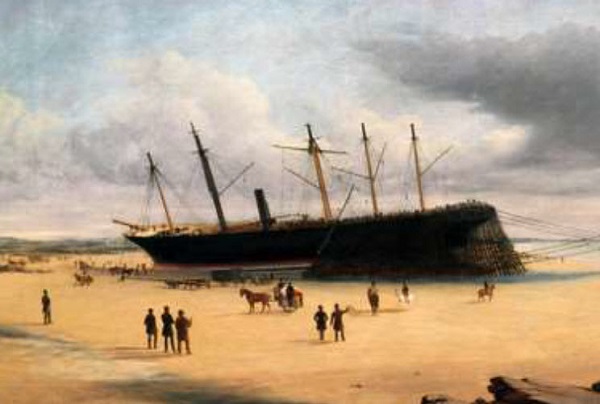 The SS Great Britain, along with the new dockyard, cost the Great Western Steamship Company £117,295 6 shilling and 7 pence to build. The company directors hoped for a profit on this marvelous new kind of ship, but out of 360 tickets only 45 were sold for the maiden voyage to New York.

Few of the early voyages went smoothly. Though the ship could cross the Atlantic in just 13 days, her propeller blades got damaged, she was grounded several times, and there were even engine fires. To make matters worse, on her fifth voyage in September 1846, Captain Hosken missed seeing the lighthouse on the Isle of Man and ran her aground at Dundrum Bay on the coast of Northern Island. Luckily the passengers, including a troop of Viennese dancing girls, were all led to safety.

Brunel visited his beloved ship as soon as he could, and organised sandbags, chains and a breakwater made of sticks lashed together to protect her. He wrote in a letter: “I was delighted to find our fine ship… almost as sound as the day she was launched”. But he was furious at the slowness of the salvage, because she was “lying, like a useless saucepan kicking about on the most exposed shore that you can imagine, with no more skill applied to protect the property than the said saucepan would have received on the beach at Brighton.”

The ship was lightened by removing her engines, coal, furniture and fittings, and she was finally towed off the beach on 28 August 1847. The grounding would have destroyed a wooden ship, but SS Great Britain’s strong iron hull ensured she survived. But the Great Western Steamship Company could not afford to pay for the salvage, and in 1850 it had to sell the ship to Gibbs, Bright & Company for just £18,000.

Australia the land of gold

Gibbs, Bright & Co. the ship’s new owners, made several changes to adapt her for sailing to Australia. They replaced the original rudder, propeller and engine and added a second funnel. With an extra upper deck added in 1857 the ship could carry up to 700 passengers.

The main change was the addition of more square sails, designed for the conditions the ship would meet in the southern oceans on her way to Australia. In 1857, Gibbs, Bright & Co added a lifting frame to hoist the propeller out of the water when it was not in use. With these adaptations, the ship could rely more heavily on sail power, and so save some money on fuel. The engine and propeller were used only as a back-up when the wind was light or blowing from the wrong directions.

On 21 August 1852, 630 people waved goodbye to their friends and families in Liverpool as the refitted and re-rigged SS Great Britain set sail to Australia for the first time. Many hoped for a better life on the other side of the world, and there was news of gold being found near Melbourne.

Sailing most of the way, but with the help of an efficient new engine, the SS Great Britain could travel more steadily than sailing ships which relied on favorable winds. She could run to a timetable, making the journey from Liverpool to Melbourne in around 60 days nearly every time; much faster than any sailing ship. Today, hundreds of thousands of Australians are descended from emigrants who arrived on the SS Great Britain.

Her route took her through extremes of heat and cold, light and dark. At the equator, the ship was so hot and stuffy that some passengers slept out on deck, hanging hammocks in the rigging. Further south they gazed at towering icebergs, which met the ship as she sailed through the South Atlantic.

Dozens of passengers’ diaries and letters have survived. They cover every aspect of life on board, from the terror of a storm in mid-Atlantic to the quality of the porridge and the Captain’s temper! For many passengers, the journey to Australia or back to England was the greatest adventure of their lives.

Taking on the worst seas in the world 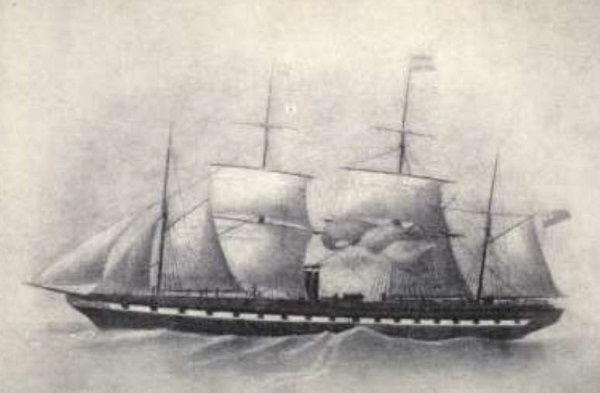 The SS Great Britain was a remarkably adaptable ship. After 30 years as a passenger ship, she was converted to carry cargo.

In 1882 the SS Great Britain’s engine was removed and so was her funnel. Without an engine, the ship had more spare inside for stowing cargo and she was cheaper to run.

She became a super-sized sailing cargo ship with three tall masts and broad square sails. This kind of ship has become to be known as a “windjammer.”

Between 1882 and 1886 the SS Great Britain carried Welsh coal from Penarth around Cape Horn to San Francisco. On the return trip, her cargo was wheat from the American prairies.

When travelling between England and the west coast of America ships faced the wildest seas in the world. The ship’s captain, Henry Stap, described what it was like in a letter to his brother on 27 December 1882: “The wind blew for five days…the ship rolled and labored so much that I expected the mainmast to go every minute…One man fell overboard and drowned as we could not render him any assistance.”

The SS Great Britain had an extraordinarily long working life because she remained economic to run from 1845 to 1933. The Falkland Island Company used the SS Great Britain as a storage hulk – a floating warehouse for coal and wool. After 47 years, in 1933, she became too old to be safe even for this use.

In 1937 she was towed to Sparrow Cove, a remote, windswept bay, scuttled to the shallow seabed and abandoned. For many years her only visitors were Falklanders having picnics, and curious penguins. This might have been her last journey – but she has always been a lucky ship.

Ewan Corlett, a naval architect, refused to let the SS Great Britain rust away. He helped organise a rescue operation which would return the ship to the UK. An Anglo-German salvage team managed to re-float the rusting hulk, and load her onto the only pontoon in the world that was big enough to carry her. The SS Great Britain crossed the Atlantic sitting on Mulus III, a huge floating pontoon pulled by tugs. This amazing salvage brought her 8,000 miles home to her birthplace in Bristol. 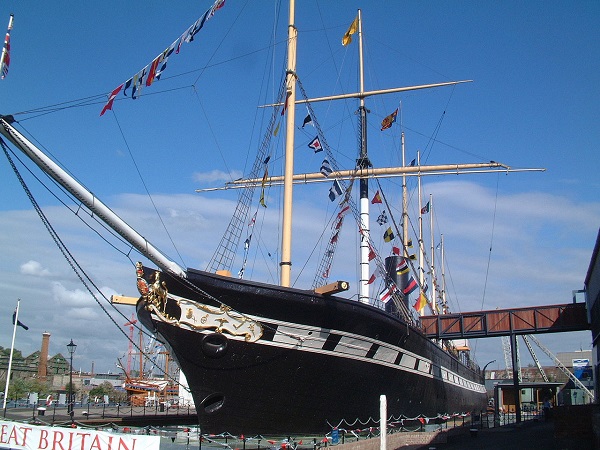 The SS Great Britain now rest in the very dry dock where Brunel built her. She is home and dry, but the iron hull is vulnerable to corrosion.

The ship sailed the world 32 times, travelling more than 1,000,000 miles at sea. During this long working life the salts – or chlorides – from the sea water seeped into her structure and became trapped in the molecular structure of the wrought iron plates. These chlorides draw moisture from the air into the iron, leading to rapid corrosion. This corrosion didn’t stop once the ship was taken out of the water and will continue if it isn’t prevented.

The mizzen mast of the SS Great Britain is mounted proudly on Victory Green in central Stanley. 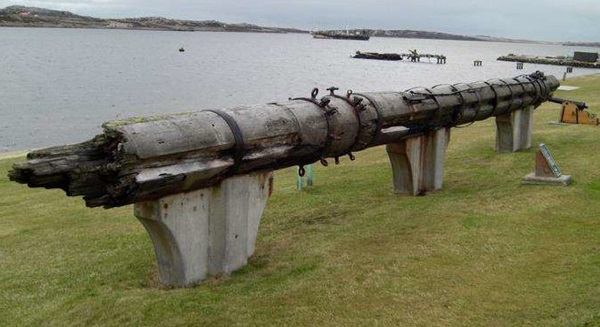 The article of the salvage and pictures was credited by Roy Martin; Lyle Craigie-Halkett (Risdon Beazley); Dieter Bronisch (Ulrich Harms GmbH); Text and pictures from Wikipedia and text from the Official Guidebook.